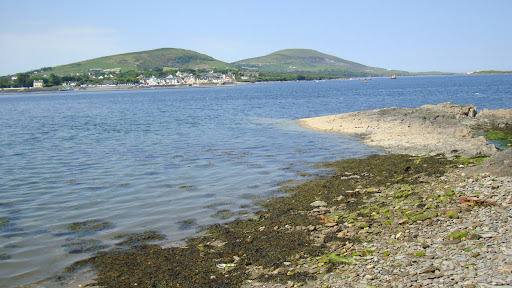 Valentia is said to have been home to Mug Ruith, a powerful blind druid in Irish mythology. The main island and its neighbouring islets are scattered with ancient Cairns, Dolmens, Wedge tombs, Standing Stones, Ogham Stones, a promontory fort, remains of churches, numerous beehive huts etc.

Exposure to the prevailing south westerly wind and  the warm currents the Gulf Stream give the  island its own remarkably mild micro-climate. However, visitors should be aware that this can entail very wet summers!

The island is traditionally reached by boat across Valentia Harbour from Reenard Point near Caherciveen, a service nowadays provided between March and October by a small roll on / roll off car ferry; a new passenger service to / from Dingle was introduced in summer 2010. More prosaically, Valentia has been connected to the mainland by a bridge at Portmagee since 1970. 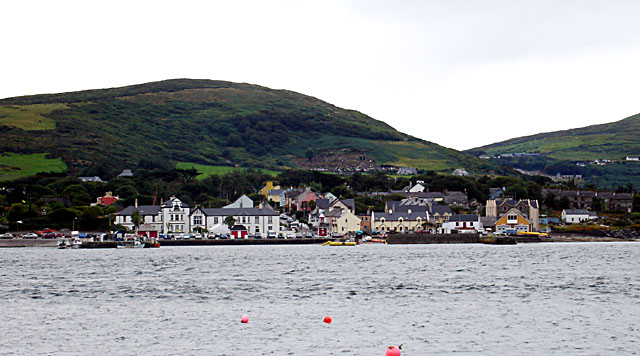 (The English toponym refers to the island’s former landlords, the Knights of Kerry, a branch of the FitzGerald family. Their title was one of three hereditary knighthoods bestowed upon his kinsmen by Maurice FitzGerald, 1st Earl of Desmond (d.1356) who ruled the medieval Palatinate of Kerry. The three warriors so honoured were sent to aid King Edward III in his Scottish campaign, and the monarch distinguished them by the colour of their armour; the Knight of Glin was called the Black Knight, the Knight of The Valley was the White Knight, and the Knight of Kerry became the Green Knight – appropriately for at least one of his successors!)

The present charming village was designed by the great Alexander Nimmo in 1840 for Sir Maurice FitzGerald, 18th Knight of Kerry. The attractive streets and impressive terraced houses give Knightstown a rather special architectural character.

The Telegraph Station Houses were built in resolutely English style on the lovely seafront promenade in 1868 for the staff of the Cable Station, designed by Cork architect Thomas Deane.

The church of St John the Baptist (CoI), built in 1840, has a sensory garden. Sevices are nowadays only held during the tourist season. For several years the summer chaplain was Fr John Hunwicke, an English High Church enthusiast of the Latin Mass and the Glorious Mysteries of the Holy Rosary, who appeared anxious to prove to the locals that the Church of Ireland was not Protestant (!)

The church of the Immaculate Conception (RC) was erected in 1914.

An interesting monument incorporates a replica of the Altazamuth Stone used in 1862 by American scientists establishing precise distances along “the Great European Arc of Longitude”, finally achieved in 1866, when the new transatlantic telegraph facilitated synchronized celestial observations between North America, Valentia, the Royal Observatory in Greenwich and Omsk in Siberia. In fact only two Altazamuth readings were taken, one in Knightstown and the other in the Ural Mountains in Russia.

(An Astrolabe found by a boy on Coombe Hill in the 1840s is now kept in the National Maritime Museum in Dun Laoghaire (Dublin). It is presumed to have come from one of the doomed Spanish Armada ships in 1588)

Miss Maude Jane Delap (1866 – 1953) was born in Donegal, the fifth daughter of a Church of Ireland minister who moved to  Knightstown in 1874. A keen amateur biologist, he introduced his ten children to the delights of natural history at an early age.

As adults she and her sister Constance participated in a major British scientific survey of Valentia Harbour in 1896-7, and continued their collecting and research on marine animals, especially plankton. Maude discovered a number of new and rare species of jellyfish and other minute sea animals, leading to an offer of a career at the famous Marine Biological Station at Plymouth, but she preferred to live and work in Valentia. In 1928 a Sea Anemone was named after her; Edwardsia Delapiae. She was made an associate of the Linnaeian Society in 1936, a rare honour.

In 1906, upon the death of Rev. Delap, Maude moved with her mother and two sisters to Reenellen House, where they lived in frugal self-sufficiency and entertained “successive waves of nieces and nephews” every summer. While they ran a small local hospital and a Fishermen’s Hall for visiting trawler crews and other stray mariners, they still  regularly contributed observations to scientific journals, formed part of a British Museum team of whale stranding observers, and  sent several specimens for Dublin‘s Natural History Museum (including cumbersome whale bones). The last member of the family to die, Maude  was buried on the island she loved all her life.

Valentia Observatory was established near Knightstown in 1867 to record meteorological and geodetic data. The remains of an anemometer (aka ‘Cullum’s Cup’) can still be seen on Ballymanagh Hill. The observatory was moved to Caherciveen in 1892 but retains the name of Valentia observatory, and provides vital weather information for Atlantic shipping forecasts, broadcast twice daily on the radio.

Charles A Lindbergh, nicknamed “the Lone Eagle”, reached Ireland on the first non-stop flight from New York to Paris on May 21st 1927. He circled Valentia in his single-seat, single-engine monoplane, Spirit of St Louis, displaying his wing numbers (RX21 I) for the Western Union Transatlantic Telegraph Cable Station to report his progress to the waiting world.

With a mixture of islanders (mostly living from farming and fishing, still  mainly Irish speaking at the beginning of the C20th), botanically-minded gentry, naturalist spinsters, resident telegraph / observatory / radio station personnel (scientists, engineers, electricians, clerks etc.) and their families and visitors from all over the British Isles and the USA, Knightstown must have had an unusually cosmopolitan ambience over the years. Still an atmospheric village, it can become very lively in summer.

The Royal Pier Hotel, a pleasantly old-fashioned establishment, serves good bar  food all year round, and has a beer garden in summer that acts as a major social centre for locals and tourists.

The village has a number of B&Bs (the Atlantic Villa is particularly highly recommended), self-catering holiday homes, two pubs and some good eateries, notably Knight’s Town Coffee (founded 1888) with its delightful garden.

The Valentia Heritage Centre, housed in the former Knightstown National School (1861 – 1976), exhibits a range of curious artefacts and interactive displays illustrating historical and other aspects of the island.

Most watersports are catered for, from sailing and kayaking to scuba-diving. Boats can be hired in the harbour for deep-sea angling  / shark-fishing excursions, whale / dolphin-spotting outings, daytrips to the Skelligs or visits to explore the nearby islands.

Valentia Harbour and its islands

Valentia Harbour, the sound between Valentia Island, Reenard Point and Doulus Head, is a lovely stretch of clear, sheltered water, particularly recommended for scuba diving novices, as there is lots to see underwater, including  a trawler wreck at 12m, scallops, shrimps, lobsters and conger eels).

Beginish Island is a lovely island with a prominent Cromwellian watchtower and idyllic views. It is inhabited; the residential section is entirely on the western side of the island, where there is an extensive beach.

The island has  the remains of an early church site, a killeen, and a small standing stone with crosses inscribed on both sides It has been established that the island was inhabited around 1050 by a mixed Gaelic / Norse community, who left several huts, one of which has a lintel stone bearing a Scandinavian rune.

Archaeological excavations have revealed early field systems, and more unexpectedly, a reasonably preserved semi-submerged dwelling with a ramp leading down to the doorway. This construction is unique for its time and is accepted as a Viking settlement. It was probably used as a stopping place during sea voyages between Cork and Limerick. Further digs are planned to reveal an expected burial ground.

Church Island can be reached on foot from Beginish at very low tide. side. It is named for its rectangular church, two walls of which are in ruins. There is also a good circular dwelling. The wall around the island marked all ground inside as consecrated. Only Holy Men could sleep inside. A small gap, still visible, allowed lay people day visits to the Church. There are also the remains of some sort of special grave.

Valentia’s Lifeboat station in Knightstown first opened in 1869, when it replaced the former Reenard Point station (1864). Closed in 1895, it operated an auxiliary lifeboat during WWII, and has functioned at full throttle since 1946. According to RNLI records, it has been in service well over 500 times and has saved some 400 lives to date. A history of the station and its heroic volunteer members is due for publication soon.