The Dingle Peninsula / Corca Dhuibhne (“seed / tribe of Duibhne”)  is the most westerly extension of mainland Ireland, and claims to be the westernmost points in Europe. The Irish name, commonly anglicised as Corkaguiney, refers to the deity of the túath who occupied the peninsula in pre-Norman times (who also held a number of territories to the south and east) and sometimes more specifically to the weird and wonderful district Beyond Dingle.

The landscape is wild and beautiful, from the eastern spine of the peninsula in the steep sandstone Slieve Mish mountains to the unnamed central mountain range further west, mighty Mount Brandon and associated summits in the north west, and the outermost tip where the land breaks into a scattering of dramatic uninhabited islands, notably Na Blascaoidi / The Blasket Islands, and cliffs and beaches alternate around the coast.

The peninsula has been inhabited for 6000 years, and is the location of numerous megaliths and other prehistoric remains, an exceptionally high density of early Christian sites and several interesting medieval ruins.

Apart from its stunning scenery, Corca Dhuibhne is probably most remarkable to modern eyes for its large number of clochans / beehive huts, drystone dwellings with corbelled roofs built between the Bronze Age and the C10th. These are often found at religious sites, where they were inhabited by Culdees (hermit-monks), and near Ringforts, where they would have had secular occupants. (Photo by Dirk Huth)

The Peninsula was a favoured location for hermits and religious communities in the Middle Ages, presumably for its remote isolation. At that time, it must have seemed the very edge of the world.

Successive Knights of Kerry, heads of a branch of the powerful FitzGerald family, appear to have exercised increasing control over much of the Peninsula from the C14th onwards.

There are records of several Spanish fish merchants residing in the Dingle area in the C15thand C16th, and according to an English historian, the then Earl of Desmond paid a formal visit  in the 153os to the Dingle lodgings of an ambassador of Charles V, King of Spain and Holy Roman Emperor. In a tract written in 1576, one John Dee complains much of “the intrusion of foreigners appon our seacoasts for fishing“, which, he says, “they frequent with as much security as if they were within their own King’s limits“.

A lot of damage was inflicted on the Peninsula during the course of the Second Desmond Rebellion, the Nine Years War and the Wars of the Three Kingdoms. Its remoteness and isolation may have protected it from the worst excesses of the Williamite War and the 1798 Rebellion.

The Dingle Peninsula suffered appallingly during the Great Famine. As an example, the following appeared in The Times of Jan. 6th 1849:

“—The Limerick Chronicle publishes the subjoined ‘black list’ of evictions in Kerry:

Lord Ventry’s land agent was DP Thompson. The other major C19th landlords on the Peninsula were the Hickson family, who lived near Castlegregory. Their estate manager was RM Hussey, who wrote Reminiscences of An Irish Land Agent (1904).

The Tralee and Dingle Light Railway operated from 1891-1949, with a branch line to Castlegregory. This line was very popular because of the beautiful scenery. However the light railway was dangerous, as demonstrated by two tragedies, the first when the train plunged off the Camp bridge in 1893, and the second some years later when the train was blown off the tracks by an exceptionally strong gust of wind.

David Lean‘s Ryan’s Daughter (1970), starring Robert Mitchum, Sarah Miles, John Mills, Trevor Howard, and Leo McKern, was mostly filmed on the Dingle Peninsula, contributing immensely to the local economy of the time and also putting the region on the map as a tourist destination. (Sadly, the village set did not survive).

Other films using the Dingle Peninsula as location include Ron Howard‘s Far and Away (1992), starring Tom Cruise and Nicole Kidman.

Deep Sea Angling boats are available in Dingle, Ballydavid and Brandon. Fishing trips are available by the week or by the day, as well as two-hour trips and evening trips. Some boatmen supply all the necessary gear, tackle and bait, and welcome children.

Fishing enthusiasts will be fascinated by two books written by award winning angling writer Bob Moss: A Guide To Shore Angling On The Dingle Peninsula and The Third Breaker; they can be bought directly from the author at bobmoss@iol.ie. 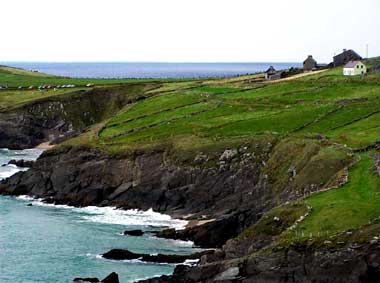 We wish to extewnd our thanks for several excellent images on these pages to the superb but anonymous photographer at http://www.inchphotos.com