Ballynahow Castle is an unusual C16th circular Tower House built by the Purcell family, now a National Monument. The walls splay at the base. It stands five storeys high with two internal vaults, each covering two storeys; one has a flat corbelled ceiling, the other is vaulted. A conical timber roof carried on squinch arches formerly covered the top storey. One of the thicker segments of the wall was cleverly used to contain the winding stair, mural chambers such as the latrines, and the entrance porch, with a “murder hole” above the door to drop things on unwelcome intruders. A number of small musket holes can be found near some of the principal windows.

Ballycahill’s old Norman church is fairly well preserved. An unusual feature is the bartizan overhanging the entrance. Ballycahill was a parish in its own right long before 1429, when the Earl of Ormond gave the village over to the care of the Abbot and monks of Holy Cross Abbey. The site is still in use as a graveyard.

Saint Cataldus’ church (RC), erected c. 1835, is an exceptionally elegant example of a C19th detached T-plan church with interesting stained glass windows, carved timber and a splendid altar. An ancient sandstone baptismal font, with two-compartmented octagonal bowl on a fluted column, is still in use.

Crossogue House (1860) and its 150-acre farm, frequently used for equestrian events at National level, belong to the Molloy family, who over several generations have bred and trained many top-class hunters, showjumpers, eventers and race winners. The premises is now run as a Guesthouse for riders (all levels) who want to hone their skills.

Farney Castle was originally a timbered structure built in 1185. Its location, adjacent to Farney Bridge, was historically strategic.

The unusual five-storey circular tower was built in 1495 by Thomas Butler, 7th Earl of Ormond. Having been occupied by a Cromwellian veteran, the property was acquired in 1660 by Stuart supporter Capt. William Armstrong, whose family lived in the castle for the next 200 years.

The castle features a mural staircase (built within the thickness of the walls) off which it is suspected that secret rooms still lie undiscovered. There is an oubliette or “murder hole” over the main door. The C18th extension, executed in the Gothic Revival style, is attributed to Francis Johnston, The complex set within mature gardens containing fine outbuildings and a demesne bridge.

Farney Castle is now the home, design studio and retail outlet of porcelain and knitwear designer Cyril Cullen, whose four daughters have acquired a measure of international fame as The Cullen Harpers. They give occasional recitals in the Castle Banqueting Room, which currently houses a collection of rare old and modern Harps.

Castlefogarty / Castle ffogarty was the seat of the last chief of the O’ Fogarty clan, Teige, who settled in the ancient townland of Garranroe in 1670. The last O’Fogarty to live there was his great-grandson James, who became Sherriff of County Tipperary in 1783 and died at sea in 1788. Under the ownership of the Ryan family. the castle was occupied by the Northampton Regiment during the War of Independence, and was burned down as soon as they moved out “to prevent it ever being used again as a barracks“. Today this fine building is in ruins except for the east wing.

Garranroe church is a ruin situated just inside the present-day entrance to the Castlefogarty estate. The little church was probably built soon after Holy Cross Abbey, and it was one of the churches that was ministered by the monks. Only the west gable remains, with a small carved shamrock-headed window. The foundations of the remaining walls can still be traced. According to tradition a little road known as Bohirnacrossy led from Farney Bridge to this church, which probably fell into disuse when the Norman church in Ballycahill was given to Holy Cross Abbey in 1429.

Templebeg/Templemichael in the Slieve Phelims is a ruined medieval church surrounded by a C19th graveyard. The hillside location is bleak, but commands wonderful views. The presence of an old well indicates that this site has probably been sacred since at least Early Christian times. There are some interesting graves, including one of a woman who died in 1854 aged 109, and an earlier table tomb bearing this jolly verse:

O Vain Unthinking Heedless Passing Man
Remember Death This World Is But A Span
Remember Sin Which Caused Us To Fall
When The Trumpet Sounds We’ll Rise Up At A Call.

Knockmehill (Cnoc Maothaill – “Bald hill”) is associated with a legendary early C18th outlaw called  Eamon an Chnoic (“Ned of the Hill”). Éamonn Ó Riain (1670 – 1724) was one of many Roman Catholic landholders forcibly dispossessed after the Williamite War, who rather than fleeing to the continent opted to become a lonely rapparee, was sheltered by an old flame, treacherously betrayed by a neighbour, and posthumously attained Robin Hood-like status in folklore. He is celebrated in eponymous ballads, one in Gaelic by the great blind bard Turlough O’Carolan (1670 – 1738), one penned in English in 1839 by novelist Samuel Lover, and another by Terry Woods, sung by the Pogues.

Upperchurch (pop. 1200) is a growing village with a reputation for dynamic community spirit. It has three well-regarded pubs, and three looped walks through the gentle surrounding hills. Inch is an attractively located village with an old motte and a medieval Tower House.

The local graveyard is a peaceful spot at the end of a lovely road ideal for strolling.

Inch is connected by a scenic route to Dolla on ByRoute 8.

Rearcross / Rear Cross is a small village photogenically situated between Mauherslieve (Mother Mountain) in the Silvermine Mountains and the Slieve Felim Hills. Its name dates from when it was in Cross County, the part of Tipperary under medieval Church control. The community welcomes visitors with a sign announcing a “land of ancient tombs, beautiful scenery and deer sanctuary“. 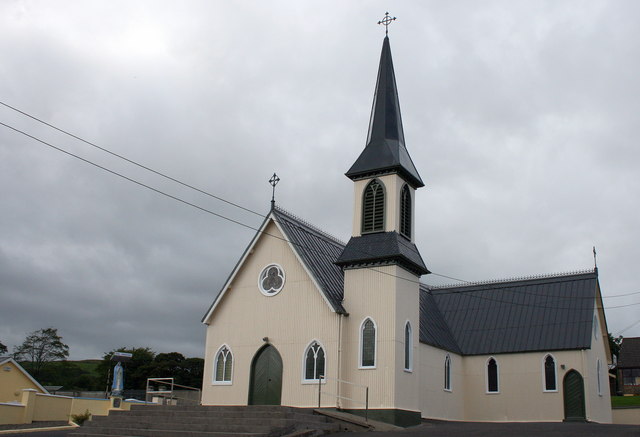 The church of the Visitation (RC), mainly made of tin, is often described as unique by bemused newcomers to the village. (Photo by Sarah777)

Designed by a Swiss architect for a Wesleyan congregation of miners in Northumbria, this type of pre-fabricated building was not uncommon in the late C19th, but most have since been demolished.

The  church was purchased in 1886 with funds raised on a trip by the parish priest to the USA. Dismantled and transported  to Limerick by sea, then brought overland to Rearcross, it was erected by locals with assistance from Sir Croker Barrington‘s workmen at nearby Glenstal Abbey.

It has a corrugated tin roof and walls, three galleries, a stained glass rose window in each gable and representations of Saint Thomas Aquinas and Saint William, neither one a common object of rural Irish life devotion, but by strange  coincidence corresponding to the first names of the principal American priest-donors.

Cullen / Cullaun Hill, at a vertiginous 462m, is the highest of the Slieve Felims. The area is quite heavily forested, providing a good habitat for wild and farmed deer.

Shanballyedmond court-tomb, on a hillside overlooking the Bilboa River, beside the road leading south from the village, is the southernmost outlier of the type in Ireland and the only such grave in County Tipperary. Court tombs, built in the Late Stone Age (c. 4,500-5000 years ago) are most commonly found in Co. Mayo and Co. Donegal.  When excavated in 1958, Shanballyedmond was found to contain the remains of six people. One, an adult woman, was buried (unburned) outside the entrance to the tomb. The others, whose ashes were found in a pit in one of the chambers, included an adult man, a young adolescent boy and a child. The ground around the site has been rather over- elaborately landscaped.

The Baurnadomeeny wedge-tomb, aka Dermot and Grania’s Bed, is situated north of the village on a hillside overlooking the upper reaches of the Bilboa River below the higher mountains of Mauherslieve and Slieveciamalta. It consists of a large (4.3 x 1.25m) chamber built of and covered by large rock slabs, with an entrance portico at the Northeastern end. Its builders covered it over with a cairn of stones, and the whole monument was gradually buried by blanket peat over hundreds of years. When excavated in 1960, it was found to contain the cremated remains of more than 20 people, six inside the gallery, 15  outside, some in small shallow pits. The tomb was reputedly used as an IRA hideout during The Troubles 1918 – 1922. (Photo by kiona.be)

There is a 2.8m high Standing Stone in a nearby lane.

Reardnogy More, on top of Barnahu Hill overlooking the Bilboa River, 1km east of Baurnadomeeny, is a complex of 4 boulder burials, of a type more frequently found in the southwest of Ireland.