These pages,  linking the M3 Motorway‘s Junction 7 northeast of DUBLIN with Co. Longford, are still under construction.

Blundelstown in the Gabhra / Tara – Skreen Valley is the location of the M3 / N147 Interchange, inaugurated in 2010. The construction of the Motorway aroused great controversy due to its proximity to the Hill of Tara, one of the most significant ancient locations in Ireland, and negative impact on several related sites, notably the Lismullin / Tara Valley Henge, believed to have been used as a ceremonial enclosure.

The Lismullin Centre is an Opus Dei training, retreat, conference and seminar facility. 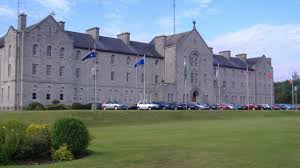 Dalgan Park, the headquarters of the Irish Missionary Union Institute, was founded in 1926 by the Columban Fathers, who named it after the estate near Ballinrobe (Co. Mayo) that they had previously acquired for the Maynooth Mission to China. Their forbiddingly grey barracks-like training College was opened in 1941, and nowadays also operates as a religious Retreat & Conference Centre.

The River Boyne flows through the extensive grounds, which contain scenic walks through beautiful parkland and woods inhabited by varied wildlife.

Dowdstown House, in the grounds of Dalgan Park, was designed  in a neo-Jacobite style by a Belfast architect called Lynn for Lieut. General Thomas Taylor, a retired British army commander who had fought at Waterloo and had the trees on his land laid out to represent the placings of the regiments at that battle, with tall trees signifying officers. Later in the C19th it became the home of his nephew Richard Chambre Hayes Taylor (1819-1904), who fought bravely in the so-called Indian Mutiny, served as Governor of Sandhurst Military Training College, was knighted and retired as a full General. His son Robert fought in the Boer War and WWI. After several years lying vacant, the house was acquired in 1926 by the Columban Fathers and remained their headquarters until 1967, when they moved to Dublin. It is now used as a Diocesan pastoral centre for grief and bereavement counselling. Bellinter / Ballinter House, a classic Palladian mansion beside the River Boyne, was designed in 1750 by Richard Cassels (1690-1751), and was probably the great architect’s last country house commission. (Photo by JP)

The house was built for John Preston, a wealthy Dublin merchant whose forebear, the Cromwellian soldier Thomas Preston, second son of Christopher Preston, 4th Viscount Gormanston, had built up considerable landholdings in County Meath and had been created Viscount Tara / Taragh in 1650 (the title had become extinct on the death of his grandson, the third Viscount, in 1674).

Bellinter was both a summer retreat and a functioning estate and farm. The main floor was the area to which the public was admitted, with the first floor being for real family life. The basements were for domestic work. Of the two side wings, one contained the servants’ quarters and the kitchens, while the other contained the stables. The grounds were perfect for the country gentleman’s pursuits of hunting, shooting and fishing. A private pack of hounds on the estate hunted under the name “Bellinter Hounds” and the house became famous for its lavish hunt balls.

John Preston, elected at the age of 18 as one of two representatives for Navan to the Irish House of Commons in 1783, held the seat until the Irish Parliament was abolished in 1800. His support for the Union saw him made Baron Tara, of Bellinter in the County of Meath, a title which died with him in 1821. Bellinter remained in the ownership of the Preston family until 1892.

Gustavus “Gussy” Briscoe, a colourful family friend who inherited the property, shared the Prestons’ passion for hunting and maintained the tradition of a pack of hounds at the estate, now known as the “Tara Harriers”. Shooting parties were held on the estate a couple of times a year, and the River Boyne provided excellent fishing – Gussy once caught nine salmon before breakfast. Once, after wining and dining extremely well, he rode his horse up the spiral staircase to win a wager. The horse refused to come back down and spent three weeks in the attic before a sturdy beam and pulley could be erected to lower the unfortunate animal back to terra firma.

The estate remained in the Briscoe family until sold by Gussy’s grandson in 1955. It was soon acquired by the Irish Land Commission, which subdivided the land into farms of 50 acres or less and abandoned the house itself. This was purchased in 1965 by the Sisters of Sion, a religious order dedicated to the improvement of relations between Jews and Christians, who initially turned to commercial growing of carnations and tomatoes and later ran it as a Retreat & Conference Centre.

Bellinter was bought in 2003 by its current owners, entertainment entrepreneursJay Bourke and John Reynolds, who run the complex as a luxury boutique spa hotel**** with superb dining and conference facilities, a well-stocked library, a bathhouse with an infinity pool, steam room, sauna, seaweed baths, outdoor hot tub and other leisure amenities plus health & beauty treatments for guests and private members. The hotel restaurant specialises in catering for small weddings and same-sex civil ceremonies, with a “Celtic monk” available to officiate. There are customised bedrooms both inside the main house and in adjoining pavilions with names like the Ruin and the Lean-to.

The stately entrance, reached by a spectacular long driveway, is flanked by two lions. The hall has a majestic fireplace with a bacchantic mask carved from local Ardbracken stone, while the upstairs landing has elaborate plasterwork with Doric and Corinthian half columns and a wonderful oval lantern which floods the area with light. The proprietors’ dramatic leanings are evident in splashes of colour and whimsical touches throughout the house; a papery, longhorn wall sconce over the mantel in the billiards room; a fuschia feather hat adorning a wall in the den.

Bellinter is open to the public free of charge 363 days of the year. Free guided tours are provided.

Ardsallagh is a townland and district bordered to the southeast by a curve in the River Boyne, here spanned by a bridge.

Ardsalla House, an Elizabethan mansion and estate,  was long held by a branch of the Preston family headed by the Viscounts of Gormanston. It was the birthplace of heiress  Mary Preston, who married Peter Ludlow, grandson of Henry Ludlow, brother of the Parliamentarian general Edmund Ludlow. Their son Peter Ludlow (1730-1803) was created Baron Ludlow, of Ardsalla in the County of Meath, in 1755, and  Viscount Preston, of Ardsalla in the County of Meath and Earl Ludlow in 1760. By the end of his life he was the leading landlord in Navan town and district.

The titles were inherited successively by his two unmarried sons, Augustus and  George. The latter, a General in the British army, was created Baron Ludlow in the Peerage of the United Kingdom, entitling him to sit in the House of Lords at Westminster. The titles became extinct on his death in 1842, and he bequeathed all his property to his friend the 7th Duke of Bedford (6th Creation).

Lord John Russell (1792–1878), the third son of the 6th Duke of Bedford (6th Creation), was a Whig / Liberal politician who served twice as Prime Minister of the United Kingdom, notoriously holding office during Ireland’s disastrous Great Famine. In 1861 he inherited the Ardsalla estate from his brother, the 7th Duke of Bedford, and on being offered a peerage in his own right was widely expected to take the title of Earl Ludlow but in fact became both Viscount Amberley, of Amberley in the County of Gloucester and of Ardsalla in the County of Meath, and Earl Russell of Kingston Russell.

Cannistown church, aka Ardsallagh / Kilcarn church, was traditionally believed to have been originally founded by Saint Finian (470-540 AD), but the present edifice, long aka St Brigid’s parish church, was erected in the late C12th / early C13th, with alterations made to the nave in the C15th. It is now in ruins, but retains a fine chancel arch with foliage capitals, and above them, on the left, three dogs pouncing on a fox, and on the right, three figures with the central one holding a staff in his hand. In the wall above the arch, and also lying on the ground nearby, are other sculpted stones bearing grotesque animal masks and a rampant lion. 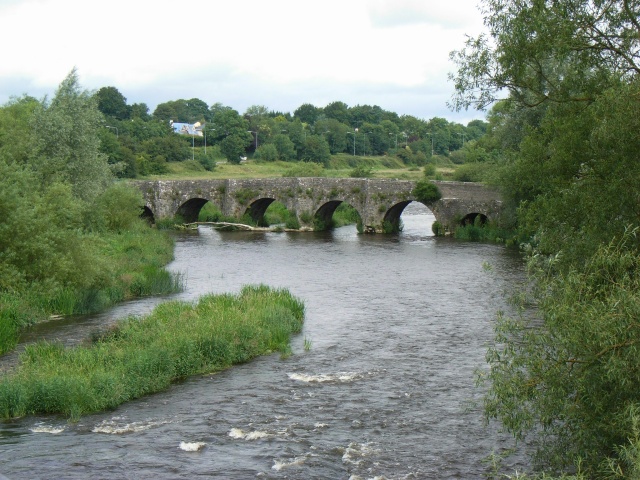 Kilcarn / Kilcarne / Kilcairn Bridge on the River Boyne, first erected c.1600, was in continuous use until 1977, when it was replaced by a modern structure. (Photo by JP, who comments “There have been many “Save Kilcarn Bridge” campaigns over the years and, judging from the state of the central cutwaters, it looks like another would be in order pretty soon“).