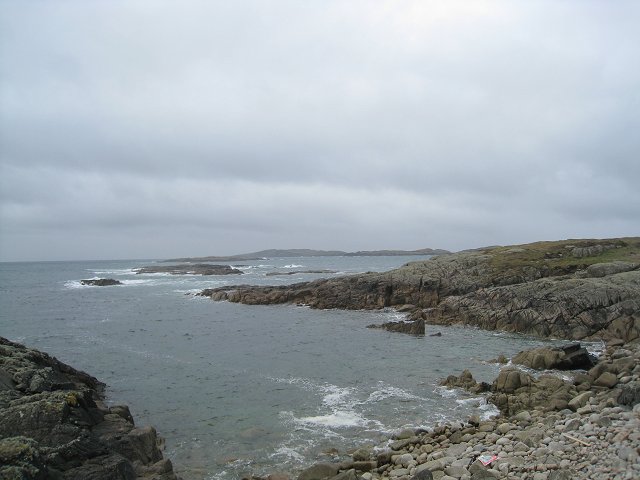 Claddaghduff /An Cladach Dubh (“the black shore”), a tiny community on the south side of the Aughrus Peninsula, derives its name from a sparsely populated townland in a district of exceptional beauty.

Daniel O’Connell held one of his Monster Rallies at Claddaghduff during his campaign for religious emancipation.

The Great Famine devastated Claddaghduff; like most of Connemara, this area used to have far more inhabitants than now, but many of those who did not succumb to hunger or illness were forced to leave the area.  Traces are still visible of a large number of abandoned dwellings left behind by emigrants to America (Boston in particular).

Grallagh is the location of a graveyard by the shore holding the remains of  children who died from starvation and disease.

Aughrusbeg is the name of an attractive lake near the village.

The Star of the Sea church (RC), designed by Thomas T Hamilton and completed in 1902, has an impressive interior. (Photo)

The Claddaghduff Community Centre is an amenity appreciated by all the inhabitants of the area, with regular musical and other social events.

An excellent picture by British photographer Archie Miles of local haymakers at work can be viewed here.

Claddaghduff Agricultural Show is held in late July every year.

The Omey Dash is a triathlon event hosted by Claddaghduff every August.

Omey Strand, scene of the annual Omey Pony Races every July,  is furnished with arrowed signs for walkers and drivers to follow at low tide to reach Omey Island. (Photo by Julian Matz)

Iomai / Iomaidh / Omey Island,  an inconspicuously low-lying island covered with sand and grass, roughly one square mile in size, is almost invisible from the mainland.

The name of the island derives from Iomaidh Féichin – “Féichin’s bed / seat”, referring to early C6th monastic settlement founded by Saint Feichin of Fore (d. 665 AD), who established many such communities across the west of Ireland and is considered one of the most important of the early founders of Irish Christianity.

Teampaill Féichin, a medieval church erected on the monastic site, still has most its vast stones in place, having been buried for centuries in sand until the local parish priest dug up the area surrounding it with the help of locals in 1981. Mid-1990s excavations by a team of UCD archaeologists uncovered one of the few known burials of a female within a monastic burial ground.

Other landmarks include Tobar Féichin, a Holy Well situated by the western edge of the island, which remains a place of devotions to this day, and the octagonal retreat built c.1969 by the poet and author Richard Murphy, son of the former British Governor of the Bahamas.

Omey gave its name to a former Civil parish, and still forms part of the  Church of Ireland’s parish of Omey Union.

Hundreds of people lived on the island in the early C19th, but the population steadily diminished until recently; for over ten years the only full-time inhabitant was the former stuntman and wrestler Pascal Whelan. Nowadays there are several houses on the island, occupied by local families and holidaymakers. The humans are overwhelmingly outnumbered by rabbits.

Artist Sean Corcoran sketched his impression of  a creature which he and his wife claimed to have witnessed  in the lake in 2003, and believed to be a Dobhar-chú (“Waterhound”) / Doyarchu / Dhuragoo /Master Otter, a cryptid beast appearing in Irish folklore. They described it as a a dark fast swimmer, about 5ft tall, with orange flipper-like feet, and said it emitted a snarl and a haunting screech. Sean Corcoran’s Omey Island Journal can be read here.

Ard Oileán / High Island is the location of another early Christian monastic site, also said to have been founded by Saint Féichin; one of the manuscripts of his biography is believed to have been written here.  Nearby there is a cross slab thought to date from the C7th. Tha Annals of Ulster mention that the island was where Gormgal of Ardoileán, chief confessor of Irelan, died in 1017. Between 1969 and 1998, the island was owned by Richard Murphy, who recalled in his memoir The Kick (2002) that when he heard the previous owner was selling: “I got excited at the thought of buying this inaccessible holy island, restoring the beehive cells and oratory of its derelict hermitage and preserving the place from destruction either by tourists or by sheep“.

The Aughrus Peninsula’s other offshore islands are Friar’s Island, Cruagh, Inishturk (not to be confused with the larger island of the same name to the north, off the coast of County Mayo) and Turbot / Talbot Island, where holiday cottages are available for  rent.

Cleggan (An Cloigeann) (pop. 300), a picturesque village situated at the head of Cleggan Bay, is the main fishing centre in this part of Connemara.

The toponym An Cloigeann (“head / skull”) may refer to the coastal headland, but legend has it that it originated c. 500 AD, when the early Christian missionary Saint  Gregory / Ceannanach was beheaded by a pagan chief, whereupon the headless saint carried his cranium to the Holy Well in Clooncree to wash it before lying down to die. A heap of stones, one supposedly stained with the blood of the  beheading, supposedly erected immediately as a monument to the saint’s martyrdom (unusual in Ireland those days) is said to mark very spot where he got the chop.

On 27th October 1927, a great gale arose without warning, and 25 fishermen from the local area drowned while mackerel fishing in the bay. The nearby village of Rossadilisk lost sixteen men and was subsequently abandoned. Nine men from Inishbofin and twenty men from County Mayo were also lost.

Due to the death of so many breadwinners, the area was devastated. The disaster and the devastation visited on the local families made international news and funds were raised from as far away as the UK, US and Australia.

The disaster, commemorated on stone markers, was the subject of  an eponymous book by local writer Marie Feeney (granddaughter of one of the survivors), a TG4 Documentary directed by Petra Conroy, and a poem by Richard Murphy in his 1963 collection Sailing to an Island.

Apart from fishing, Cleggan’s traditional source of income has  long been farming, difficult in the area’s blanket bog terrain.

Nowadays the community relies mainly on tourism, with a range of pubs (musical and otherwise), eateries  and accommodation options (B&Bs, self-catering etc.) In addition to trips to the local islands, popular leisure activities for visitors include  deep-sea angling, shore fishing, horseback riding and hill walking.

Cleggan Harbour is the mainland terminal for regular Ferries to / from Inishbofin, and there is also a boat link with Inishturk.

The Cleggan Beach Riding Centre is probably  Connemara’s best known place for pony trecking, attracting families for equestrian holidays from all over Ireland.

Cleggan Head, notable for its imposing cliffs and terrific views of the harbour, is crowned by the remains of a watchtower constructed during the Napoleonic wars and largely destroyed on 16th September 1961 by the only tropical cyclone known to have hit Ireland, “hurricane” Debbie, which killed 11 people in the British Isles.

Sellerna beach is overlooked by a hillside megalith said to mark the grave of a giant who was buried with all his treasures.

The Cleggan Music Weekend is held every year towards the end of June, with musicians, singers and dancers from near and far.

Between Cleggan and Ballynakill Lough, a lovely lake some 2km to the east of the village, is a fine collection of prehistoric monoliths, including tombs, Standing Stones and walls.

Ballinakill Lough is the site of St Ceannanach’s / Cartron church, now a poorly preserved medieval ruin within the traces of a much older enclosure; the remaining west gable has a beautiful twin light round-headed window with a small circular ope above, and nearby an ancient cross-slab has been reused as a gravemarker. The cemetery contains the grave of Oliver St John Gogarty, described by one guide as “the C20th Irish writer and statesman who wrote the acclaimed Gulliver’s Travels” (!!).

Moyard, a scenically located village, is the address of a western branch of Avoca Handweavers, aka “the impossible shop“, famed for its excellent café.

Cnocnaraw Country Guesthouse, an elegant Georgian building byBallinakill Bay, won the National Guesthouse Gardens Competition four times in a row, and is highly recommended for the quality of its cuisine.

The Rosleague Manor Hotel **** is a graciously proportioned Regency house set in gardens planted with rare shrubs and plants surrounded by mature woodlands and overlooking a tidal inlet.

Run by a member of the locally ubiquitous Foyle family, the hotel is famous as an exceptionally peaceful place to stay, with a delightful conservatory bar, two lovely drawing rooms with log fires, and superb meals served in a classical dining room, open to non-residents by reservation.