Casla (“twisting creek” / “inlet from the sea”), aka Costelloe in English, is an Irish speaking village beside Clynagh Bay.

RTÉ Raidió na Gaeltachta has its heaquarters in Casla.

The Carraroe Peninsula (An Ceathrú Rua) (pop. 630) between Greatman’s Bayand Casla Bay, is attached to the mainland by a narrow isthmus near Casla / Costelloe.

An Ceathrú Rua is also the name of the main centre of population on the peninsula.  The village was long known in English as Carraroe, but this name no longer has any official standing.

An Ceathrú Rua is considered one of the most important Irish Gaelic speaking districts in the Connemara Gaeltacht, with the Connacht dialect of the language as the principal local tongue. However, all but a few of the oldest inhabitants can also speak English.

Áras Mháirtín Uí Chadhain is one of the Gaeltacht centres of Oifig na Gaeilge Labhartha (the Department of Spoken Irish) of NUI, Galway.  Courses are held for overseas learners as well as Irish university students. The centre is named in honour of Connemara-born Máirtín Ó Cadhain (1906 – 1970), a radical IRA militant who became Professor of Irish at TCD and is regarded as one of the most important Irish language authors of the C20th.

Foinse, the main national Irish language newspaper,  had its head office in the village from 1996 to 2011. It is now published as a supplement to the Irish Independent.

Seawinds Nurseries and Tropical Butterfly Centre has hundreds of free flying exotic butterflies in their natural environment amid the lush vegetation of a tropical enclosure. Trá an Dóilín, aka “the coral beach“, is mainly composed of  fine maerl, the cast-up remains of coralline algae. Unlike coral, which is of animal origin,  maerl is formed by seaweeds growing in rock-like groups. With a long strand graced annually by the coveted EU Blue Flag, the beach is popular with scuba divers, including novices, and is probably the single most important centre for Galway Hookers. (Photo –www.seaweed.ie)

Féile an Dóilín, the largest Galway Hooker festival in Ireland, and one of the largest maritime festivals in the country, is held at An Cheathrú Rua every August bank holiday.  The 2006 Féile was the largest gathering in the history of Galway Hooker regattas.

Loch an Mhuilinn, a lake close to the village, has an interesting crannóg and is regularly used for Currach racing.

Cruinniú na mBád, an annual boat festival, sees a large flotilla of traditional Connemara vessels race across Galway Bay from An Cheathrú Rua to Kinvarra on the edge of the Burren. 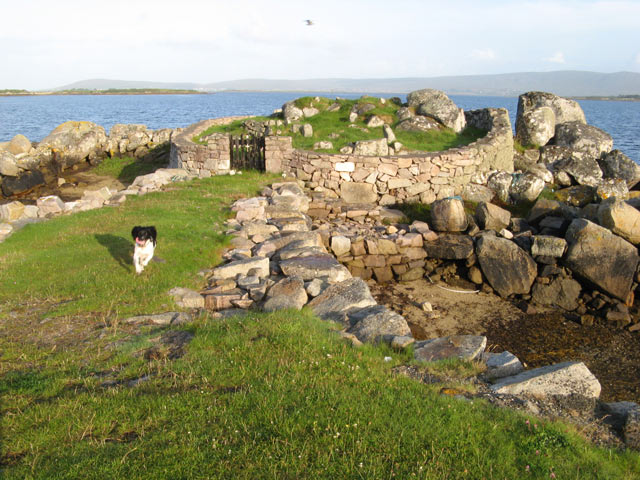 Cillín – a burial ground for the unbaptised, typically babies – on the edge of one of the wider parts of the bay. (Photo by Jonathan Wilkins)

Béal an Daingin (“mouth of the secure place” /  ”Dingle Harbour”), aka Bealadangan in English, is a small village where Sean Nós singing is still performed regularly.

Béal an Daingin is the location of the mainland link with Ceantar na nOileán (Gorumna / the Islands District), five South Connemara Islands connected by bridges and causeways.

Muicineach-idir-dhá-sháile (“piggery between two briny places”),”anglicised” in an 1830s boundary survey as Mwickanaghedderauhaulia and more recently as Muckanaghederdauhaulia, is said to have the longest toponym in Ireland. It is a low boggy townland jutting northwards  into Camus Bay from the Carreroe Peninsula, and has a road bridge link with Cinn Mhara / Kinvara.

Cinn Mhara ( “head of the sea”), aka Kinvara / Kinvarra in English, is a townland in the old barony of Moycullen, not to be confused with Kinvarra in south County Galway.

Camus / Camas (pop. 390), a village in the Connemara Gaeltacht, is divided into Camas Uachtair and Camas Íochtair, plus several other townlands.

The name Camus / Camas (both are used, though the toponym Camus, which has been in use for generations in both Irish and English, has been retained by the great majority of the population) is thought to derive from the shape of the nearby bay in which the tides come and go through the narrow strait at Dun Manus and enter Camus Bay at an angle, i.e.: cam uisce or crooked water.

Camus is also known in song as Camus na bhFoirnéis (“Camus of the furnaces”). It is believed that a small medieval foundry was operated close to the small bridge at the centre of the area.

Camus residents are known by their nickname of Maicíní (the etymology of this word is unclear, although it was common to give each village a nickname).

Coláiste Chamuis, founded by Gearóid and Máire Denvir, is a famous Irish language school, attended by hundreds of students from all over Ireland each summer.

An Scríob / Screeb, a small rural community, is best known for the surrounding system of interconnected fishing lakes.

Screeb House, nowadays a fishing lodge, was built by Thomas Fuge in the C18th, andbecame the residence of the Berridge family, the local landlords in the C19th. Frequent visitors included William Humble Ward, 2nd Earl of Dudley, controversial Lord Lieutenant of Ireland from 1902 to 1905 (and later Governor General of Australia) and his first wife Rachel Anne (née Gurney), who was drowned here in 1920; she was the founder of the Lady Dudley Nursing Scheme to provide District Nurses for Connemara, which lasted until 1974. The artist Sir William Orpen also stayed here, and drew inspiration for his work from the area, e.g. Old John’s Cottage, painted in the nearby house of Seán & Mary Geoghegan in 1908.

Screeb was the location of one of Ireland’s few peat-burning power stations, an uneconomic but welcome source of local employment.

Screeb Cross is a junction linked by the R336 to Maum’s Cross on the N59 across the interior of old barony of Moycullen.

An Gort Mór, usually anglicised as Gortmore, is technically a townland in the Rosmuc district, with great views of the desolate Twelve Bens / Pins / Na Beanna Beola to the northwest.

Rosmuc / Ros Muc stretches southward from An Gort Mór and the shores of Lough Invernagleragh in the form of  a long peninsula with a shape reminiscent of a distorted Britain, dividing Camus Bay from Kilkieran Bay.

Rosmuc is thought to have been first settled in  in 400 AD, only one hundred years before Christianity was brought to the area by Saint Briocán /Brecan, who according to legend sailed from here in a stone boat to Inis Mór in the Aran Islands, where he is said to have destroyed a pagan idol and is commemorated by the ruined Teampaill Bhreacain, one of the famed Seven churches

The old Irish word ros means “peninsula / headland” and muc can mean either “rounded hills” or “pig”. Those supporting the “the pig’s head promontory” theory claim a resemblance to a porcine cranium when viewed from the sea, recalling that maritime between the area, neighbouring islands in Ceantar na nOileán and further afield was common up until the early C20th.

Rosmuc / Ros Muc is also the name of the main village in the district, near the end of the peninsula. It was long known in English as Rosmuck, but this name no longer has any official standing.

Cill Bhreacáin / Kilbricken, the only other population centre of note, takes its name from a late medieval church, of which little remains apart from a roughly segmented arched doorway and some aubries, together with traces of the priest,s house an old Holy Well commanding splendid views.

Rosmuc is recognized as one of the strongest remaining Gaeltacht districts in South Connemara, or even the entire country, with Irish Gaelic the predominant spoken language, reportedly used on a daily basis by over 90%  of adult inhabitants.

Pearse’s Cottage, which attracts up to ten thousand visitors each year, was for a time the summer residence of Patrick Pearse / Pádraig Mac Piarais (b. 1879),  who  first came to Rosmuc as an examiner for Conradh na Gaeilge in April 1903 and was so struck by its landscapes and people that he built a holiday home with a magnificent view of Loch Eiliúrach.

It was here that Pearse wrote many of his pieces, including Irish language poems and short stories set in the area and his famous oration given at the grave of O’Donovan Rossa the year before the 1916 Easter Rising that led to his execution.

The interior, although burned during the War of Independence, has been reconstructed and contains a number of mementoes of Pearse.

Inverbeg, a 68-acre estate developed by the Guinness family as a fishing retreat in the 1840s, is based around Lough Invernagleragh. The main house,  Inver Lodge, is built on a lake island and can only be reached by pontoon. It was owned and regularly used by Lord Dudley, the Lord Lieutenant, at the same time as Patrick Pearse was staying in his cottage across the road.

Seán Ó Mainnín / Mannion, born in Rosmuc in 1956, was a champion boxer in the USA, fighting out of Dorchester, Massachusetts, and winning the WAA World Title in 1985. Now retired, he trains amateurs locally.

Coláiste na bhFiann provides summer courses in Irish Gaelic for secondary school students from around Ireland, who stay with local host families. Long run on militaristic disciplinary lines, with automatic expulsion for speaking English, and sometimes likened to “a Provo training ground“, it was founded by the erstwhile IRA militant and widely respected Irish language promoter Domhnall Ó Lubhlaí (1931-2013), recently exposed (like the UK’s Sir Jimmy Savile)  as a serial rapist and sexual abuser of young teenagers; as in several similar cases in Ireland over many years, complaints  were systematically ignored. A belated official Enquiry is now under way. Slipway at the end of the road, Camus Bay (Photo by Jonathan Wilkins)

The Rosmuc district is bounded on the west by the Invermore River, part of the border between the old baronies of Moycullen and Ballinahinch,  and the traditional eastern frontier of Connnemara proper.