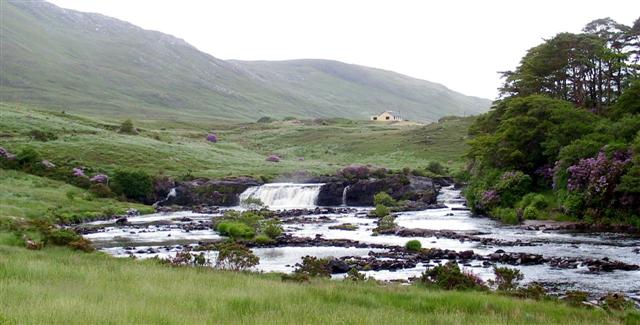 Aasleagh Lodge, a renovated country house beautifully situated near the famous waterfall and half encircled by a magnificent plantation of Scots pine, has sensational views over Killary Harbour and the mountains of Connemara.

The original Lodge, owned by the Marquess of Sligo, was a very large Victorian country house, burned down by Republican vandals in 1921. It was rebuilt on a smaller scale in 1926.

The Lodge was bought in 1969 by John Knatchbull, 6th Baron Brabourne, whose mother and 14-year-old son Nicholas were killed with his father-in-law, Lord Louis Mountbatten of Burma, and his wife, on 27th August 1979 in Mullaghmore (Co. Sligo) when their fishing boat was blown up by the IRA.

The Lodge was purchased by the State in 1981  in conjunction with the Central Fisheries Board and is currently managed by Inland Fisheries Ireland as a luxurious Guesthouse catering mainly for anglers on the Erriff Fishery, with an excellent restaurant serving top class sea food, home-baking, good wines and packed lunches.

Erriff Bridge is located next to pretty woollands,  laden with flowers in spring.

Carrowkennedy, a tiny village on the River Eriff within the district / parish of Aghagower,  is overlooked from the south by the Partry Mountains and from the west by the Sheffrey Hills, and is close to many scenic attractions.

The Carrowkennedy Ambush was an ambush carried out by the IRA on 2 June 1921, during the War of Independence.

The ambush was organised by Michael Kilroy (later Commandant of the IRA’s 4th Western Battalion). He and his flying column of 33 volunteers took up position between two widows’ houses and awaited an RIC police patrol. When a unit of Black & Tans arrived, the volunteers opened fire.

Seven of the British side were killed/died of wounds, and 16 surrendered. A large quantity of arms were seized. The captured Black & Tans who surrendered were not killed, even though this policy had been endorsed by IRA General Headquarters (for the terror and mayhem they inflicted on civilians).

Many local people went into hiding to avoid retribution. The volunteers escaped arrest by sheltering in safe houses.

The Field (1990), based on the play by John B Keane, directed by Jim Sheridan and starring Richard Harris, Brenda Fricker and John Hurt, was filmed 4 miles away in Gabhlan.

Liscarney is a village with great views of Croagh Patrick to the northwest.

The Boheh Stone, aka St Patrick’s Chair, is a national monument situated within an area occupied by farm buildings and dwellings about  7 km from Croagh Patrick.

What at first glance appears to be a pile of rocks is revealed under closer inspection to be a solid mass of stones carved with cup and ring markings, topped by a large flattish stone covering most of the surface. The flat top of the Boheh Stone stands at a maximum of 2.5m above the surrounding ground and extends horizontally for about four metres. The markings are on the top and sides faces and are badly weathered. The stones are believed to date to the Bronze Age.

For an observer standing on the west side of the monument, Croagh Patrick is prominent to the west northwest, showing an almost symmetrical profile. On certain dates in April and August the setting sun appears to roll down the slope of the mountain. It is believed that these days were interpreted as the most appropriate for planting crops in spring and harvesting them at the end of the summer. 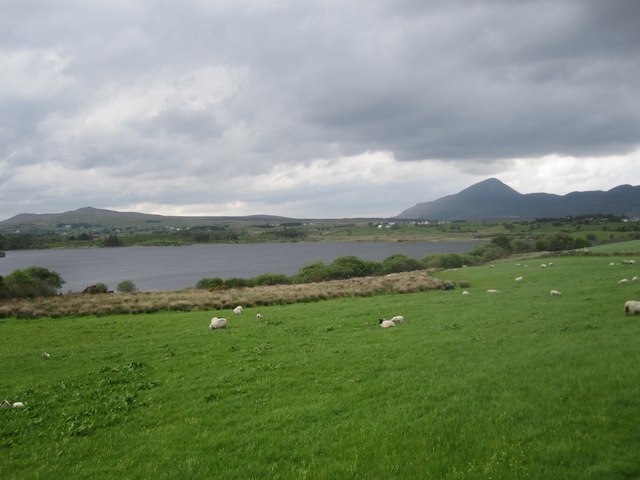 Moher Lough , south of Croagh Patrick, is another trout lake, surrounded by pastures dotted with sheep and cattle. (Photo by Keith Salvesen)

Aghagower / Aughagower (Achadh Ghobhair – “Field of the Springs”) (pop. 900) is a tiny village and rural district on the eastern fringe of the Barony of Murrisk. The modern Roman Catholic parish of Aghagower and the roughly coextensive old Civil / Church of Ireland parish of Oughagower both take in Westport.

Aghagower is primarily known for its ancient and cultural history, largely arising from the tradition that it was visited by Saint Patrick on his journey to Croagh Patrick. The village lies mid-way along the Tóchar Phádraig, formerly a part of the royal processional route from Croaghan (the ancient capital of Connacht), and later an important pilgrimage route fromBallintubber Abbey to the sacred mountain.

The Leaba Phadraig (“Patrick’s Bed”) is where the saint is reputed to have slept. Pilgrims used to perform “stations” between the bed and the Holy Well, Tobair na nDeachan (the well of the deacons) which has now dried up. Aghagower’s Round Tower, built between 973 AD and 1013, adjoins the partially restored medieval church. It is well preserved except for its topmost section and capstone, which according to legend was struck by lightning, and landed half a mile away on the Hill of Tavenish. A local woman is said to have carried the heavy capstone in her apron to the church, where it still remains today. (Photo by catb)