Carrigaholt (Carraig an Chabaltaigh – “Rock of the Fleet”) (pop3000) is a historic fishing port on a fine bay at the mouth of the Shannon Estuary. It is an attractive little town with not too many tourists, several great pubs and a couple of good eateries.

Carrigaholt Castle is a C15th Tower House with impressive ivied battlements and a murder hole just inside the entrance. (Photo by  GiollaUidir)

According to Lewis (1837) it was known as “Carrick-an-Outagh, or ‘the Ulsterman’s Rock’, said to have been built by a native of the county of Down“; whoever erected it originally,  it was the C16th residence of the MacMahon chieftains of the Corcabascin peninsula.

Teige Caech (“the shortsighted”) MacMahon refused aid to seven Spanish Armada ships sheltering in the bay in 1588, but the castle was nonetheless besieged by Crown forces under Sir Conyers Clifford, albeit inconclusively.

The stronghold was taken the following year after four days of fighting by Donogh O’Brien, 4th Earl of Thomond, who, in breach of the surrender terms, had all the defenders hanged; his great grandnephew, Daniel O’Brien, 3rd Viscount Clare, lived here when he famously recruited the Yellow Dragoons in the Jacobite cause during the Williamite War.

The castle was the residence of the Burton family from c.1700 for almost two centuries.

The Long Dock pub on West Street has stone walls, flagstone floors, wooden tables and warm fires, giving it a vaguely medieval but nonetheless cosy atmosphere, and provides a great selection of seafood – indeed, it has received the “Pub Lunch Award” from the Irish Fisheries Board. It also has regular traditional music sessions in the evenings.

Carrigaholt Pier & Beach, half a kilometre to the east of the village, is an ideal location for bottom fishing for dab, flounder and dogfish using crab, fishbait and lugworm. Conger can be taken on the outer wall of the pier.

The Dolphin Watch companyoffers 2-hour boat trips to observe the local Bottlenose dolphins and sea birds, and with luck see some whales

The Glencarrig B&B and Sea-Angling Centre, a big old house on the beach 1½ miles south-west of Carrigaholt, can handle parties of up to 8 at a time. Owners Luke and Mary Aston are delightful hosts.

The Loop Head Peninsula is a relatively little visited area of strikingly unspoilt beauty. Although not officially a Gaeltacht area, a good deal of Irish is spoken.

Kilcredaun is a townland named for the ruined church of Saint Credaun, who is reputedly buried on site. There is a holy well in this locality which was often visited in times past by the local people.

Kilcredaun also has a defensive battery built during the Napoleonic Wars as part of the Shannon Estuary Fortifications.

Kilcredaun Point is directly opposite Kilconly Point (Co. Kerry), and the line between them is the boundary between the Shannon Estuary and the Mouth of the Shannon.

Kilbaha on the Mouth of the Shannon has a post office, a pleasantly eccentric shop / pub called Keating’s and a pier where fishing boats moor and boats can be hired.

Kilbaha Bay has a mixed stone and sand beach. The adjacent road was severely damaged by Atlantic storms in January 2014.

The Little Ark was the ingenious solution devised  in 1853 by the parish priest in response to the local land agent’s prohibition of the celebration of Mass (an apparent attempt to force the populace to convert to Protestantism). The Ark was drawn in triumphal procession every Sunday for the next four years to Kilbaha Beach, where it was placed  in no-man’s land on the fore-shore and used as an altar for Mass. The sight of  several hundred people praying in all weathers attracted much publicity. Eventually, a site was given for the church, which was erected in 1858; the Little Ark was placed inside the new edifice and remains there to this day, housed in a specially built annexe.

Kiltrellig graveyard is the location of St Cuan’s Well, believed to have healing properties, especially f0r eye problems. It is still visited by local people and many from further afield.

Loop Head, properly Leap Head, takes its name from Leim Chon Chulainn (Cuchulain’s Leap), a legendary jump by that hero from the mainland to the crag some distance away, while evading the attentions of a witch / hag called Mal (the isolated fragment of cliff on which Cuchulain sought refuge is, for no clear reason, called Diarmuid and Grainne’s rock). The promentory is nowadays a strikingly remote spot, with a distinct “edge of the world” feel to it – nothing but wild flowers, shrieking sea birds and the surf pounding against the cliffs, combining to give at least one visitor what he called “a Tippi Hedren moment“.

The Loop Head Lighthouse is a magnificently lonely outpost, the last landmark between County Clare and America.

The Lighthouse Keeper’s Cottage is available for rent from the Irish Landmark Trust. The accommodation is absolutely traditional: the place has no telephone, television or microwave. The closest amenities are three miles away in Kilbaha.

The peninsula`s 10-mile stretch of Atlantic coastline is composed mainly of beetling overhangs, huge sea caves, sweeping slabs, imposing stacks and rock faces of up to 80m in height, facing out over the turbulent Atlantic.

Ross, on the Atlantic side of the junction at Clahansavane, .is regarded as one of the premier bird watching locations on the west coast of Ireland. Regular sightings include species such as Leach’s Petrel and Sabine’s Gull. The Long-tailed Skua (an extreme rarity in Ireland) has also been spotted.

The Bridges of Ross are a striking natural phenomenon formed by the battering of the Atlantic against the rocks. These ‘bridges’ sooner or later collapse and fall into the sea, but the endless erosion forms more; like sand dunes in very slow motion, the Bridges of Ross may change size, shape and location, but never disappear.

Teampail na Naoi Naomh (‘The Churchyard of the Nine Saints’) is an interesting weather stained ruin looking like a cabin. It. There are different stories of who built it. Similar churches along the west coast in the Dingle area support the theory that Saint Brendan is the most likely; Saint Senan is also mentioned. Until quite recently older people in the diocese kept the tradition of visiting the Teampail on Good Friday. The popular story goes that it is the burial place of nine of Saint Cuan’s companions;  the saint fell into mortal sin after they died, but later repented and built the Teampall in their memory.  Saint Cuan himself was buried in Kiltrellig, near the Holy Well that bears his name.

Doondillroe is the name of a local Promontory Fort.

Kilballyowen  church, a sturdy ruin near Cross village, dates from c.1500. This was long the parish church for the whole peninsula.

Rhineville Beach is a quiet sandy strand near Cross village.

Bishop’s Island, a column of rock rising dramatically from the Atlantic, is the highlight of the spectacular cliff scenery on the road to Kilkee. On its summit are the ruins of an ancient oratory, indicating that the column was formerly part of the mainland, where there is a Holy Well dedicated to Saint Caoidhe. 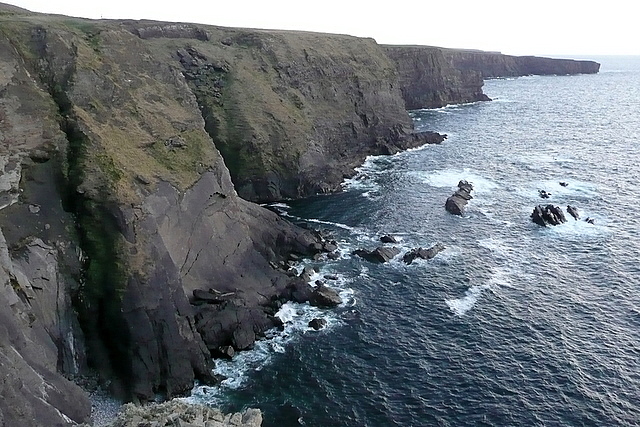 Coastline near Foohagh / Fooagh Point, a lovely place to visit at sunset. (Photo by Graham Horn) A nearby chalybeate spring once supported a spa resort.