Beal Point on the Shannon estuary is the most northwesterly tip of Co Kerry, noted for its sand dunes and strand. Tidal pulls of ocean and river make bathing hazardous here at certain times. Ship watching is a favourite pastime.

Beal Strand is popular with surfers of all kinds.

Ballylongford (Béal Átha Longfoirt – “Anchorage Ford Mouth”) (pop. 410) is a village situated at the top of Carrigafoyle Creek on the River Shannon Estuary.

The area was long dominated by the O’Connors of Kerry. Under Cromwell‘s Act for the Settlement of Ireland 1652, all O’Connor lands were confiscated, and in 1666 were granted to Trinity College Dublin, which remained the principal landlord in the Ballylongford area up to the passage of the Wyndham Land Act 1903. Indeed, some land titles are still vested in the college to this day.

The modern village dates from the end of the C18th, though a bridge over the ford existed long before then. The old bridge was destroyed by floods on 10th June, 1926, “a night the like of which the oldest could not remember, nor the youngest ever forget.” A reinforced concrete bridge was completed in 1930.

Michael O’Rahilly (The O’Rahilly), one of the founders of the Irish Volunteers in 1914, killed in the 1916 Easter Rising, was born in the village in 1875. Today, a plaque marks the house and a life-size portrait, presented to the village by his family, can be seen in Michael Finucane’s Public House, which was formerly the O’Rahilly family’s business premises. As a further homage, the Ballylongford GAA branch is known as “O’Rahilly’s Gaelic Football Club”.

Photographs taken at the turn of the last century show the village largely made up of thatched houses, but many of these were burned by the Black & Tans during the War of Independence; in November 1920 they shot Eddie Carmody, a local Irish Volunteer leader honoured by a memorial stone; his nephew became a Roman Catholic bishop in the USA.

Carrigafoyle Island (pop. 13) in the Shannon Estuary is joined to the mainland by a small bridge and a spit of marshy, grassy land, covered only by high spring tides. In addition to its eponymous Castle, the island also has an inhabited farm and a Napoleonic era defence battery.

Carrigafoyle Castle was built by Conchuir Liath Uí Conchuir (Connor Liath O’Connor) between 1490 and 1500, and thereafter used to “inspect” ships passing to and from the port of Limerick. (Photo by vbede)

The Siege of Carrigafoyle Castle began on Palm Sunday in 1580 during the Second Desmond Rebellion, and lasted two days. The castle was defended by an Italian, Captain Julian, at the head of 70 Papal / Spanish /  Irish troops. Sir William Pelham`s forces successfully breached the defences with cannon fire, the survivors were all hanged, and the Earl of Desmond’s silver plate, stored in the dungeon, was confiscated and sent to London.

Towards the end of the Nine Years War Chieftain John O’Connor briefly re-occupied the castle only to be evicted in 1603 by Sir George Carew, Lord President of Munster. King James I restored the castle to the O’Connors in 1607, but it was again captured in 1651 by Cromwellian forces under Henry Ireton‘s deputy and, after his death, commander in chief in Ireland, Edmund Ludlow, who “slighted” the castle, ensuring that it could never again be garrisoned, by knocking down the main defensive walls.

The castle, now listed as a National Monument, stands almost 30m high, and its battlements provide excellent views of the estuary and Scattery Island (Co Clare). In addition to fine windows and archways, it features a spiral staircase of 104 steps, ascending clockwise to the disadvantage of any right-handed attacker, which visitors can climb. The castle has its own dock. Lislaughtin Abbey (Lios Laichtin – “Lachtin’s Dwelling / Fort”), on the other side of the creek, was named for Saint Lachtin, the first to preach Christianity in the area. The current romantic ruin is of a Franciscan Friary established in 1478 by John O’Connor Kerry.(Photo by txcraig75)

Once one of the most important religious institutions in County Kerry, the Abbey managed to continue to operate in secret after King Henry VIII‘s 1540 Dissolution of the Monasteries. The Friary was sacked by English soldiers in 1580, and three monks were murdered before the high altar, but their priceless processional cross remained in hiding until found years later by a local farmer; known as the Lislaughtin Cross, it is now on display in the National Museum in Dublin. The last friars did not abandon the site until the mid-C17th.

The Abbey and its grounds have long served as the main Roman Catholic cemetery for Ballylongford.

The C14th Church of Aghavallin (Achadh Chonbhail – “the Hermitage Field”) was used as the Church of Ireland parish church until 1829, when the Glebe land on the opposite side of the road saw the construction of a new church (since demolished), where Henry Horatio Kitchener (1850 – 1916), subsequently Earl Kitchener of Khartoum, nowadays remembered as the face on WWI British Army recruitment posters, was baptised. The old graveyard contains a number of interesting tombs.

Brendan Kennelly, one of Ireland’s most popular poets and novelists, was born in Ballylongford in 1936. There is a festival celebrating Kennelly’s work each August featuring poetry, workshops, theatre, music, dance, literary and other events. Kennelly’s Bar, his boyhood home, is popular with locals and visitors alike.

Ballylongford is virtually due north of Listowel on ByRoute.

Tarbert (Tairbeart, from an Old Norse term meaning “draw-boat”, i.e. portage) is a village on the Shannon Estuary. It was a prosperous port and garrison town during the C19th and early part of the 20th century.

Tarbert House, begun in 1690 by John Leslie and not completed until about 1730, is a Queen Anne / early Georgian style house that has remained in Leslie ownership to this day.

The Leslies were always regarded as improving landlords, and were responsible for the layout of the town with its wide streets.

Visitors to the house over the years and have included: Dean Jonathan Swift, who famously remarked “The Leslies have lots of books upon their shelves. All written by Leslies about themselves“; Benjamin Franklin, who visited Sir Edward Leslie as part of his effort to rekindle trans-Atlantic trade relations; Daniel O’Connell, a family friend (one item on display is an 1813 plea to the British House of Commons for Catholic Emancipation signed by bishops, politicians and other notables, including “The Liberator” and his brother); Charlotte Bronte, who spent part of her honeymoon here; Horatio (later Lord) Kitchener, who lived locally as a boy, and used to gather seaweed on the foreshore for his mother’s bath to help relieve her arthritis; and Winston Churchill, who spent some of his school holidays at Tarbert House staing with his aunt Leonie Jerome, who was married to John Leslie.

Tarbert House has a fine collection of C18th furniture, including the best example of an Irish Chippendale mirror.

Tarbert Bridewell was built in 1831 as a Courthouse with attached Jail for the temporary confinement of prisoners prior to trial and (usually) subsequent removal to the County Gaol in Tralee. The elegant cut limestone edifice ceased to operate as a jail in 1874 but continued in use as a Courthouse for a further 75 years. Nowadays a historically informative exhibition depicting the full horror of the harsh C19th justice system shares the Visitor Centre with a café and a presentation of features the life & works of Tarbert poet Thomas McGreevy.

Tarbert hosts a Cuckoo Walking Festival on the first weekend of May each year.

Tarbert Island is linked to the mainland by a short isthmus – the site of the boat portage that gave its name to both the island and the town. 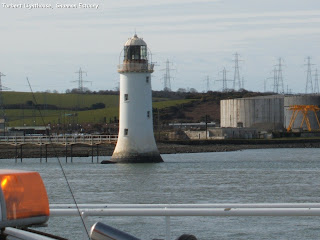 The small lighthouse was erected in 1834. (Photo by Peter Goulding)

The adjacent buoy yard has been in operation since 1916.

There is also an ESB electricity plant on the island, opened in 1969, with four oil-fired turbines and a capacity of 640MW.  This was the site of an explosion in 2003 that killed two workers and seriously injured another. It is due to be decommissioned in 2010, with the loss of 130 jobs.

A regular car ferry service links Tarbert Island across the Shannon Estuary to the village of Killimer (Co. Clare). The trip takes 20 minutes.

Tarbert is not far from Glin (Co. Limerick) on ByRoute 8.