Meenogahane Pier near Ballynaskreena is one of the few places on the coast between Kerry Head and Ballybunion where there is easy access to the shoreline of the Mouth of the Shannon. There is an ancient Ring Fort and some spectacular cliff scenery in the vicinity.

Ballyduff (An Baile Dubh – “the Black Village”) (pop. 620) is scenically situated on a hill above Cashen Bay where the Rivers Cashen and Feale jointly flow into the sea at the Mouth of the Shannon.

On 1st November 1920, during the War of Independence, the Black & Tans burned the creamery in Ballyduff to the ground and shot local man John Houlihan dead. 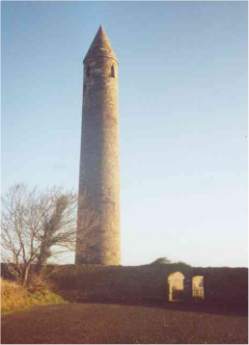 Rattoo Round Tower, thought to date from the late C12th, is the only complete Round Tower in County Kerry and one of the finest in the country.

It is not very big, with a height of 28m / 92ft, and a base circumference of 15m. There were six floors inside, with windows on the top floor facing the cardinal points, rendering it a perfect vantage point from which to spot marauding Vikings making their way up or down the Shannon.

Until the mid-C19th, the tower sat on a raised earth causeway in what was then a swamp.

The conical roof was restored in 1880, with the addition of a lightning rod. The workmen discovered an interesting Sheela-na-Gig, a plaster cast of which is now in the NMI.

It is not clear who built the tower. An early Christian monastic community is believed to have founded a on the site by  Saint Lugach, of whom little is known. Meiler FitzHenry founded a Preceptory of the crusading Order of Knights Hospitaller of Saint John of Jerusalem here c.1200 under a Fra’ William from Dublin. Later that century, the lands came into the possession of the Augustinian canons of the Arroasian Order, but records show that the Knights continued to be active in the area as late as 1325.

Near the Tower are the ruins of a C15th Priory church and abbey. The monastery was destroyed c.1600.

The Rattoo Heritage Museum and Interpretative Centre provides information on the archaeology, history and folk traditions of North Kerry.

The site is adjacent to Rattoo Great House.

Locals have included Edward Barrett, a remarkable  track & field athlete and all-round sportsman who won gold medals with the London GAA  team that won the  1901 All-Ireland hurling title, and with the London Police tug-of-war team at the 1908 London Olympic Games, when he also won a bronze medal for freestyle wrestling and participated in the Greco-Roman wrestling contest; and Fr William Ferris, a Sinn Féin propagandist, author of The Gaelic Commonwealth (1923) and many other works.

Ballyduff is quite close to Lixnaw on ByRoute.

Ballybunion (Baile an Bhuinneánaigh) (pop. 1400) is an old-fashioned seaside resort in a beautiful setting, and a popular holiday destination for a wide variety of visitors. The village is marred by amusement arcades and fast food restaurants, but also has several good pubs and restaurants and, bizarrely, a statue of US President Bill Clinton, who played golf here in 1999. Balllybunion is probably most famous for its two admittedly scenic golf courses (ranked in the top ten in the world) Ballybunion Castle, owned since 1923 by the OPW. (Photo by Martina O’Connor)

Ballybunion takes its name from William Bunyan, who acquired the C14th clifftop castle from the Geraldines in 1582, but lost it a year later for the role he played in the Desmond Rebellion.

The manor was granted in 1612 to Thomas FitxMaurice, 16th Lord of Kerry and Lixnaw, rebellious ancestor of the Marquesses of Lansdowne, and passed in 1783 to Richard Hare, whose son William Hare MP attained various titles culminating in 1822 as the 1st Earl of Listowel.

Ballbunion is on the Mouth of the Shannon. The mixed Atlantic and estuarine waters are pleasantly warm on sunny summer days, and local conditions are suitable for all types of watersport from bathing to every kind of surfing. Dolphins and porpoises sometimes play near the shore, seals are common, and sea otters can occasionally be glimpsed.

Ballybunion’s magnificent broad sandy beach, accessed by large, steep concrete pavements, was historically segregated as the Men’s Strand and the Ladies Strand; the latter, traditionally reserved for women and children, has a promontory with impressive-looking shallow tidal caves that can be explored at low tide.

The Nun’s Beach, a beautiful but inaccessible strand overlooked by a convent, has an arch called the Virgin Rock; it can be viewed from a scenic path along the top of the sheer cliffs, featuring a blowhole (The Nine Daughters Hole), views of sea stacks (including the Devil’s Castle) and abundant wildlife.

Ballybunion is famed for its Seaweed Baths, featuring seawater with kelp, and is also a good place to buy dulse / dillisk / sea grass / Palmaria palmata) and Irish moss / carrageen moss / Chondrus crispus; they taste vile, but apparently are good for you.

It is customary when strolling in Ballybunion to eat periwinkles, cooked, salted and served in small paper bags along with pins for extracting the sea snails from their distinctive little shells.

The Listowel & Ballybunion Railway , in operation from 1888 to 1924, ran on a highly unusual Lartigue monorail. (Ballybunion Postcard c.1900)

The system overcame several major problems ingeniously. A large number of turntables substituted points and level crossings.Coaches, with a compartment on either side of the rail, had to be kept balanced. If a cow was being brought to market, two calves would be sent also, to balance it on the other side. The calves would then be returned, one on either side of the rail.

It was not the speediest mode of transport imaginable. One story tells of the driver hailing a regular passenger, an old woman from Lisselton, travelling the opposite direction on a donkey and cart. The driver called out to her that he’d missed her that day. She shouted back, “I was in a hurry today so I took the ass & car!“

Ballybunion was the site of the first transatlantic telephone transmission, made in 1919 from the Marconi wireless station to Louisbourg, Cape Breton in Nova Scotia.

The Tintean Theatre, Arts and Cultural Centre is a performance space for traditional Irish music, dance and drama.

Ballybunion is linked by the R553 to Listowel on ByRoute.

Knockanore (either Cnoc an Fhómhair – “The Hill of Gold” or Cnoc an Áir – “The Hill of Slaughter”) (267m / 870ft) has inspired many legends, including one of a great battle at which thousands were supposedly killed, and another of hidden gold. The summit is easily accessible on foot or by car and, although somewhat cluttered with aerial masts and other structures, is well worth it for the lovely views.

Kilconly Point lies directly opposite Kilcreaun Point (Co. Clare); the line between them is the boundary between the Mouth of the Shannon and the Shannon River Estuary.