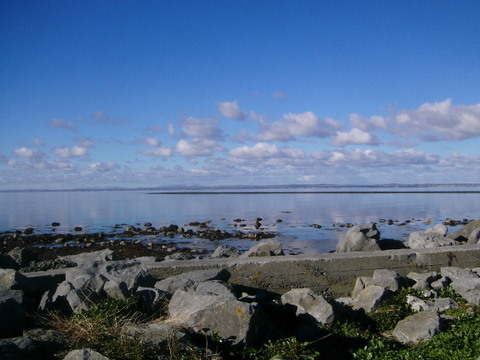 Aughinish Island, separated from the mainland by the tsunami effect of the 1755 Lisbon earthquake, is officially in County Clare, but can only be reached from the Newtownlynch (Co. Galway) side by a causaway built c.1810 and restored in 2006. The island’s remarkably sturdy Martello Tower, another smooth oval structure like its Finvarra Point sister, was long used for local ceilidh (dances), and has recently been converted into a private dwelling.

Kinvara Bay (Cuan Chinn Mhara), the inlet forming the southeastern corner of Galway Bay, is referred to in local lore as Loch Lurgan.

Kinvara / Kinvarra (Cinn Mhara -“Head of the Sea”) (pop. 1000) is an attractive harbour village located at the head of Kinvara Bay, (Photo –www.burrenconnect.ie)

Kinvara  was once a thriving port and a significant exporter of barley, lime, timber and seaweed, but the Great Famine and subsequent emigration devastated the region; the population did not begin to grow again until the nineteen eighties, when Continental immigrants began to reverse the trend.

Nowadays Kinvara is a prosperous community with a lively music scene, ten pubs and several good places to eat.

Saint Caimin’s church, now in ruins, was built in the C13th on the site of an earlier structure. It is an interesting example of the School of the West style of architecture in use in Connacht before the arrival of the Anglo-Normans.

Doorus House was built in 1866 as a summer home by Count Florimond de Basterot France. His neighbour Edward Martyn and visitors Lady Gregory and WB Yeats conceived the Irish National Theatre, later the Abbey Theatre, over afternoon tea here in 1897. The house is now an exceptionally pleasant An Oige Hostel with a walled garden & orchard restored by the local community and used for organic gardening /sustainable living courses.

Parkmore Pier at the mouth of the Bay is abuzz during the summer months with activities ranging from mackarel fishing and scuba diving to sailing, kayaking and canoeing.

Breacan Cottage at Parkmore Pier is a pleasant B&B run by Geraldine and Noel Linnane.

Kinvara hosts two annual festivals, Fleadh na gCuach (“the Cuckoo Festival”) at the start of May and Cruinniú na mBád (“Gathering of the Boats”) in August; the latter celebrates the traditional Galway Hookers. 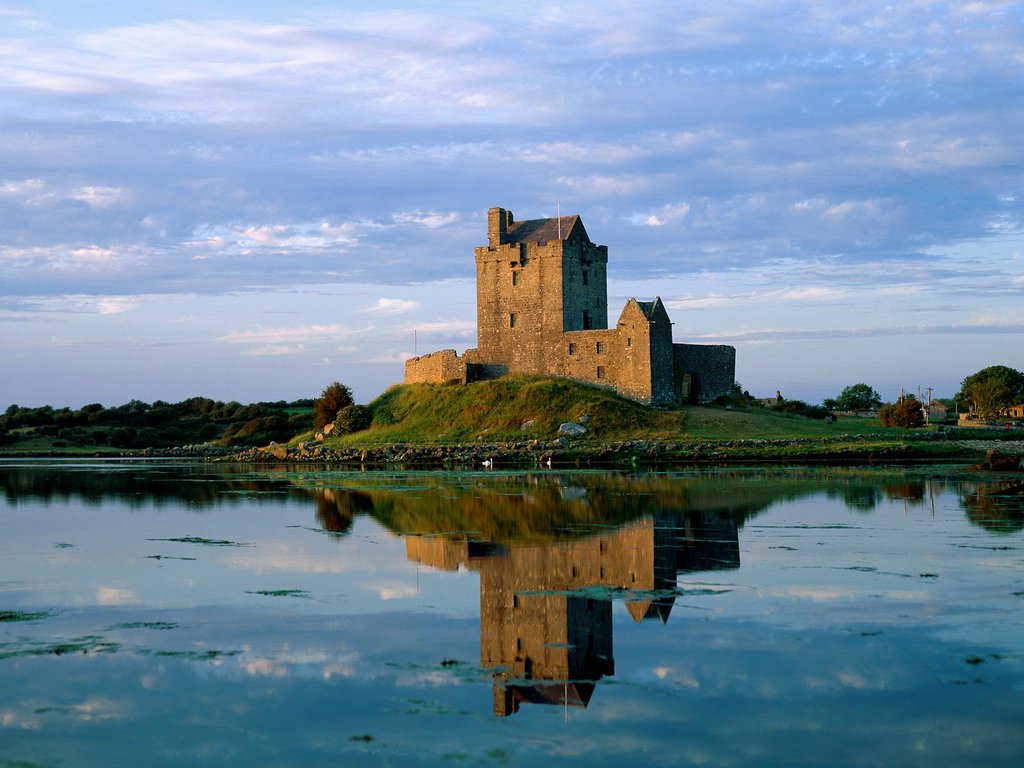 Dún Guaire Castle is a photogenic Tower House located to the east of the village. Originally the principal stronhold of the Hynes (Ó hEidhin) clan.

The enclosure on the small peninsula east of Dún Guaire is thought to be the remains of Ráth Dúrlais, principal residence of Guaire Aidhneach, the C7th AD king of Connacht and chieftain of the surrounding territory known as Ui Fiachrach Aidhne / Maigh Aidhne (“the plain of Aidhne”), coextensive with the Diocese of Kilmacduagh.

Dún Guaire was restored again in 1954 by Christobel Lady Ampthill (née Hulme Hart), the redoubtable divorcee and alleged virgin mother / adulteress at the centre of the celebrated 1920s “Ampthill Baby” scandal, who lived in the castle for 12 years,

In recent times the property has been run by Shannon Development as a Bunratty-style venue for ye olde medieval banquets etc.

Kinvara is a convenient base to explore the Burren in neighbouring Co. Clare.

Kinvara is not far from Gort on ByRoute.

Dunbulcan Bay, the most easterly inlet of Galway Bay, is said to produce the most succulent oysters on Earth.

Moran’s On The Weir / Moran’s Oyster Cottage, a 200-year-old thatched house with discrete modern extensions, owned and run by the Moran family for seven generations, is widely regarded as the best place in Ireland to enjoy oysters and other seafood with Guinness or champagne. It is not unusual to see visiting heads of state, royalty, film / rock stars etc. arrive by helicopter. Despite such acclaim, the pub / restaurant is unpretentious and its prices are quite reasonable.

Tyrone House, on a promontory jutting into Galway Bay,  was the main residence of the French / St George family from 1779 until 1905. Regarded as one of Waterford architect John Roberts’ greatest masterpieces, it was destroyed by arsonists in 1920 and was a ruin when acquired by the Irish Georgian Society in 1972. The atmospheric shell still dominates the landscape for miles around. (Photo by tomcosgrave)

The French / ffrench family, of Norman origin, were one of the (in)famous 14 “tribes of Galway” who dominated the city and county for many centuries. Jeffrey French was granted vast tracts of land in 1681. His brother, Arthur French “of Tyrone, Co. Galway” was Mayor of Galway in 1691;  in 1736 his grandson married Olivia Usher, sister of St George Usher St George of Headford, created Baron St George of Hatley St George (and father of the 2nd Duchess of Leinster).

Their son assumed the surname St George in 1774, and the grand hallway of  Tyrone House was presided by a life-sized white marble statue of Lord St George dressed as a Roman Emperor.

In their C19th heyday, the St George family were known as keen sports fans, helping to found the Galway Races and the Galway Blazers (still Ireland’s premier hunt).  Their wooded deesne included a well-stocked deer park, while their walled gardens contained apple, pear, peach and cherry orchards, with hothouses i use as early as 1838 to grow grapes. Christopher St George (d.1877) is credited with the development of the superb local oyster beds.

This delightful lifestyle came to an end with the redistribution of property under the Land Acts, and the once rich landlords were forced to seek their fortune elsewhere (mainly the USA, where a descendant, Chicago banker Gordon Mark, was a leading  fundraising champion for the Irish Georgian Society unti his death in 2009).

Many members of the French and St George families are interred in a gothic mausoleum in the graveyard of ruined Drumacoo Abbey, part of the remaining 3000-acre estate was vested in the Congested Districts Board in 1914. 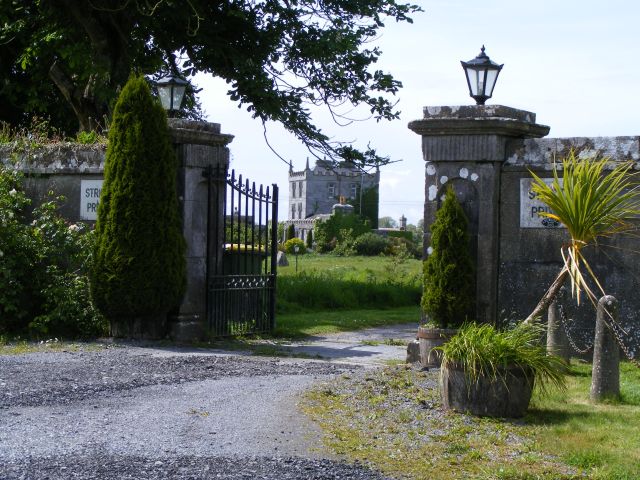 Kilcolgan Castle, of C12th origin, was rebuilt c.1780 as a Dower House by the French / St. George family of Tyrone House. (Photo by A McCarron)

At one stage it contained a bronze casket encasing the remains of a horse called Barebones, thus immortalised by one of the St George family whose life he had once apparently saved; unfortunately, this treasure was thrown into the river by a later owner, Martin Niland.

Restored by the late Hon WN Gustafson von Hillerstamm, the castle was until recently being made available by his daughter Karen for holiday rentals, wedding receptions etc., but is currently for sale.

Kilcolgan is not far from Ardrahan on ByRoute .

Clarinbridge (Drochead an Chlairín) (pop. 200), situated at the mouth of the Clarin River on Dunbulcaun Bay,  is attractively laid out around a walled village green where a cenotaph is dedicated to Sir Thomas Nicholas Reddington, the benevolent C19th landowner knighted by Queen Victoria for his efforts to combat the Great Famine.

Kilcornan House, reached by a spledid avenue, was built c.1830 by the Reddington family around a C16th De Burgo castle. Nowadays it is used as a training centre for people with learning disabilities.

The Clarenbridge Oyster Festival, held locally every September since 1954, is deservedly world famous.

Oranmore (Örán Mór) (pop. 3500), situated on Oranmore Bay in the northeast corner of Galway Bay, is a smug high-income satellite of Galway City. Oranmore Castle, a C15th Clanricarde Burke stronghold, saw action during the Wars of the Three Kingdoms, and was occupied by the Blake family until 1853. (Photo by Flying Snail)

In 1947 the castle was bought and restored by Lady Marjorie Leslie, the USA-born wife of Sir Shane Leslie, and is the current residence of Leonie King, daughter of the writers Anita Leslie and WWII submarine commander Bill King (who sailed solo around the world in 1933), and her musician husband Alec Finn of De Danaan.

The castle is available for holiday rentals, weddings, banquets etc.

A boulder dolmen, dating perhaps to 2,000 BC, stands near the castle.

Joseph Howley, a Republican who led a failed attempt to take Oranmore RIC Barracks as part of the  1916 Easter Rising and was assassinated by British agents in 1920, is commemorated by a statue in the town.

Renville / Rinville Park, a well-equipped modern amenity area created on the grounds of an old estate, features an extensive network of walks through woods and open farmland beside the sea

Renville / Rinville Castle, originally a Burke stronghold, long occupied by the Lynch clan, was the seat of the Athy family until 1819.

The park also contains a later Tower House and a mock medieval gatelodge.

The Oranmore Lodge Hotel****, formerly the residence of the Blake-Butler family, is said to be good.

Oranmore was the birthplace of Joseph Henry Blake (1797 – 1849), a land agent’s son educated at Eton, who at the age of 18 unexpectedly inherited the Ardfry Estate and became the 3rd Baron Wallscourt. Inspired by European thinkers and the Ralahine Commune on the Vandeleur Estate, he attempted to implement socialism amongst his tenants and joined the Young Irelanders’ movement, the Irish Confederation. He died of cholera in Paris.