These pages describe ByRoute 1 between Wexford Harbour and Cork City. 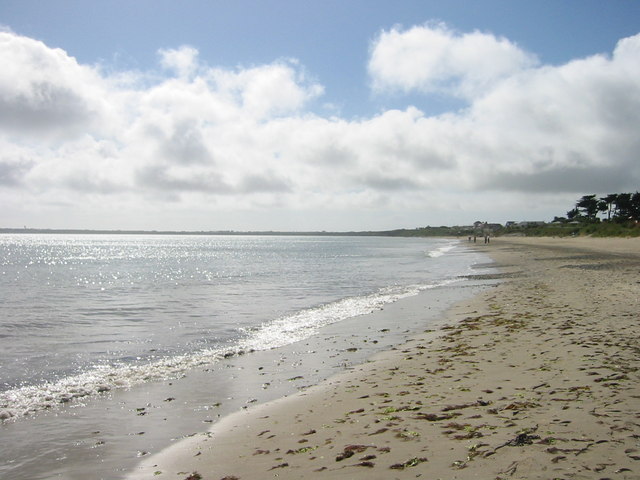 Rosslare (Ros Láir – “the middle peninsula”; alternatively Ros clár – ”the point / headland of the board / plank / wooden bridge”) prides itself on being the sunniest part of Ireland.

Rosslare Point, no matter what the maps say, no longer exists! It used to be a long spit of sand stretching northwards, almost touching Raven Point, giving Wexford Harbour a very narrow entrance. At the end of the spit was a small fort called Rosslare Fort. In the winter of 1924-25 a storm breached the spit and it was gradually washed away. The fort was abandoned and now all that is left is an island at low tide. Most maps of Ireland, however, still show a narrow peninsula.

Rosslare Point was the site of an early lifeboat station from 1838 to 1851, re-established as Rosslare Fort in 1859 following the wreck of the American emigrant ship Pomona, with the loss of 386 people. The station has since been replaced by a modern facility at Rosslare Harbour.

Rosslare village, aka Rosslare Strand to distinguish it from the nearby community of Rosslare Harbour (site of the Rosslare Europort), has been a tourist resort for at least 100 years, famed for its long golden sandy beaches.

The village saw a huge amount of building as tax grants were made available for building holiday homes in this region during the Celtic Tiger era. As a result, there are large housing estates near the strand, only partially occupied for most of the year. However, the resort becomes very crowded in summer with families and windsurfers.

Kelly’s Hotel, long one of the most famous family-run hotels in Ireland, is now the four-star Kelly’s Resort Hotel & Spa. It has two good restaurants and a laudable no-conference policy.

Rosslare Harbour (Calafort Ros Láir) is the name of the village that grew up to serve the needs of the dock facility of the same name (now called Rosslare Europort), first developed in 1906 by the Great Western Railway and the Great Southern & Western Railway to accommodate steamferry traffic between Great Britain and Ireland.

Although the harbour itself is located close to the previously existing settlement of Ballygeary, it was named after the village of Rosslare, some 4 km away (8 km by road) along the coast.

Rosslare Harbour village has a number of pubs, guesthouses, hotels, a bank and some shops.

Rosslare Europort is a modern deepwater seaport, handling passenger and / or freight ferries to and from Fishguard and Pembroke Dock in the UK and Cherbourg, Roscoff and Le Havre in France.

The port is operated by Iarnród Éireann, which provides direct rail services to Limerick and Dublin from Rosslare Europort railway station.

Greenore Point, reached by a small strand just south of the harbour, is  the southern extremity of Wexford Bay, and a good place to spot grey seals.

Kilrane (Cil Ruadhan “church of Saint Ruane”, an early Christian associated with the monastery of Lorrha, and with the cursing of Tara) has several B&Bs and a pub.

St. Helen’s Bay is named after the mother of Constantine, the first Christian ruler of the Roman Empire and founder of the city now known as Istanbul. Reputed to have dreamt of the place where the True Cross was found in Jerusalem in 335 AD, her Feast Day is on August 18th. Devotion to her was brought to this area by the Normans. From here there are fine views of the Tuskar Rock.

Tagoat is a friendly village in the once important Barony of Forth.

St. Mary’s church (RC), dedicated in 1846, is the most important of AW Pugin‘s Irish parish churches, containing more original Pugin features than any other, including a set of brass candlesticks of his own design. This was the parish church of the architect’s powerful patron, John Hyacinth Talbot MP. 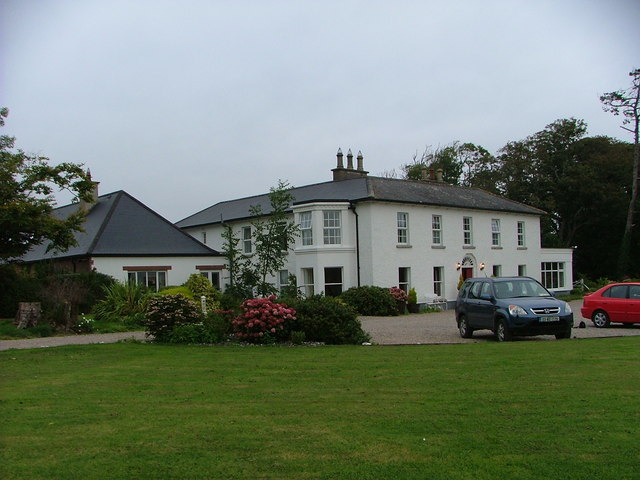 Churchtown House, now run as a pleasant Country House Hotel, is a rather special place to stay. Built in 1703, it was associated with some of the United Irishmen involved in the 1798 Rebellion, notably John Herron, executed with Bagenal Harvey on Wexford Bridge, whose namesake son later became one of Napoleon‘s favourite generals. (Photo by Dave Napier)

Yola was a dialect of middle English spoken in the Forth and Bargy area from 1169 until the 1850s. Apart from minor imports from Irish Gaelic, it went its own way, completely missing the Great Vowel Shift that characterised the change from Middle English to Modern English. It shared many characteristics with Devon and Cornwall English – commentators say its accent with similar – and lasted for some 600 years before being swamped in the 19th century by Hiberno-English following the  Irish Education Act 1830 that fostered English literacy through Ireland.

(To his Excellency, Constantine Henry Phipps, Earl Mulgrave, Lord Lieutenant-General, and General Governor of Ireland. The humble Address of the Inhabitants of the Barony of Forth, Wexford.

MAY IT PLEASE YOUR EXCELLENCY – We, the subjects of his Most Gracious Majesty, William IV, and, as we truly believe, both faithful and loyal inhabitants of the Barony of Forth, beg leave at this favourable opportunity to approach your Excellency, and in the simple dress of our old dialect to pour forth from the strength (or fullness) of our hearts, our sense (or admiration) of the qualities which characterise your name, and for which we have no words but of ‘Governor’, ‘Statesman’, etc. In each and every condition it is with joy of heart that our eyes rest upon the representative of the Sovereign, William IV, under whose paternal rule our days are spent; for before your foot pressed the soil, your name was known to us as the friend of liberty, and he who broke the fetters of the slave. Unto ourselves – for we look on Ireland to be our common country – you have with impartial hand ministered the laws made for every subject, without regard to this party or that. We behold in you one whose days are devoted to the welfare of the land you govern, to promote peace and liberty – the uncompromising guardian of the common right and public virtue. The peace – yes, we may say the profound peace – which overspreads the land since your arrival, proves that we alone stood in need of the enjoyment of common privileges, as is demonstrated by the results of your government………..)

The major documentation of the language was done by Jacob Poole around 1800: see Jacob Poole Of Growtown – And the Yola Dialect. His 1700-word glossary was published, edited by William Barnes, 40 years after his death, and is available in full online: A glossary, with some pieces of verse, of the old dialect of the English colony in the baronies of Forth and Bargy (1867). The glossary features a few examples of Yola folk songs.
The Graphic and Historical Illustrator for 1834 has an article on the district and dialect, Observations on the social habits and dialect of the Baronies of Forth and Bargy (commonly called “the English Baronies,” in the County of Wexford, which has the following anecdote:

And here it may be related, as a singular fact, that the Rev. William Eastwood, Rector of Tacumshane, Barony of Forth, while amusing himself one day in his field with a volume of Chaucer, fancied some of the obsolete words which met his eye resembled those which also met his ear, as his workmen conversed together: he accordingly called them around him, and commenced reading a page or two of old Geoffrey aloud, to their great delight, as they well understood the most obscure expressions, and often explained them better than the glossarial aids of Dryden and Johnson.

“Yola“, incidentally, means “old” in this language. It doesn’t appear to be what its speakers called it, but seems to have grown up among philologists due to the noted citation of a folksong, “a yola zong” (“an old song”). Several modern books repeat the factoid that Yola stands for “ye olde language” (“ye olde language” presumably – see Google Books), but this is bilge. No contemporary commentators mention this derivation, and pre 20th century acronyms are invariably suspect.

(With thanks to Ray on the Joel Segal books blogspot)

The old Baronies of Forth and Bargy are also noted for their tradition of Mumming.

Tagoat’s annual Steam Rally is one of the largest in Ireland.

Tagoat is within easy reach of on ByRoute 2.