Courtmacsherry Bay lies between the Old Head of Kinsale and the Seven Heads Peninsula. It is renowned for its excellent deep-sea fishing. 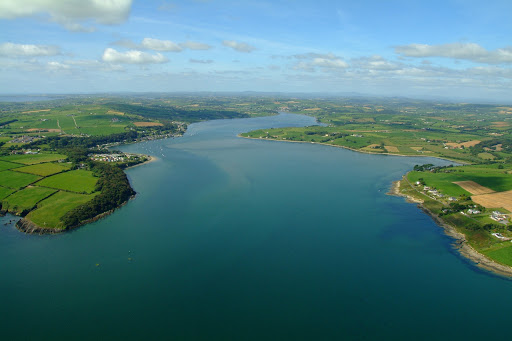 Courtmacsherry Harbour, effectively the tidal estuary of the River Argideen, forms a deep natural inlet at the head of Courtmacsherry Bay. Heavily wooded on its southern shore, it has several naturally secluded bathing coves. Seals are common.

The upper harbour is a bird watchers’ paradise, where heron, wild ducks and cormorant feed in a sheltered environment. In spring and autumn, up to 22,000 migrant birds have been recorded.

C18th smugglers along Ireland’s south coast were frequently ambushed from this sheltered haven by the Coast Guard, whose cottages still stand in a prominent position overlooking the harbour.

The main beaches in the area are Harbour View, Coolmain, Howestrand /Howe Strand and Burren (where, despite desperate rescue efforts, an 18m whale died stranded in January 2009; it is hoped to display the skeleton locally).

Kilbrittain / Kilbrittan (Cill Briotain) is a small village that gives its name to a scenic valley and coatal ditrict containing several interesting archaeological and historical sites.

Kilbrittain Castle, romantically located amid wooded hills overlooking Kilbrittain Bay, claims to be the oldest inhabited castle in Ireland.  An O’Mahony clan stronghold was erected on the site c.1035 and refortified at various times by the powerful McCarthy Reigh clan and the De Courcy dynasty, extended in the C18th and C19th by the Stawell family, partially burned in 1920, and restored in 1969 by inventor Russell Winn.

It is said that one of the great Irish manuscripts The Book of the MacCarthy Reigh /The Book of Lismore was written here; found hidden behind a wall in Lismore Castle in 1814, it is now in the National Museum in Dublin.

The castle, approached by a long driveway through handsome gardens with rabbits on the lawns, is currently the private residence of the Cahill-O’Brien family,who some years offer B&B accomodation facilities.

Coolmain Castle, erected in the C13th by the De Courcys and acquired in the C17th by the Stawell family, and later held by the Bernards, was bought a century ago by the then renowned American writer Donn Byrne, whose tombstone in nearby Rathclarin graveyard makes interesting reading.

Restored in the 1960s by the Hollywood photographer Bob Willoughby, the castle now belongs to Walt Disney’s nephew Roy, the last family member to play a leading role as a major shareholder and longtime director in his uncle’s famous film, cartoon and theme park empire.

Locals believe that the two castles were joined by an underground tunnel, long blocked up.

Glen Country House is an elegant restored farmhouse with limited but excellent B&B accomodation; evening meals can also be arranged.

Casino House, a Restaurant run by Kerrin and Michael Relja, is very highly regarded by gastronomes. Self-catering accommodation is available in Casino Cottage.

The Pink Elephant is another popular local restaurant.

Kilbrittain is connected by the R693 to Brandon on ByRoute 2.

Timoleague (Tigh Mologa – “House of Molaga”), a pretty village located at the point where the River Argideen enters Courtmacsherry Harbour, is a holiday resort with several good pubs and restaurants. 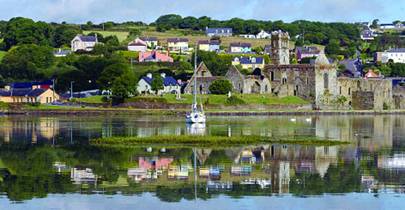 Timoleague Abbey, founded by the Franciscan order in 1240 AD, was built on the site of a C6th monastic settlement founded by Molaga, the saint who brought beekeeping to Ireland. At its height it was on of the most important in the country – and the monks had a nice sideline in smuggling Spanish wine. English soldiers sacked the abbey in 1612 and smashed all of the stained glass windows, but much of the significant architecture remains. The friars stayed in the abbey until 1629.

Timoleague Castle, nowadays most famous for its beautiful  Gardens, was built  by William Barry, Lord of Ibane c.1215.  Col. Robert E Travers acquired the land from the bankrupt  7th Viscount Barrymore and planted the Walled Garden in 1818, three years after the Battle of Waterloo. His descendants laid out the Lawn and Terraces c.1870 and have continued improving the gardens to this day; a River Garden has recently been installed on the Argideen. Their splendid Georgian mansion, Timoleague House, was burnt down by the IRA in 1921, to be replaced by a country house in contemporary style, not far from the medieval ruin.

It is said to be here that WB Yeats was moved to write the lines “… O what if gardens where the peacock strays / With delicate feet upon old terraces / Or else old Juno from an urn displays /  Before the indifferent garden deities / O what if levelled lawns and gravelled ways / Where slippered Contemplation finds his ease / And Childhood a delight for every sense / But take our greatness with our violence?.” (Meditations In Time of Civil War).

The church of the Ascension (CoI), erected in 1811, has a remarkable interior covered in mosaics, installed between 1894 and 1926 courtesy of HRH the Maharaja of Gwalior in memory of his medic, Dr Crofts from Timoleague.

The church of the Nativity of Our Lady (RC), a fine Hiberno-Romanesque structure built in 1912, contains a beautiful 3 light stained glass window by Harry Clarke, depicting a series of Biblical themes (1929).

The Timoleague Festival is a 10 day event held every August, with well-known singers and performers from all over Ireland.

Timoleague is linked by the R602 to Bandon on ByRoute 2.

The old Timoleague – Courtmacsherry Light Railway is long gone, but the path left by the tracks is now a pleasant walking route, part of the 9mi Seven Heads Walk along the coast. Mahon Abbey / Abbeymahon, overlooking Courtmacsherry Harbour, was built c. 1278 by Cistercians previously based at nearby Aghamanister, where the monastic community had been founded in 1172 by Diarmuid Mac Chormac Mac Charthaigh, king of Deas Mumhan (Desmond).

Abbeymahon Castle, next to the abbey, was erected by the once powerful Hodnett dynasty, of Norman origin, who “degenerated into mere Irish“.

One family member, Seafra (Geoffrey – Siofra in modern Irish), gave rise to the surname MacSeafraidh, anglicised as MacSherry. (A descendant of his, Patrick MacSeafraidh from Antrim, emigrated to America in 1745 and founded McSherrystown in Pennsylvania). Although some Hodnetts still live in the Courtmacsherry area, there are no McSherrys left.

Courtmacsherry (Cúirt Mhic Seafraidh) (pop. 530) is an exceptionally attractive one-street village on the southern shore of the harbour, surrounded by lovely woodlands. Many artists and crafts people live locally. There are several good pubs, eateries and places to stay.

The Pier is very busy in summer. Boats of various sizes are available for coastal excursions and sea angling trips, while yachts, dinghies and other pleasure craft jostle for pontoon moorings.

The Courtmacsherry Hotel was originally the summer home of the Earls of Shannon, the principal local landowners. The hotel is well reviewed, with the restaurant being particularly highly rated.

Richard Boyle, 2nd Earl of Shannon, merits particular mention for planting many exotic trees, shrubs and bushes in 1765, giving the whole district the air of a magnificent botanical garden. Visitors still enjoy the walks he laid out to Wood Point.

Woodpoint is a handsome C18th house built around a courtyard and sheltered within private woods.

Courtmacsharry RNLI Station is manned entirely by local volunteers. Originally based at nearby Barry’s Point, this historic lifeboat station was one of the first established in Ireland, and is proud of its almost 180 year record and many awards for bravery. 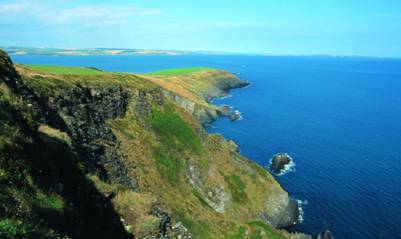 Lislee Glebe House, set in ten acres of mellow walled gardens and woodlands, is a classic Georgian country house with a considerably older wing, which has C16th flagstone floors and remnants of a Priests’ Hole. Lislee Self Catering Holiday Cottages & Apartments are housed in several attractively converted stone outbuildings on the small Estate, a former fruit farm.

Lislevane (“Fort of the Elm”) is a picturesque hamlet in the heart of the thriving farming area of Barryroe. It has several attractive features, including a decorative old Ford tractor and trailer painted bright blue and adorned with flowers.

Butlerstown is another scenic village in the parish of Barryoe.

Butlerstown House is a fine square Georgian mansion set on a hill, approached through an avenue of trees on 12 acres of land. Formerly an excellent B&B, it is now available as self-catering accommodation for groups.

Dunworley Bay is a very pleasant spot for a swim and a picnic, with views over Clonakilty Bay and its great variety of birdlife.

Dunworley Strand is a little sandy beach with big rocks; the sea here can be very rough at times. At low tide there are pools of green water and dark caves to explore and the massive rocks are studded with black shells, but at high tide there is no beach, just waves crashing into steep cliffs. 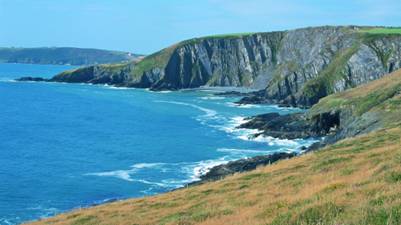 The Coolim Cliffs are the highest cliffs on the South coast.

Broadstrand Bay has a sandy beach with a dangerous reputation – for more than one reason. A German mine is said to have washed up on Broadstrand and exploded in 1943, shattering all the windows of Lislee House. In August 2007 another WWII German mine was found and destroyed by Irish Navy divers.