The Bothar na Clochan / Rocky Road is a scenic route through the Slieve Mish Mountains.

Rising above 2,500 ft (762m) in parts, the imposing Slieve Mish range was recorded in legend as the scene of a prehistoric battle during the invasion of the Milesians – the semi-mythical ancestors of the Gaels, who supposedly came originally from Egypt, settled in Spain, and arrived in Ireland c. 1700 BC. Their first battle took place against Banba, a queen of the Tuatha Dé Danainn. Magic was employed on both sides but gave way to fighting, in which the Milesian queens  Scotia and Fás were amongst those killed. Nevertheless, the invaders won not only the battle in Slieve Mish but the war for the dominion of Ireland. Three  Tuatha Dé Danainn kings and queens were killed, and their people were driven underground into forts and mounds where they became, in effect, the fairies.

Caherconree / Cathair Chonroi  (835 m / 2,740 ft), the second-highest peak of the Slieve Mish range,  is linked to Baurtregaum (851 m), to the east, by a narrow ridge. There are two deep glens either side of this. North of Caherconree’s summit is the long narrow mountain called Gearhane/ An Géarán.

Caherconree is named after a stone Ringfort that sits two-thirds of the way up its southwestern shoulder, overlooking the Bóthar na gCloch from a commanding position at a height of 2,050 feet (625 metres). A large projecting spur of the mountain, visible from many miles away to the west, is cut across on its north-eastern side by a  110m / 350 ft long wall, forming a triangular enclosure protected on its north-western and south-western sides by steep cliffs. The area enclosed is about two acres. The massively thick dry-stone wall stands to a maximum height of nearly 3 m, with sections of the inner face featuring three distinct steps.

Standing at a physical frontier between the Dingle Peninsula and the mainland, it marks an ancient tribal boundary between the territories of Corca Dhuibhne and Truich an Aicme. It faces and is clearly visible from Binn na Port, the remarkable Promontory Fort on the eastern side of Mount Brandon at the western end of the Lettragh, the lowland district on the northern side of the Dingle Peninsula, strongly suggesting that this area was a vital and powerful centre of activity in the Iron Age.

In Irish mythology this was the stronghold of Cú Roí mac Dáire, a respected tribal chief and demi-god, who could adopt many forms, and was able to make the fort often terrifying to his enemies, and even when absent he could defend the fort spin around at night to stop any attackers from finding the entrance.

In one of the Red Branch sagas, the three Champions of Ulster –  Cúchulainn, Conall and Laegaire – resorted to Cú Roí to resolve their dispute as to which of the trio was worthiest. He  instructed them to take turns in guarding Caherconree, and there attacked each of them in the form of demons. Conall and Laegaire were pitched over the wall by the monsters; but Cúchulainn stood his ground. However, he thought that the other two had jumped the wall as proof of their prowess, and decided to emulate them; he succeeded in an epic leap, but only just.  In another story Cú Roí kidnapped Cúchulainn’s lover Princess Bláthnat was and held her prisoner in the fort. When our hero came to rescue her, Bláthnat signalled that the time was right to attack by pouring milk in a stream now called the Finglas (Fhionnghlaise – “the white stream”) that rises  close to the ringfort.

Fin MacCool’s Chair is one of several curious rock formations on the mountain, accessible like the  fort only to experienced hillwalkers, who should beware of sudden mists and the deep gashes wrought by the Caherconree Fault.

The Finglas River Valley is exceptionally scenic, and there are fine walks with wonderful views in the vicinity, notably Gleann na Gealt and Glen Fás, where rhe Milesian‘s Queen’s son Amergin legendarily promised to name the newly conquered island after the vanquished Tuatha Dé Danainn‘s Queen Eire, there is an interesting old tomb with Latin and Ogham inscriptions.

Camp (An Cam) is a compact crossroads village just northwest of the scenic Slieve Mish mountain range, near the eastern end of the Lettragh, the lowland district on the northern side of the Dingle Peninsula. The area commands views of the Brandon Group of mountains, Tralee Bay, and Kerry Head. A long stretch of safe sandy beach, said to provide some of the best opportunities for bass angling in Europe, is enjoyed during the summer months by families spending their holidays in the adjacent caravans and campsites or staying at a local B&B.

Ashe’s Bar & Restaurant claims to have started life as a thatched  house selling whiskey over 300 years ago, making it the oldest pub in County Kerry.  Nowadays it serves good food and hosts traditional music sessions.

St Mary’s church (RC), built in 1826, is a handsome edifice with a belfry, set in well kept grounds.

Kilgobbin church (CoI) was built in 1825 on the site of several predecessors dedicated to a Saint Gobban, of whom little is now recalled; although both the easternmost pinnacles on the tower have lost their tops, this isolated little building, set in atmospheric grounds overlooking Tralee Bay, is otherwise well preserved. 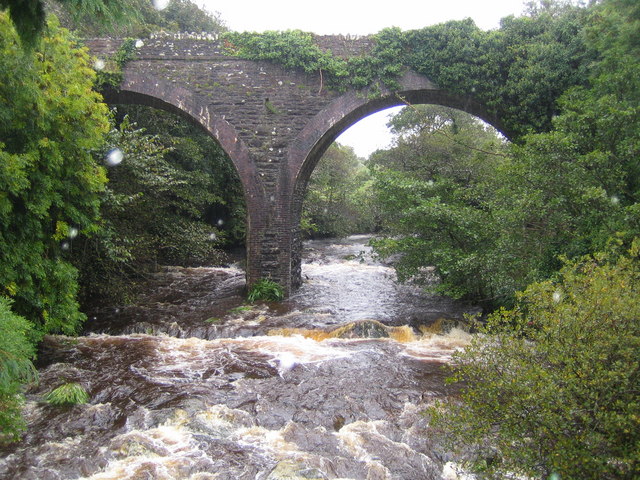 Camp Railway Viaduct was built to take the Tralee & Dingle Light Railway across the Finglas River. Opened in 1891, the 3ft gauge railway soon proved to be extremely slow and accident-prone due to high gradients and curves. On Whit Monday of 1893, Locomotive Number One came off the rails and fell 30ft to the river; 3 men and 90 pigs were killed. To ease the bend here, another structure was erected in 1907 a few hundred yards upstream. The railway continued to operate until 1951. (Photo by Nigel Cox)

O’Neill‘s Railway Tavern,  commonly known as “Mick Nail’s”, was built opposite the Railway Station in the early 1890s. Nowadays it is famed for its lovely views, singing dog, Volkswagen Beetle and railway memorabilia and great traditional music sessions: examples are available here, here and here

The  unprepossessing Old Water Tower is all that remains of a branch line to Castlegregory.

FitzGerald’s Junction Bar on the opposite side of the road used to be much frequented by railwaymen and passengers alike and was the cause of many delays. Nowadays it serves good traditional food and often hosts music sessions.

The Cottage Restaurant, formerly The Creamery, is run by a French chef called Paddy and is very highly rated for its fusion cuisine.

Camp is linked by the N86 with Dingle Town and is close to Castlegregory, the northeastern start / finish  point of a highly recommended tour of both parts of the Dingle Peninsula, incomplete without visiting the Blasket Islands.

Killelton (Cill Eilthín – “Saint Eltan’s church”) is an abandoned village with magnificent view over Tralee Bay. Once this quiet and deserted place was a community of many families, but they were evicted by Lord Ventry c.1848, at the  height of the Great Famine, leaving ivy to grow profusely on the cluster of buildings, its thick roots clinging to the rough surfaces of the stone walls. Tall nettles bar doorways; holly, fuchsia, ferns, brambles, thistles, honeysuckle and foxgloves abound; butterflies and crickets enjoy the profusion. The hill behind the ruined houses is densely covered with holly; and hawks may sometimes be seen here against the backdrop of the mountains of Caherconree and Baurtregaum.

Killelton church is a small rectangular site consisting of an Oratory thought to date from the C7th and two smaller buildings, perhaps from the same period. During restoration in 1984 a holed stone similar to pivot stones at Gallarus oratory was found, indicating that this ruined shell of a building must once have been similar.

Derrymore (An Doire Mhór, the large oak wood) contains seven Ring Forts in various states of preservation, one with double banks and fosses, an extensive souterrain with several chambers, and ruins of stone Beehive Huts, very much overgrown with briars, gorse and trees.

Beenoskee from low tide at Derrymore Strand (Photo by © an Sionnach)

Derrymore Island is a privately owned bird sanctuary. The white top of the spit is an important high tide roosting area. The island also supports many rare plant communities, mainly of a salt marsh type.