Louisburgh (Cluain Cearbán), sometimes aka Kilgeever, (pop. 400) is situated on the Bunowen River in the townland of Clooncarrabaun near the southwest shore of Clew Bay. Originally a planned town, it retains many of its C18th features in style and scale. There re  couple of good pubs and several B&Bs in the area.

(Members of both the Browne and Howe families had participated in the 1758 Siege of Louisburg / Louisbourg, a French fortress on Cape Breton Island, Nova Scotia, after which the victorious British General Wolfe named the Louisburgh Grenadiers, who were involved in the capture of Quebec City and Montreal, but were disbanded at the end of the Seven Years War).

Thomas O’Malley Baines, born near Louisburgh in 1844, was evicted with his mother and sister from their holding as part of the famine clearances on the estate of the marquess of Sligo, and later became an active Fenian, vowing that he would never cut his hair until Ireland was free. Convicted of treason for spreading sedition in 1865, he was sentenced to ten years servitude in the penal colonies of Australia. After serving five years he was pardoned, and in 1872 he went to America with several compatriots. For many years he supported himself by selling books, one of which was an autobiography entitled My Life in Two Hemispheres. He died in California in 1899.

Louisburgh was reportedly the venue for a meeting in August 1939 between the fascistic General Eoin  O’Duffy, the German ambassador Eduard Hempel and IRA leaders to discuss matters of interest to the Nazi government in Berlin.

St Catherine’s church (CoI), built in 1798, was donated in 1991 to the Louisburgh Development Co. for conversion into a Folk & Famine Centre, with visual displays and informative panels on the many archaeological and historical sites in the area. Now known as The Granuaile Interpretive Centre, it focuses on the famous “Pirate Queen”, aka Grace O’ Malley,  through pictures, artefacts, replicas, videos etc.

St Patricks church (RC), completed in 1862, replaced an older edifice that stood on a site later occupied by Harney’s Garage, which retained a Holy Water font until its demolition in 1999.

(The parish of Kilgeever was also served over the years by churches at Doughmore (1816-1839) and Gawlaun (1839-1897), which became disused after large-scale eviction of tenants in these areas).

The Sisters of Mercy arrived c.1919 and built a secondary school, still in use today as Sancta Maria College.

Louisburgh’s Féile Chois Chuan, an annual traditional music festival held every May Bank Holiday Weekend, attracts a large number of enthusiasts from many parts of Ireland and abroad.

Part of the Bunowen River is a leading salmon fishery.

Louisburgh is renowned for its sandy Atlantic beaches,  noted for their pristine cleanliness. The dune-fringed strands at Carrowmore, Old Head and Doughmakeon are great places to stroll and admire beautiful sunsets.

Doughmakeon Strand is the site of  an 8ft high Standing Stone bearing a encircled Maltese Cross and an Ogham inscription (0 V I M A 0), now partially buried in the sand dunes, where prehistoric middens can also be found.

Grainne Uaile’s Castle is the popular name for an old O’Máille stronghold at Caher (on Killadoon road). Only the foundations and scattered stones now remain

Kilgeever Abbey is a ruined medieval church, believed to stand on the site of  much older  foundation associated with Saint Patrick, and was long a stopping point on the traditional annual pilgrimage to Caher Island. The rectangular shell features a C12th round-headed window, a C15th door with a pock-dressed arch and two aumbries (small niches used for storing vessels) in the walls. Two cross-slabs in the graveyard date from the C7th AD. A spring known locally as Tobar Rí an Dhomhnaigh (“the Well of the king of Sunday”) was the venue for a major “pattern” held every 15th July, the Festival of the 12 Apostles.  The abbey site still receives numerous visitors on Reek Sunday.

Tawnymackan Bog, a flat blanket bog that contrasts photogenically with Croagh Patrick, is a Natural Heritage Area, marked on most maps for no obvious reason.

Cregganbaun (An Creagán Bán) is a small rural village southwest of Croagh Patrick. Unusually, it has no church.

The Srahwee Wedge Tomb is regarded as one of the finest Bronze Age megaliths in Ireland. Dating from c. 2000 BC, it is about 5m long by 2m wide and consists of a single chamber topped by one large slab about 2m square. It is locally known as An Altoir, as it was used as an outdoor altar / Mass Rock during the Penal Law era, and bers a small carved primitive cross.  (Photo by Oliver Dixon)

Lough Nahaltora, locally aka Loch Altoir and long regarded as a sort of overgrown Holy Well, is remarkable for its ancient forest, with stumps of semi-fossilised prehistoric Scots pine trees still protruding from the brown waters. Dating from 2500 BC, these are amongst the best preserved remains of their kind in Europe.

In 2007 a company called Mayo’s Gold proposed opening a niche tourism gold mine in Cregganbaun, and an Interpretative Visitor Centre in Louisburgh. This re-ignited a 20 year -old controversy that first arose several mining companies attempted to open commercial quantity gold mines on the side of Croagh Patrick and in the Cregganbaun/Doolough region.

Emlagh townland claims to be the location of County Mayo’s first airstrip, a patch of ground used in 1942  for an emergency landing by a WWII fighter (presumably RAF).

The Doo Lough Valley is a bleakly magnificent chasm between the Sheeffry Hills and the Mweelrea Mountains,  uninhabited except for the intrepid sheep who seem quite content to have it to themselves.  Doo Lough (Dubh Loch – Dark Lake) is at the southern end of the valley and does look quite dark on the surface. The valley slopes comprise bogland covered with  grass that has a  reddish hue in sunlight. Many small waterfalls flow down both sides of the valley. (Photo by Richard Woodward)

On Friday 30th March 1849, the fifth year of the Great Famine, two Westport Poor Law Union Commissioners, Colonel Hogrove and Captain Primrose, were due to inspect  recipients of outdoor relief in Louisburgh to certify them as paupers, thus entitling them to a small ration of meal each. A large crowd assembled in Louisburgh but the officials failed to appear, having decided to visit people staying 11 miles away at Delphi Lodge instead.

The poor people gathered for inspection were instructed to appear at Delphi Lodge at 7am the following morning if they wished to continue receiving relief. Given their existing state of debilitation, this was an extremely daunting prospect, but nonetheless the destitute mendicants had little option but to undertake the long fatiguing overnight walk  along mountain roads and pathways in bitter cold and driving snow.

When the wretched supplicants finally reached Lord Sligo‘s fishing lodge his family was not in residence, the staff declined to open the gates, the Commissioners refused to meet their representatives, and despite their entreaties they were denied either food or tickets of admission to the workhouse; and so they began the weary, dispirited return journey.

A letter to The Mayo Constitution reported shortly afterwards that the bodies of seven people, including women and children, were subsequently discovered on the roadside between Delphi and Louisburgh overlooking the shores of Doolough lake, and that nine more never reached their homes. Locals maintain that of the 600 who set out on “the death march“, aka “the journey of horror“, some 400 died along the way, many of whom were buried where they fell. The Doolough Pass is the location of  memorial cross recalling the tragedy, also commemorated since 1988 by an annual Famine Walk from Louisburgh organised by Afri (Action from Ireland), a campaign group promoting world justice. The monument bears an inscription from Mahatma Gandhi: “How can men feel themselves honoured by the humiliation of their fellow beings?” (Photo – Gryphon Park)

Delphi, a  remote valley overlooked by Connacht’s highest mountain,  Mweelrea, is renowned for its stunning lake and river scenery. It was named by Howe Peter Browne, 2nd Marquess of Sligo, who had travelled extensively throughout Europe and the Mediterranean. Struck by this valley’s resemblance to the rather more arid classical beauty spot in Greece, which he had visited with Lord Byron, he called his new sporting estate after the home of the ancient oracle. (Photo) 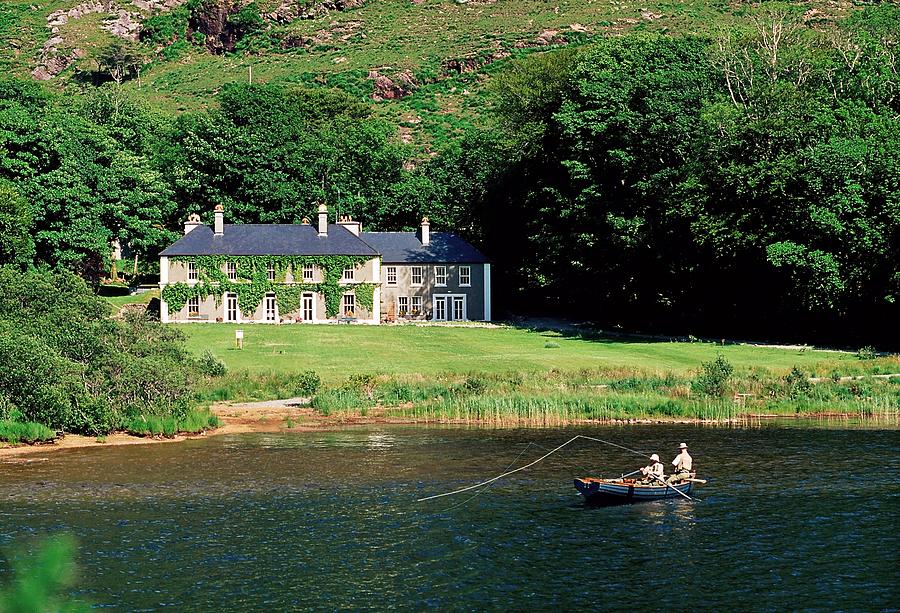 Delphi Lodge, erected c.1833 as a hunting, shooting and fishing for the Marquess of Sligo,  has long been famed for its superb salmon fishing on the Bundorragha River and Lake Fionnloch (“white/fair lake”).

The Lodge was opened to paying guests in the 1950s and run until his death in 1972 by the famously  idiosyncratic Trinity College academic Alec Wallace,  under whom it acquired an international reputation, both for its fishing and its house parties. Peter Mantle and his wife Jane bought the freehold estate and fishing rights refurbished the Lodge in 1988. Guests over the years have included Britain’s Prince Charles, actress Vanessa Redgrave and rock star Bryan Ferry.

Now managed by Michael Wade, Delphi is one of Ireland’s most famous sporting lodges, offering some of the best private fly-fishing for salmon in the country, and renowned for its good food (served at one huge table),  great wine cellar and wonderfully warm atmosphere. The House has a billiards room and an eclectic library, and is ideal for house parties and small weddings. There are also five charming rental cottages on the extraordinarily scenic 1,000-acre estate, where woodcock shoots are held in season.

On  18th May 2013 the gates of Delphi Lodge were opened to receive Afri‘s annual commemorative Famine Walk for the first time.

Delphi is not far from Leenane (Co. Galway) on ByRoute 1.