The Barony of Murrisk

The old barony of Murrisk, comprising the land between Killary Harbour and Clew Bay, is officially an Area of Outstanding Beauty, with a landscape dotted with lakes, bogs and forestry plantations, dominated by Croagh Patrick in the northeast,  the Sheeffry Hills in the south and the Mweelrea Mountains in the southwest, where much of the coast is inaccessible by road. 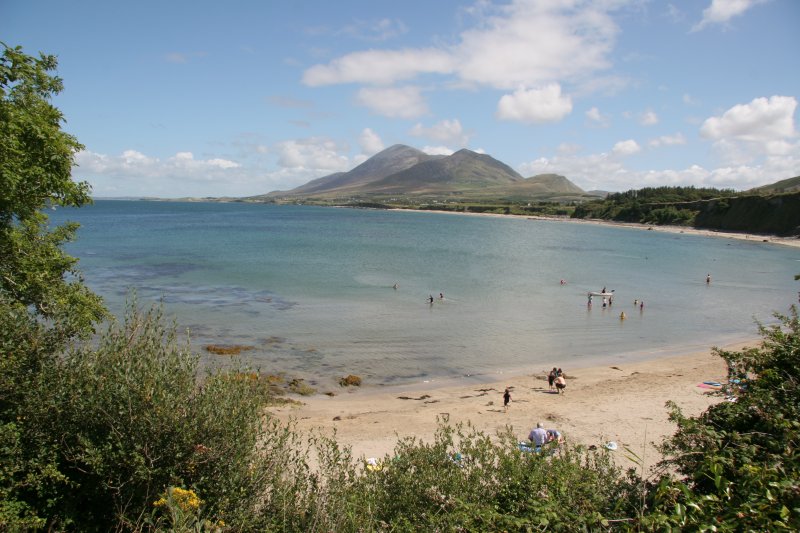 Croagh Patrick (764m  2,407ft), “the Sinai of Ireland”, is the third highest mountain in County Mayo after Mweelrea and Nephin. It forms the southern part of a U-shaped valley created by a glacier flowing into Clew Bay in the last Ice Age, and is part of a longer east-west ridge of which the westernmost peak is called Ben Gorm. (Photo – syque.com)

The mountain’s name derives from Cruach Phádraig – “(Saint) Patrick’s stack”. It is known locally as “the Reek”, a Hiberno-English word for a “rick” or “stack”, and is also sometimes called “the Rock”. In ancient times it was known as Cruachán Aigle;cruachán is  a diminutive of cruach, and may also have some connection with Crom Cruach, a Celtic deity reputedly propitiated with humam sacrifice, while Aigle is either a version of the Latin loan aquila – “eagle” (more usually aicile or acaile) or a person’s name.

Saint Patrick is said to have spent Lent in 441 AD fasting on the summit for 40 days and nights while beset by hosts of demonic birds, and to have built a church on the same spot. Legend has it that at the end he threw a silver bell down the side of the mountain, knocking the she-demon Corra from the sky and banishing all the snakes from Ireland.

“Reek Sunday“, the last Sunday in July every year, sees thousands of  pilgrims climb the mountain with a view to reducing Purgatorial sentences.

Although traditionally inspired by devotion to Saint Patrick, there is evidence to suggest that the summit has been a site of pilgrimage since long before the arrival of Christianity, especially at the summer solstice and the Lughnasa festival, in honour of the great Celtic sun god Lugh.

A 2006 survey found that of approximately 15,000 Reek Sunday pilgrims that year (fewer than in previous years), 10,000 were male and 3,500 were first-time climbers. Participants came from Ireland, Britain, Scandinavia, Germany, the Netherlands, Italy, Hungary, Latvia, India, Australia, Brazil and North America.

While barefoot trekking is now discouraged, many Reek Sunday pilgrims climb Croagh Patrick barefoot (and sometimes shirtless). Hypothermia is a concern for many climbers, especially if the weather is bad. As a result, the trip can be dangerous and, while deaths are infrequent, there have been recorded incidents where people have been badly injured during the climb because of the steep scree slope to the summit and the poor footing.

Emergency medical and rescue cover is provided on Reek Sunday and during the summer by various organisations, with Irish Air Corps helicopter support for casualty evacuations to hospital.

The ascent of Croagh Patrick, not overcrowded most days of the year, can be launched from various points around the mountain, but is particularly known for the tough scree near the summit, and should only be attempted by able-bodied hikers ready for a gruelling trek of two to three hours. (Photo – www.philipcoppens.com, with an interesting article on the ancient significance of  the mountain)

Rumours have long abounded of  buried treasures beneath the summit, including one preposterous story about the Elders of Zion choosing the location to hide ill-gotten Jewish hoards. A seam of gold was discovered in the mountain in the 1980s, but Mayo County Council elected not to allow mining, deciding that the precious metal was “fine where it was“.

A 1994 archaeological excavation showed that Croagh Patrick was a place of tremendous importance in the pre-Christian era, as indicated by the discovery of a Celtic hill fort encircling the summit of the mountain. Also revealed were the remains of a dry stone oratory radiocarbon dated to between 430 and 890 AD.

St Patrick’s Oratory was built on the summit in 1905. Mass is said on Reek Sunday and on 15th August. Since its 2005 centenary the chapel has been open to visitors every day during the summer. (Photo – www.philipcoppens.com)

The statue of Saint Patrick at the start of the traditional Pilgrims Path was erected in 1928. It depicts the saint dressed in episcopal garments, holding up a shamrock to illustrate the idea of the Holy Trinity.

The Croagh Patrick Visitor  Information Centre / Teach na Miasa (098 64 114) is situated in Murrisk on the Pilgrims’ Path at the base of the mountain.

Murrisk (p0p. 240) lies between the shores of Clew Bay and the foot of Croagh Patrick. The name comes from either Muir Riasc – “marsh by the sea” – or Muir Iasc, a sea monster worshipped in pre-Christian times.

The Annagh – Killadangan archaeological complex at Gortbraud is a marshy field scattered with Standing Stones of various heights – one picturesquely surrounded by water. The extent of this megalithic grouping suggests a major ceremonial site, probably dating from the Bronze Age. In addition to remnants of a double stone circle and a large oval enclosure, an alignment of 4 stones increases in height from north to south, drawing the eye up to a niche in the eastern shoulder of Croagh Patrick, into which, at around noon on the day of the winter solstice (21st December), the sun appears to dip, directly in line with the row of stones, before disappearing shortly afterwards behind the mountain.

Murrisk Abbey was founded as an Augustinian Friary in 1457 by Lady Maeve Ní Chonchubhair, wife of Lord Dermott O’Malley and mother of Tadhg O’Malley. The local chieftain Thady O’Malley (probable grandfather of Grace O’Malley) gave the Abbey to Father Hugh O’Malley of Corpus Christi, who had got permission in a letter from Pope Callistus III because “the inhabitants of those parts have not hitherto been instructed in their faith.” It quickly became the preferred starting point for pilgrimages up Croagh Patrick.

The friars were driven out in 1578, when their property was granted to James Garvey, but  they may have returned, as there is mention of the friary in an inquisition of 1605.

The ruins, just to the seaward side of the village, comprise the long and narrow church, the sacristy and the chapter room with overhead dormitory. There is a beautiful east window with carved human heads on the wall outside. The south wall is crowned with crenellations and features a number of trefoil and ogee-headed windows.

Murrisk  is still the most popular starting-point for pilgrims who visit Croagh Patrick on Reek Sunday, when thousands of people converge on the village. Before the C15th, pilgrims approached the mountain from An Tóchar Phádraig, a path starting at Aughagower.

Murrisk native Matt Loughrey set out on 5 June 2010 to make 365 consecutive ascents of Croagh Patrick to raise money for charity.

The National Famine Memorial, designed by John Behan to evoke a “coffin ship” with skeletal passengers, was unveiled in July 1997 by President Mary Robinson. A sister monument was unveiled in front of the UN building in New York in 2001. Western Mayo suffered particularly badly during the Great Famine.

Bertra Beach, a long sandy strand beside the village, has been awarded the EU Blue Flag.

Lecanvey (Leac an Anfa– “Slab of the Storm”) is a seaside village with a community centre and two good pubs, overlooked by Croagh Patrick.

The Emancipation Cross at Lecanvey was one of many erected round Ireland to celebrate the passing by the UK Parliament of the Catholic Emancipation Act 1829.

St Patrick’s church (RC), built in 1891 to replace a simple thatched structure that stood on a small strip of land leased from Lord Sligo, is  hndsome edifice in  superbly picturesque setting.

Lecanvey Pier is adjacent to a small beach. Lough na Corra / Nacorra, southwest of Croagh Patrick, is named for the she-demon vanquished by Saint Patrick. Surrounded by blanket bogs, it is a popular trout fishing venue, and was the location of a 1911 sighting of several mysterious black creatures said to be “larger than horses“. (Photo taken from Croagh Patrick by Paul McIlroy)

Drummin (An Dromainn – “The Ridge”) (pop 200) is a small village south of  Croagh Patrick, set in a scenic rural district known for its hills, criss-crossed by winding, leafy lanes festooned with honeysuckle and wild roses in season and commanding lovely views of Clew Bay.

Brackloon Wood is one of the last remaining areas of native Atlantic oakwood in Ireland. Many stories about caves, hidden treasure and ancient monuments are told about the wood. King Conor MacNeasa and the Red Branch Knights are reputed to have ridden along the secluded road winding its way through the hills to the coast.

Lough Lugacolliwee is  spectacularly isolated lake high in the barren Sheeffry Hills, accessible to walkers on the Western Way. (Photo)

Tawnyard (Tamhnaigh Ard – ‘high field or isolated arable area’) (436m) is a summit  located deep in the Sheeffry Hills. There are several peaks in Mayo whose names begin with Tawny-, derived from tamhnach, the original meaning of which seems to be a clearing. It comes to mean ‘field’ and in upland areas it often has the meaning of an arable area amongst rough upland pasture. This hill is named Sheffry Hill on William Bald‘s Map of County Mayo (1830). 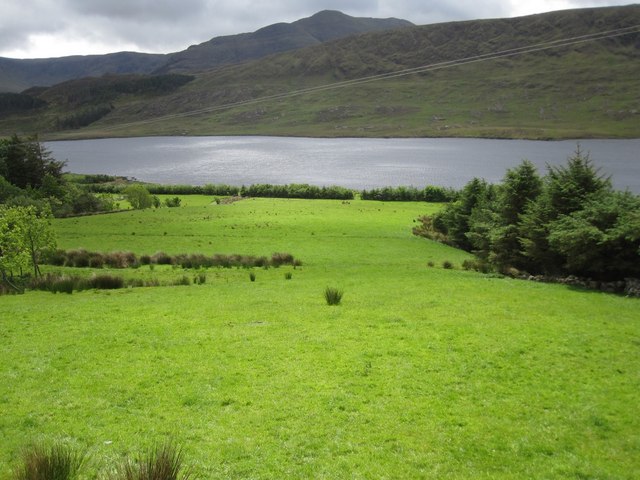 Tawnyard / Sheeffry Woods is used primarily a trail head for the Western Way that crosses the forest and the Owenduff River, one of the west of Ireland’s premier fishing rivers. The forest car park is a good place to have a pleasant picnic and enjoy the view.

Tawnyard Woods is linked by road to the Doo Lough Pass.