Clew Bay (Cuan Mó) is a natural Atlantic ocean bay overlooked by Croagh Patrick and the mountains of North Mayo.

Clare Island guards the entrance of the bay, while the eastern end contains Ireland’s best example of sunken and semi-submerged drumlins, giving rise to the quaint but false tradition that there is an island for every day of the year.

From the southwest part of the bay eastwards are Louisburgh, Lecanvey, Murrisk, and Westport; north of Westport is Newport, and westwards from there lies Mulranny, gateway to Achill. From the south side of the bay, between Clare Island and Achill, Bills Rocks can be seen.

Clew Bay has always been a far-flung part of Ireland, at the end of dwindling roads, and accessed only by the wild Atlantic seas of the west coast. This made it home to only the bravest seafarers.

Clew Bay was the focus of the O’Malley family possessions in the Middle Ages, and is associated especially with the redoubtable “Pirate Queen” Gráinne Ui Mhaille / O’Malley / Grainnuaile / Granny Wales.

Westport and Newport were once important trading ports, with the outer islands acting as transfer points for goods to move between the ocean-going ships and the “‘lighters”, which could navigate the bay’s rocky waters into the havens.

The Clew Bay Drowning Tragedy of 1894 saw 32 people from Achill Island lose their lives. They were aboard a boat which had sailed from Darby’s Point on Sunday 14th June to meet a steamer near Westport Quay, which was due to take them to Scotland for the potato picking (“tattie hoking“) season. Over the years, it was the custom for the young islanders to make this trip. They would spend up to six months in Scotland, returning in November. Many had made the trip before, but for some it was their first time.

As they progressed into Clew Bay, an emigrant ship crossed their path and they all rushed to one side of the boat to wave to those leaving for a new life in America. The skipper shouted a warning, but it was too late: the boat keeled over, throwing the occupants into the water. Only a couple made it ashore. Conditions were such that witnesses on the mainland could only look on in horror.

During the Civil War , 400 Free State troops were landed in a naval operation at Clew Bay in July 1922 to take Westport and Castlebar from Anti-Treaty forces.

The bay is a major international competition venue renowned for common skate fishing (it holds the Irish record for a 160 lb white skate) plus  tope, huss and ray.

In recent years there has been controversy over fish-farming in the bay.

Rosmoney Harbour has become a magnet for tourists wishing to sample yachting and deep-sea angling. Others have come for the complementary health treatments at the new Rosmoney Spa which overlooks the bay.

The Islands of Clew Ba

Legend has it that, in addition to  Clare Island at its mouth, Clew Bay has 365 islands in it—”an island for every day of the year”. In fact there are only 117. 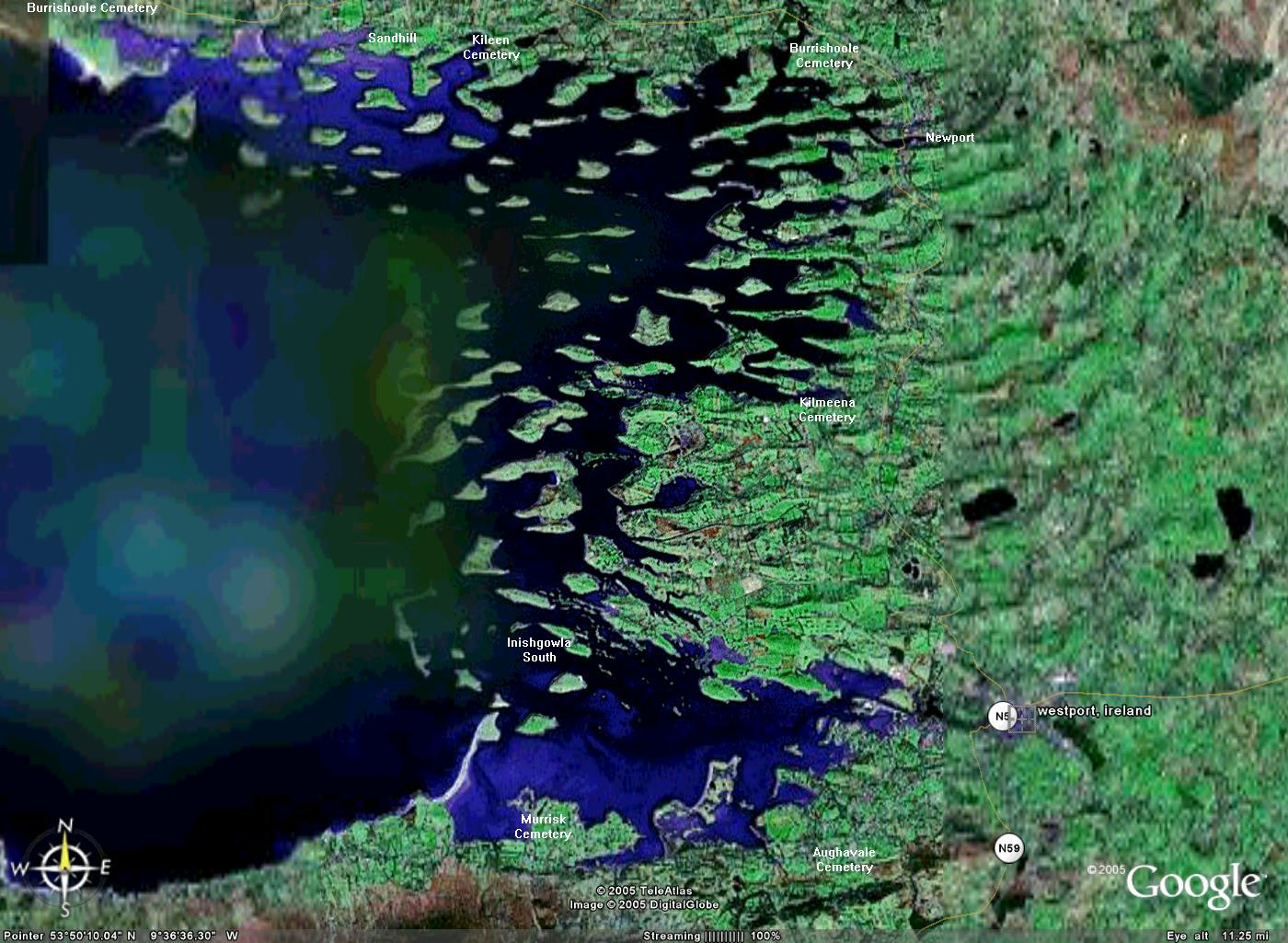 Most of Clew Bay’s  “islands” comprise  a series of semi-submerged drumlins, sandbars, and rocks in the eastern half of the bay, listed in a Wikepedia chart with reference to their relative positions.

Quite a few of the islands were populated until at least the mid-C19th, and about ten of them still have human residents. Seals can occasionally be seen dozing on their rocky shorelines.

Dorinish, comprising two small islands (Doronish Mór and Doronish Beg) joined by a natural stone causeway, has colloquially been known as Beatle Island since the Beatles‘ main singer-songwriter John Lennon purchased it the for £1,700 1n 1967. Previously used by sailing ships for its stones, the island was intended by Lennon as a place of peace for himself and his family, but domestic harmony proved elusive and he soon divorceed his wife Cynthia to live with his muse Yoko Ono.

The island went unused until Lennon invited “King of the Hippies” Sid Rawle to use the island in 1970. For the next two years, a group of proto-communards known as the Diggers called Dorinish home.  Post would arrive addressed to Hippie Island, Ireland. 25 adults and one baby to live in tents and grow vegetables with little protection from the lashing storms that swept in from the Atlantic. Remembering the two years, he said: “It was heaven and it was hell.”

Some of the local people were hostile to the newcomers. “Hippie republic under siege” was the headline in the Connaught Telegraph in March 1971 over a story, which said: “After a year of seething anger, Westport has finally declared war on the ‘Republic of Dorinish’”.

In 1972, after a fire destroyed the main tent used to store supplies, the commune disbanded. (Rawle went back to Britain, and was one of the founders of the Glastonbury Festival and the Tipi Valley commune in Wales, where 150 people lived for 20 years, before he eventually settled in the Forest of Deane, where he died in 2010).

After Lennon’s death in 1980, Yoko Ono sold the island for nearly $50,000 and donated the proceeds to an Irish orphanage.

Dorinish is now used as a grazing site for livestock and is sometimes visited by enthusiastic Beatles fans.

Collanmore Island is home to a branch of Les Glénans, a non-profit sailing school founded  in Brittany in 1947 by former members of the French Resistance during WWII. The base teaches dinghy and catamaran sailing and sail-boarding. Collanmore enjoys magnificent views of Croagh Patrick and the bay. It is accessed by boat from Rosmoney pier.

Inishturk Beg (“small island of the wild boar”) is the highest and one of the largest islands in Clew Bay.

Inishturk Beg used to be home to a large number of families, with a village building up around the pier on the south shore. Agriculture was a mainstay occupation, but the islanders were best known as  boat-builders who produced vessels uniquely configured for the big seas of the bay.

View of Croagh Patrick from the Main House.

Inish turk Beg is currently for sale at an asking price of €4m.

Clynish Island, home to several generations of the Gavin family, had a splendid new pier installed in 20o3.

From the shore, the island looks unremarkable: a sheep-speckled hillock, a couple of ruins and a cluster of houses, accessed by a rickety pier, handmade from fish farm salmon cages. There are no roads. Although not far from the mainland, very few modern visitors ever set foot on it.

C19th sea merchants dropped cargo on Inishlyre, as there was no deep-sea harbour in Westport, and the islanders then shipped the goods to the mainland on their currachs. There were two pubs on the island. In 1841, before the Great Famine, the census reports a population of 113.

The two-mile journey from Rosmoney Harbour to the island takes half an hour by boat when the sea is calm, the fishing trawler is tossed about a bit.  In bad weather “waves come right over the bow. It can be frightening.”