Westport House, considered one of Ireland’s most beautiful stately homes, was built and is still privately owned by the Browne family, whose principal titles are Earl of Altamont and Marquess of Sligo. (Photo – www.toursligomayo.com)

In 1730 young John Browne, the future 1st Earl of Altamont, commissioned Richard Cassels to design a a magnificent new residence laid out around the core of the earlier Ó Máille Tower House (part of which, now called the Dungeons, can still be seen).  The present east façade dates from this time.

Westport village, then situated somewhere around what is now the front (East) lawn, was moved to its present location c.1770.

At Westport House he had the lake dug (the river had previously lapped against the outside walls) and  employed James Wyatt to extend and complete the building. The beautiful Gallery and Dining Room are considered the English architect’s finest work. Most of the mansion visible today was constructed at this time.

In 1795, together with his brother Denis Browne (1763- 1828), who had a well-earned reputation as a fearsome duelist, the Earl assisted over 500 Ulster families who fled to Mayo in the wake of disturbances arising from the Battle of the Diamond. After careful interrogation to root out any disaffected elements, the refugees were settled on the family estates, mainly in and around the new settlement of Louisburgh.

Although both John and Denis supported Catholic Emancipation, they kept Dublin Castle well informed of events in Mayo leading up to the 1798 Rebellion. The French invasion saw Westport House occupied by General Humbert‘s troops (who left several artefacts); in the aftermath, the younger Browne, whose own home in Claremorris had been destroyed by rebels, acquired the nickname Denis the Rope for his zeal in hanging suspected insurgents. As MP for Mayo since 1782, Denis voted for  the Act of Union 1800, but unlike his elder brother, who was made 1st Marquess of Sligo, failed to gain a peerage. As a Westminster MP representing Mayo (1800–1818) and Kilkenny (1820–26) he continued to favour Catholic Emancipation but strongly supported military coercion in Ireland.

Howe Peter Browne, 2nd Marquess of Sligo, a typical  regency buck, inherited in 1809 at the age of 21. A friend of the Prince Regent, Samuel Taylor Coleridge and Lord Byron, he owned race horses, including the 1809 Derby winner Sligo Waxy (famously painted by Henry Chalon), and travelled extensively throughout Europe. Having excavated the 3,000 year old columns of the Treasury of Atreus at Mycenae, he “borrowed” some seamen from a British warship to bring them back to Westport, for which he was subsequently sentenced to four months in Newgate Prison. He married Lady Hester Catherine de Burgh, the 13th & 1st Earl of Clanrickard‘s daughter, with whom he fathered 14 children. At Westport House, he added the north and south wings and the library (designed by Benjamin Dean Wyatt).

In 1834 he was appointed Governor General of Jamaica, with the difficult task of overseeing the period prior to the full emancipation of the slaves. He met with great opposition from plantation owners and other vested interests. He was the first landowner to liberate the slaves on the family’s Jamaican plantations. The first ‘free village’ on the island, Sligoville, was subsequently named in his honour. 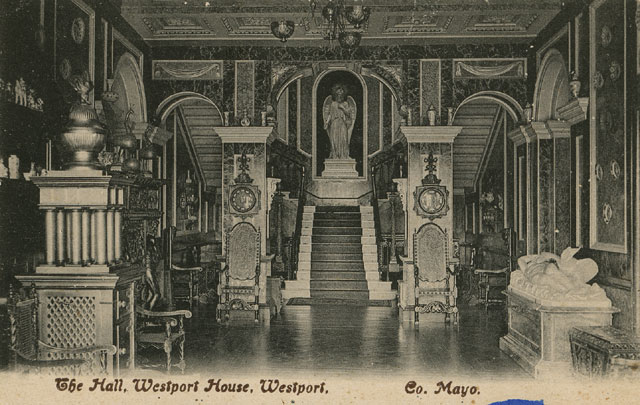 Image from www.maggieblanck.com, a site contrasting the wealth of the “haves” with the poverty of the “have nots” in C19th Ireland, with vivid contemporary illustrations of peasants’ cottages, mud huts etc.

George Browne, 3rd Marquess of Sligo, who inherited the Westport estate in the first year of the Great Famine, moved with two of his sisters into a smaller house in the town and is reported to have spent 50,000 pounds to alleviate the suffering of his tenants,  importing cargoes of meal, subsidising the local workhouse, and writing tirelessly to the government to demand more measures to help the poor.

(However, the same Lord Sligo is stated in JF Quinn‘s 1996 History of Mayo to have “cleared the whole countryside along Clew Bay so as to furnish his brother-in-law Mr. Wilbraham with ample lands, and from his house at Old Head this relative could look around on the ruins of many a village, and except for his family and his servants, he was alone“).

The 3rd, 4th and 5th Marquesses, as cousins and siblings, were not far apart in age, and lived through times of great changes in land ownership law in Ireland before their deaths (in 1896, 1903 and 1913 respectively). The 6th Marquess (and 4th Earl of Clanricarde) saw the birth of an independent country, and took his seat in the short-lived 1921 Senate of Southern Ireland. He died in 1935, and his son, the 7th Marquess, died 6 years later.

The 1951 funeral of Col. Arthur Howe Browne, 8th Marquess of Sligo KBE (8 May 1867 – 28 May 1951), was described by his nephew: “… his coffin, draped in a Union Jack, was carried though the gates into Westport town. The chief undertaker, a respected local builder, had been a general in the Old IRA. No one thought the flag sinister or a joke in poor taste. Indeed it was hardly remarked upon. The Eighth Marquess believed in God, the British Empire and Westport in that order … and for him there was nothing incongruous about the trio.” His brother, the 9th Marquess, died the following year.

Denis Edward Browne, 10th Marquess of Sligo (d.1991) and his wife Jose (née Gauche) opened Westport House to the public in 1960. Their son, Jeremy Ulick Browne, the current Lord Sligo, together with his wife Jennifer and their five daughters, have worked very hard to make the property one of the most important tourist attractions in the West of Ireland, with over 4 million visitors from all over the world to date.

The mansion, the only stately home in County Mayo, is situated in an impressive parkland setting with a lake, waterfalls, gardens and terraces commanding splendid views of Croagh Patrick, Clew Bay,  Clare Island, Achill Island and the Atlantic Ocean.

The ruins of the first Holy Trinity parish church (CoI), erected in 1797, and a bronze statue of Grainne Ní Mháille by Michael Cooper stand in the grounds of Westport House.

The Pirate Queen’s 14th great granddaughter Sheelyn Browne has promoted the grounds as a festival venue and re-established the House’s link to Westport town’s core with fine new gates installed at Church Lane.

Westport Quay, reached by a road running beside the old stone wall of the Westport House estate and by the Greenway walking route along the former railway track, is nowadays effectively a seaside leisure resort, notable for its many pubs, restaurants and warehouse conversions (mainly hotels and holiday homes). (Photo – Carlton Atlantic Hotel)

Established in 1780 and extended  c.1837, the harbour was long the home of a herring fishing fleet and the nucleus of a busy commercial port, exporting corn around the British Isles and importing timber from North America. Although no longer used for shipping, it remains popular with boating, sailing and water sports enthusiasts.

The Clew Bay Drowning Tragedy Memorial on the Quay recalls the 32 young Achill Islanders killed in the 1894 disaster when their boat overturned on their way to  meet the steamer that was to take them to Scotland for potato picking jobs (“tatie hoking“).

Rosbeg, just beyond Westport Quay, is the location of the excellent Shebeen bar / restaurant, which we can recommend personally.

The Sea Angling Festival, an internationally acclaimed event that has been held annually for over 42 years, is held  in the third or fourth week in June.

The World – Gael Force West, held every August is the largest one day adventure multi-sport race of its kind in Europe.

The Westport Horse & Pony Show is held on the first weekend in June.

The Westport Music Festival has been revived in recent years. This five day event is now run annually in late July / early August at the Fairgreen, starring performers such as the Drifters, De Danaan, Philomena Begley, Aslan, the Saw Doctors and The Beatlez.

The Westport Festival of Music & Performing Arts was held for the first time in the grounds of Westport House in late June 2012. Among the 55 acts were Ray Davies, The Waterboys,  Alison Moyet, Nick Lowe, The Dubliners, Mundy, Hothouse Flowers, Damien Dempsey, Lloyd Cole and Jools Holland.

The Westport Arts Festival is held in the first week of October.

The Westport Seafood Festival is held on the October Bank Holiday weekend.

The Westport Wellness Week Festival was last held in February 2009.

The “chief” displays the old “stone fort of beeves “, while the field is divided by St Patrick’s Cross, the principal emblem of Ireland, in this case symbolising the C5th visit of Saint Patrick to the locality.

The ship represents Westport’s maritime history and also refers  of the town to the O’Malley clan, on whose territory the town stands on.

The scallop (a  symbol dating from the medieval origins of the Camino de Santiago, stretching across France and Spain to the supposed burial place of the apostle James in Galicia) represents a place of pilgrimage, in this case Croagh Patrick.

The eagle, the heraldic crest of the Browne founders of the modern town in 1760, can also be taken to refer to one interpretation of the mountain’s ancient name of Cruachan Aigle.

Westport is currently spared the worst effects of the ongoing recession thanks in large part to Allergan, a multinational company that employs some 1000 locals in the manufacture of Botox for therapeutic and cosmetic purposes.

An Irish Times competition in June 2012 named Westport the Best Place to Live in Ireland. “The judges chose Westport because it is a community of people working together to make the best of the town’s many advantages.” Several thriving sports clubs include the soccer team, which won the Connacht Cup recently, and a “brilliant” youth-activities club that attracts 500 primary-school children. Not to mention the skate park, multi-purpose games area and open-air gym for older people, funded with seed money from Tidy Towns cash prizes. The Tidy Towns phenomenon that infiltrates every Westport pore, along with the town’s startling 97 voluntary organisations  “each working hand in glove, creating fantastic facilities for its young and even providing a colour service for local business frontages.” The judges noted that “The town has solved the most consistent problem facing nearly every community, getting people to work together.”