lnishbofin / Inishboffin / Bofin / Boffin Island (Inis Bó Finne – “Island of the White Cow”) (winter pop. 200), located about 8km / 5mi off the northwestern coast of Connemara in County Galway, is the largest and most accessible island of a small archipelago which also includes Inishark. 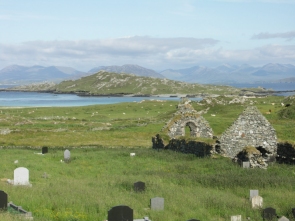 Inishbofin is tiny: 5.5km / 3½mi long and 3km / 2mi wide. The highest point (90m) is Cnoc Mór (“Big Hill”). The few roads are ideal for quiet cycling or walking, and cross-country diversions on foot are worth taking to admire the neighbouring islets and coastal views of Connemara and County Mayo, stretching northwards in myriad shades of green, grey and blue to Croagh Patrick.

The island has impressive cliffs, rock outcrops, sea stacks (The Stags), sea caves and arches and a splendid blowhole (Poll Tolladh). There are several rocky / stony / shingle / sandy strands; the best for swimming are the broad horseshoe beach in Rusheen Bay and the nameless one in the southeast corner of the island, while Trá Ghael, overlooked by Cnoc Mór, is beautiful but dangerous.

There are also lakes and ponds, notably Church Lake, with reedbeds providing cover, food and nest sites for a wide variety of birds, including swans, and Lough Bó Finne (“the Lake of the White Cow”, connected with various versions of a legend involving an old woman and a pale bovine, usually turned to stone, who nevertheless still emerge from the depths every seven years and / or to warn of impending disasters).

Because of the traditional methods of farming practised on the island, animals and birds under threat in other parts of the country still flourish here. The rarest species present are the Corncrakes, which have been nesting and breeding here for many years. Other seabirds abound, and there seem to be an unusually large number of choughs.

The waters around the island are remarkably clear and unpolluted. Dolphins visit regularly, and basking sharks are not unusual.  Seals come up onto the rocks and beaches to sunbathe and play.

The island is divided into five areas: West Quarter, Fawnmore, Middle Quarter, Cloonamore and Knock. There are hardly any cars, and only a few minivans, but bicycles are available for hire. Most social and commercial activity takes place near the pier, which recently underwent a €2m renovation. Despite a violent and tragic past, and winter storms of satanic virulence, the island has long had a reputation as a friendly and hospitable place to enjoy peace and tranquillity. This is still the case today, but perhaps not for very much longer.

There is almost a surfeit of accommodation on Inishbofin, with no less than three hotels, one quite upmarket, a hostel, B&B and self-catering facilities, a good restaurant and a chipper. There are no police, so the bars need suffer no silly worries about closing time, and excellent traditional musicians frequently keep crowds dancing into the wee hours. The island is particularly popular with visiting artists, sea-anglers and divers.

This remote island has been inhabited continuously for several thousand years. The widespread distribution of ancient stone terraces, dwelling sites and fulachta fiadha (cooking sites) indicate a huge expansion of population during the late Bronze Age which may have led to marginal areas being taken in to cultivation. This in turn may have resulted in the exhaustion and abandonment of the island’s more fragile soils, and subsequent envelopment in peat bog – now springy turf, still traditionally cut and dried and used as fuel, making for pleasantly scented fires. Any wood that existed was cut down and used as heating fuel many centuries ago. Because of the salt-enriched air, trees were never able to re-establish themselves, so the island is totally tree-free.

The remains of no less than four Promontory Forts can be found on Inishbofin; they are thought to date from sometime between the Iron Age and the early Christian era. Dun na h-Inine and Dun Dubh are of archaeological interest.  Dun Mór in West Quarter is the most dramatic. Dun Graine is supposed to have been used by the Elizabethan era pirate Graine Uaile / Grace O’Malley of Clare Island fame, who is said to have collaborated with a Spanish colleague called Don Bosco in luring merchant ships into the harbour to be pillaged at leisure.

The patron of Inishbofin is Saint Coleman, who arrived with a group of Irish and English monks from Lindisfarne to found a monastery on the island in 665 AD. Tensions between Irish and English led the Saint to remove the latter to another new mainland monastery known as Mayo Abbey. The Inishbofin monastery is believed to have lasted into the C10th. Some remains can still be identified in the form of early crosses, a spectacular Bullaun Stone and at least one of two Holy Wells (the other is obscurely dedicated to Saint Flannan, who was buried at Killaloe in 640 AD). The site is now mainly occupied by the Knock community graveyard.

The roofless C13th chapel in the same cemetery, popularly believed to have been one of the edifices “visited” (pillaged and burned) in 1334 by Lord Deputy Sir John Darcy, was used as a place of worship until the early C19th.

In the mid- 17th Wars of the Three Kingdoms, Inishbofin was one of the last Royalist outposts. With aid from the Duke of Lorraine, a last ditch campaign of resistance had some initial success, including the retaking of the Aran Islands, but all the western islands finally surrendered to Cromwell‘s army.

In 1653 Rory O’More, chieftain of Leix, was exiled to Inishbofin; he disguised himself as a fisherman to escape, only to die shortly afterwards. “Cromwell’s Barracks” is the name locals give to the sinister star fort dominating the Harbour. Built c.1655, it was used as a staging post for convicts being transported to the West Indies, and to incarcerate Roman Catholic clergy, for whom Inishbofin was effectively a penal colony; one unfortunate prelate was tied to “Bishop’s Rock” at low tide and drowned as the waters rose.

In the C18th the islands, then owned by the Marquess of Clanrickard, entered a period of benign neglect, and the islanders revived the age-old practices of ship wrecking and smuggling. A surviving warrant of 1741 gives a fascinating description of the wrecking of the Kitty Briggs, homewards bound with a rich cargo from Antigua, attacked in Inishbofin harbour by three O’Flaherty brothers, one a priest!

In the C19th the islanders lived from fishing, especially for basking sharks, and hunting seals, and the population reached over 1600. By the 1830s the islands belonged to the Marquess of Sligo. Irish was still spoken, but was gradually replaced by English by the turn of the century.

Although the islands escaped the initial devastation of the Great Famine, they also took much longer to recover, and were held up as the epitome of poverty in the 1870s, when the fishing industry began to recover, but government relief measures remained in operation until 1897 and emigration continued to deplete the community well into the second half of the C20th.

The Children’s Burial Ground in West Quarter was used up to 100 years ago and was mostly utilised for burying infants who were not baptised before death. A slight trace of a monastic site can still be identified nearby.

Inishbofin Heritage Museum has many interesting items on display, such as the contents of a traditional cottage, old farming and fishing implements, old photographs and writings, accounts of local tragedies such as drownings and famine – and much more. St Coleman’s church (RC) – Interior. (Photo by murtphillips). The parish of Inishbofin (both Civil and Roman Catholic) has long been regarded as a constituent part of Connemara.

Mid-C20th life on Inishbofin was chronicled in a book called The Island of the White Cow, written in 1985 by Deborah Tall, who lived on the island for 5 years in the early 1970s.

Inishbofin through Time and Tide, a chronicle of the island written by local people, is the most comprehensive study of Inishbofin to date.

lnishbofin can be reached by ferry from Cleggan in northwestern County Galway. The island  also has a helipad, and an airstrip is planned.