Corr na Móna (“round hill of the bog”) (pop. 850), anglicised as  Cornamona, is a Gaeltacht village much visited by anglers and walkers, scenically situated on the northern shore of Lough Corrib and overlooked by Binn Shléibhe / Mount Gable.

The Dubhros / Dooros  peninsula, jutting southwards into Lough Corrib, is famed for its wild flowers, and can be explored by the single road along its length, leading to the island of Inisdoorus, which is accessible by a bridge.

The Dooghta valley is the location of a Holy Well near the top of a circular route that makes for an enjoyable ramble.

The Seanbóthar (“old road”), officially known as the Siúlóid Bhinn Shléibhe, linking the village with An Fháirche / Clonbur, is only partially paved and is  generally regarded as an ‘easy’ 10km walk with a steep climb at each end.  the local shop, Lowrys. 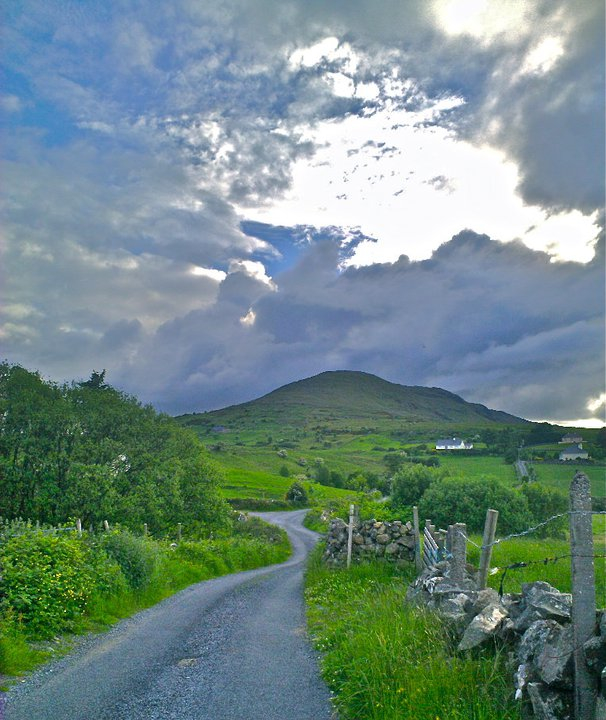 Mount Gable/ Ben Levy / Binn Shleibhe (“peak of the moorland”) (416m / 1370 ft) dominates the isthmus between Lough Corrib and Lough Mask and guards one of the major routes into Connemara from the east.  This is is where, according to legend, the Firbolg hordes assembled before their epic confrontation with the Tuatha Dé Danann at the Battle of Moytura.  The summit, accessible by an exceptionally scenic disused turf trail, commands spectacular views of the lakes and surrounding landscapes. (Photo taken byLizzi from Gortnurup House, a splendid old farmhouse available for holiday rental)

The Gap of Danger was where the “plainsmen” of Mayo met the “wild” men of Joyce Country.

Lough Coolin, located at the foot of Mount Gable, is accessible via Ballyveane. Beside the lake are the atmospheric ruins of an old village, said to have been abandoned during the Great Famine. Long a favourite picnic spot for parties of Guinness family members and guests staying at Ashford Castle,  the lake was renowned for white trout until the early 1960s when  a local fisherman introduced pike, now the only fish in the lake apart from perch. A stream from Lough Coolin flows into Lough Mask

An Fhairche / Clonbur, scenically situated between Lough Corrib and Lough Mask, at the eastern end of Joyce Country, is a Gaeltacht village with several elegant stone buildings and traditional shopfronts in Irish and English.

An Fhairche / Clonbur is just south of Clonbur Woods and Ballykine Castle on the western outskirts of Cong (Co. Mayo)

Ross Hill Abbey, situated on the southern shore of Lough Mask, is a curious complex of ruins and graves surrounded by an ancient oval enclosure known as a caiseal / cashel. Long used as a parish church and graveyard, Teampall Brendain is said to have been founded in the C6th AD by Saint Brendan the Navigator. The western end of the ruin is undoubtedly of early Christian origin, and may have replaced a wooden structure. A cross-inscribed pillar and a graveslab also date from the Early Christian period. A 1990 archaeological dig unearthed parts of a medieval limestone baptismal font and a considerable quantity of late C19th and early C20th clay pipes. Nearby is a curiosity locally known as The Ogham Stone. The Ross Hill estate, once the property of the unpopular Earl of Leitrim, was later acquired by the Guinness family.

Petersburgh House, now in ruins, was built in 1715 by Peter Lynch, one of whose descendants, John Lynch, was a signatory of the American Declaration of Independence. Beautifully located on the forested shore of Lough Mask, the estate (including the 18-acre Red Island), was allowed to deteriorate for many years before being converted into an outdoor education and leisure facility in 1986. The Petersburg Activity Centre specialises in adventure sports such as rafting, canoeing, orienteering, caving / potholing etc.

Cloch Bhreac / Cloghbrack (“speckled stone”), a tiny village north of Mount Gable, was formerly the property of the Earl of Leitrim, and is close to a townland called America.

Finney / Finny is the the start / end of several looped walking routes in the Partry Mountains, takiing in Lough Nafooey, the Maumtrasna Plateau, the Devil’s Mother, Bunacuneen and Ben Beg.

The church of the Immmaculate Conception (RC) is a  surprisingly Hispanic looking edifice with impressive stained glass windows. Lough Nafooey / Na Fooey (Loch na Fuaiche – “lake of the winnowing winds”) is a glacial lake straddling the border between County Galway and County Mayo in the Partry Mountains. A number of rivers / mountain streams feed the lake, including the River Fooey (Abhainn na Fuaiche), which rises from the Devil’s Mother mountain. The Finny River flows from the south-east of the lake eastwards down into Lough Mask. The lake has a small sandy shore at its western end and a small funnel-shaped island close to the south-eastern shore called Red Island (An tOileán Rua). The unpolluted waters hold a range of fish including wild brown trout and pike. (Photo by ClintMalpaso)

The area around Lough Nafooey is renowned among geologists as the location of the ancient Finny volcano, formed 490 million years ago as the Iapetus Ocean closed to bring the two halves of Ireland together. Some volcanic rocks can be found locally.

Mám Trasna (“pass across”) (682m), anglicised as Maumtrasna / Maamtrasna, the highest summit in the area, used to be called Formnamore / Formna Mór (“great shoulder”) and was considered part of County Galway until 1898, when it was included within the boundaries of County Mayo. The Irish name and derivatives originally applied to the pass on the route between Lough Nafooey and Lough Mask. The mountain has numerous spurs, such as Knocklaur, Benwee, Leynabricka, Skeltia and Buckaun, but few are peaks in their own right. The summit dominates much of Joyce Country.

Maamtrasna townland, a hillslope area populated by a scattered community living in small cottages and cabins and scraping a living from sheeprearing, was the scene of a horrific multiple murder on the night of 17th August1882. John Joyce(45) was shot dead. His wife Bridget (40), his mother Peggy (85), and daughterPeggy (16) were bledgeoned to death with coshes, iron bars and other weapons. The bodies were stripped naked and lay in the house for many hours before worried neighbours dared to venture in. Two sons, Michael (17) and Patsy (11), remained barely alive and were able to describe the attackers as four men with blackened faces wearing bawneens (Michael soon died from his injuries).

The next day three cousins of the murdered man, known as “the Maolras’ Joyces” (to distinguish them from the many Joyce families in the area), gave a sworn statement that they had followed a crowd of men the night before and seen them approach John Joyce’s house. Hidden behind a bush, they saw some of the men enter the house, while others stayed outside. Anthony heard shouting and screeching. ‘He could not distinguish the screams of the women from those of the men.’

The “Maamtrasna Massacre” became the main news of the day, receiving worldwide media attention. Journalists from Dublin and London descended on the locality and to try and get the inside story.

The police believed that John Joyce was a member of a local secret society, one of the many informal Ribbonmen / Fenian enforcement groups involved in theLand War then raging. The rumour was that Joyce had pocketed funds, and that an example was made of him and his family.

Thirteen locals, many of them related to the murder victims, were arraigned before a special court in Dublin in November 1882 in front of a mainly middle class and unionist jury; the language used in court was English, which none of the Irish-speaking prisoners understood. The Crown prosecutor “persuaded” three of the accused to turn “Queen’s Evidence”, on the basis of which eight were sentenced to death, including five who were subsequently reprieved.

The three “Joyces” who went to the gallows in Galway Prison on Friday 15th December 1882, in what was to be Ireland’s last triple hanging, were Patrick Casey(42), Patrick Joyce (35), and Miles Joyce (43) (who died in agony as executioner William Marwood was obliged to push him down by the shoulders to complete the drop even as the other two insisted on his innocence). The rest served long, harsh prison sentences; two died in jail, while the other three were released some 20 years later, still guilty in the eyes of the law.

A widespread public perception of injustice led to calls for the resignation of the Lord Lieutenant, Earl Spencer, and demands for an official inquiry in the British parliament,where CS Parnell MP, Tim Harrington MP and other Irish Nationalists raised the issue again and again, strongly supported by some Tories such as Randolph Churchill MP. Hearings held in secret in Dublin Castle served only as a whitewash. When Prime Minister WE Gladstone refused to authorise a public inquiry, the Parnellites withdrew their support, leading to the downfall of the Liberal  government in 1885. The new Conservative cabinet agrees to hold further investigations, but fell from power within months.

The true motives for the murders have never been clarified. Some alleged a blood feud between two branches of the Joyce clan, others claimed it was a matter of political allegiance. One version was that one of the victims had been a police informer and had identified the killers of a bailiff / two land agents during the ongoing Land War; another story was that the teenage Peggy had been seen flirting with an RIC constable. Despite numerous investigations, a wall of silence still prevails locally. 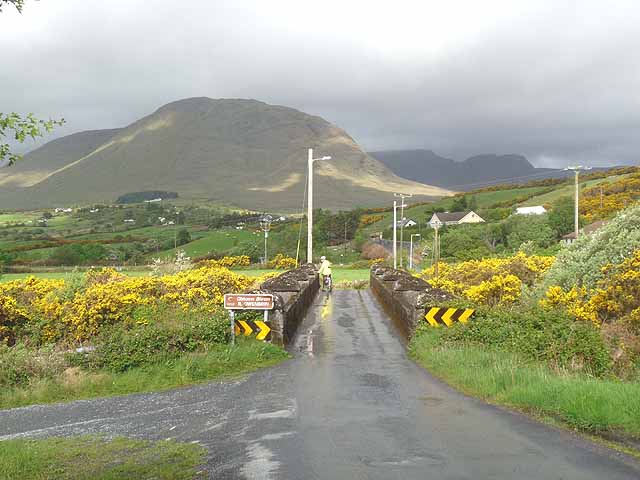 Killateeaun is not far from Tourmakeady on the shore of Lough Mask.