The region (as usually defined) lies within the medieval Barony of Ross. Historically, this area was settled c.400 AD by the Conmaicne Cuile Toladh, cousins of the tribe that colonised Connemara. The area also figures in legend; according to the Annals, this was where the last Firbolg king of Ireland, Eochaidh, son of Erc, was killed in battle c.1900 BC by the invading Tuatha de Danaan.

Joyce Country takes its name from a family of Welsh origin who arrived in Ireland with the Norman invasion and settled locally during the late C13th reign of King Edward I. Many people with the name Joyce still live in the area.

The surname may have been derived from the Norman French personal name Joie (joy). Some claim that the Latin Iodocus, from the C6th AD Breton saint’s name Iodoc, a diminutive of iudh, meaning lord, was adopted by the Normans in the form Josse. Another rather eccentic source insists that the name means “experienced in battle“.

The first recorded member of the family in Ireland was one Thomas de Joise / Jorse, a “free tenant” on the Norman manor of Ardrahan in southeast County Galway. Following Thomas’s marriage to Honora O’Brien in 1283, he was disinherited and expelled from the manor, leaving him without land or any means of earning a living. He seems to have taken refuge with his father-in-law, Turlough O’Brien. In his predicament, Thomas’s only recourse would have been to appeal to Sir William Liath de Burgo, who was then Lord of Connacht. Thomas was put in command of the Norman outpost castle on the island of Kirk in the north-western arm of Lough Corrib, known today as Castlekirk / Caislean na Circe and now in ruins.

Thomas travelled with his wife and servants by sea from Ennis to Leenane on Killary Harbour. It is recorded that on the sea journey, Honora gave birth to a son. From Leenane, the journey would have been over the hills and down in to the Maam Valley until they reached the lake shore and the castle that was to be the family seat for 300 years to come.

The surname has been deeply embedded in the province for many generations. They resisted the Crown, winning a famous skirmish near Lough Mask in 1587. Their “extraordinary stature” was remarked upon, and Archbishop Ussher called them “a race of giants“. One (tall) story tells of a Joyce crusader captured en route to the Holy Land, who was was shown buried treasure by an eagle and managed to escape with it, using the wealth to build the walls of Galway City. The family is included in  the “14 Tribes of Galway” who dominated the political, commercial, and social life of the regional capital from the mid-C13th to the late C19th.

Joyce is now a common surname  all over Ireland and indeed much of the globe. It is one of the most prominent family names amongst the Irish Travellers (An Lucht Siúil – “the walking people”), a traditionally nomadic Irish community often referred to as tinkers, knackers or “gypos” (from “gypsies”), known for drunken brawling and faction fighting.

Distinguished holders of the surname have ranged from soldiers, bishops and antiquarians to the celebrated Dublin-born author James Joyce (1882-1941) and of course the unlamented William Joyce (1906-1946), aka Lord Haw Haw, the New York-born, Galway-educated fascist and Nazi radio propagandist whose execution by hanging in London for High Treason after WWII was nonetheless of highly dubious legality.

Although the traditionally defined Joyce Country lies northwest of Lough Corrib and southwest of Lough Mask, but  does not include the eastern part of the isthmus between the two great lakes, the modern Joyce Country Mountain & Lake District takes in not only the communities of Maam, Maam Bridge, , Cornamona, Clonbur, Cloghbrack, and Finney, but extends eastwards to include  Cong, Cross & The Neale and also stretches northwards to include Tourmakeady.

Mám Éan / Máméan (“Pass of the Birds”), anglicised as the Maumeen Pass, between Binn Chaonaigh and Binn Mhór in the rugged Maumturk Mountains separating the Maam Valley from the Inagh Valley in Connemara, has been a pilgrimage destination since at least the  C5th AD. According to legend, Saint Patrick climbed here to bless the wild lands of Connemara, thereby converting what was probably a place of pagan rituals into a Christian shrine.

Leaba Pháiric (St Patrick’s Bed) is a cave-like hollow in the rock near Tobar Pháraic (St Patrick’s Well), the waters of which were traditionally believed to have curative powers for humans and cattle. Completing the shrine is a Mass Rock, used during C18th penal times when Roman Catholicism was outlawed, and stones representing the Stations of the Cross. 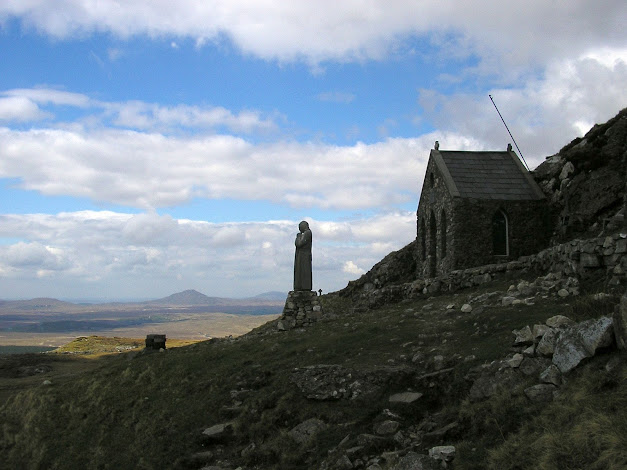 Cillin Phadraig is a small, more recently built chapel, in front of which stands a striking statue of  Saint Patrick with a ram, bearing the inscription “Pádraig Mór na hÉireann, Aoire Máméan” (“Patrick the Great of Ireland, Shepherd of Maumeen”). Dated 1986, it is the work of Cliodna Cussen. (Photo by Kevin Hawkins)

The annual pilgrimages to Máméan fell into disrepute in the early C19th when the accompanying festivites became occasions of raucous singing, dancing and faction fighting between rival families, fuelled by the local homebrew (poitín). The pilgrimages almost died out during the mid-C20th century, but thanks to Fr Michaél McGreal, whose grandparents had farmed sheep in the area when he was a child, the ancient tradition was revived and continues to thrive, with many people attending the annual Mass and pilgrimage on the last Sunday of July.

The scenery in the area is magnificent, with stunning views of theTwelve Bens mountain range and the vast plain of blanket bog stretching south to the sea. For those who venture higher, new vistas open up to reveal Gleann Fhada (The Long Glen), theMaam Valley and, in the distance, Lough Corrib.

Cnoc Doire Bhéal an Mháma (“The Mountain of the Wood at the Mouth of the Pass”) has a stony path leading up to the shrine, part of the Western Way walking route. The track across the mountains formed a prehistoric access route to Connemara.

Teernakill Bridge over the Failmore River commands superb views of the Maumturk mountains, the Maam Valley and Joyce Country.

The Maam / Maum Valley, carved out by glaciation during the last great Ice Age, stretches eastwards from Leenane and is divided by the River Bealnabrack and Joyce’s River, which join the Failmore River to flow into Lough Corrib. In medieval times it served as a buffer zone between the Norman de Burghs and Joyces to the east and the O’Flahertys to the west, and later became famour as superb sheep country.

Maam / Ma’am / Maum (An Mám – “the pass”) is a small village surrounded by ancient woods.

Keane’s Bar, an attractive old premises overlooking Lough Corrib, originally built as a home for the great Scottish engineer Alexander Nimmo, later became the Corrib Hotel, and was very accurately described by Lewis (1837) as “commanding a beautiful view of the picturesque scenery in this very romantic district.”

Maam Bridge / Maum Bridge is named for the fine structure designed by Alexander Nimmo to span the Failmore River just above its mouth on Lough Corrib.

White-o’-Morn, the cottage at the centre of John Ford‘s classic film The Quiet Man (1952), best remembered for the iconic threshold kiss between John Wayne and Maureen O’Hara, is now a roofless heap of rubble. Scenically set beside the river, it was bought in 1985 by a California-based Canadian businessman who has not responded to overtures from local and national authorities anxious to see the premises restored as a tourist attraction. (Photo – www.independent.ie)

Maam & Maam Bridge are northwest of Oughterard on the western shore of Lough Corrib.