“Connemara” is a name frequently misapplied to all of Iar Connacht / Connaught / Iar Chonnachta / Iarthar Chonnachta (“West Connacht”), a historic region west of the River Corrib / Lough Corrib and southwest of Lough Mask. The western parts of County Galway and southern County Mayo contain some of the most extraordinary landscapes in Ireland. From the verdant shores of Lough Corrib and Lough Mask, across increasingly wild and dismal stretches of rusty bog dotted with green-fringed lakes overlooked by ghostly pinnacles, to the stunning coastline of coves, inlets, long narrow bays and veritable fjords, the overarching north Atlantic sky provides a constant play of water-reflected clouds, soft drizzle and occasional sunlight to transform desolate valleys into arcadian dales and pretty twinkling loughs into pearly grey tarns or sinister black meres reminiscent of JRR Tolkien’s Mordor.

Populated since ancient times, Iar Connnachta was long divided into the territories of Dealbhna Thíre Dhá Locha to the east and that of the Conmhaícne Mhara people to the west, and later into the baronies of Moycullen, Ballynahinch and Ross.

Nowadays the name Iar Connacht is often applied to a reduced area between Lough Corrib and Galway Bay comprising the old baronies of Moycullen and Ballynahinch but no longer including the barony of Ross, within which Joyce’s Country straddles the border with County Mayo.

Of Co. Galway‘s offshore Western Islands, it is not clear if the Aran Islands in Galway Bay were ever regarded as part if Iar Connachta. The South Connemara Islands, Omey Island, High Island, Friar’s Island, Cruagh, Inishturk (not to be confused with the island to the north) and Turbot Island were undoubtedly part of Connemara, and Inishboffin & Inishark are also traditionally included, despite having been for a time part of Umhall, the territory of the Uí Mháille / O’Malley clan, like the larger Inishturk and little Caher Island off the Co. Mayo coast.

The first small bands of hunter-gatherers arrived about 7000 years ago, following migrating herds of animals, fish and fowl along the river valleys and coastlines. The dawn of the Neolithic period (c. 4000 BC) was marked by the introduction of farming, while the Bronze Age (2500-700 BC) saw an major increase in population.

Conemara derives from Conmhaicne Mara, the branch of the Conmacne tribe (descendants of the mythical Con Mhac – “Hound Son”) that lived by the sea (muir, genitive mara, hence “of the sea”); other branches inhabited different parts of Connacht. The main family lines were the Mac Conghaile / Conneely clan and the  Ó Cadhla / Kealy clan, who ruled Connemara until the C13th.

The Uí Fhlaithbheartaigh / O’Flaherty clan ruled Maigh Seola, the plain lying on eastern side of Lough Corrib,  which was included in Iar Chonnachta until the C13th. By then the family also controlled Dealbhne Thíre Dhá Locha and held some sway over the entire region, but were ousted from their eastern base by the advancing Norman conquerors.

Forced westwards, they soon established complete dominion over the local clans, and remained as lords of Iar Chonnachta for four centuries.  They built a series of castles along the coast and became known as the “Ferocious O’Flahertys“; an inscription on Galway City’s wall read “From the fury of the O’Flahertys, good Lord deliver us“.

The Normans failed to capture Iar Connachta, but families of Norman origin soon established themselved in the region, with surnames including Burke, Joyce, Staunton, Morris and Gibbons. It took only a few generations for these families to become Gaelicised in their customs and language.

In 1588 at least two Spanish Armada ships, the Falcon Blanco and the Concepción, were wrecked off the Connemara coast. Tradition has it that some of the horses escaped from the wrecked vessels and formed part of the brood stock of the now famous Connemara Pony.

Connemara suffered many changes during the C17th Cromwellian and Jacobite wars. An influx of new landlords from the east soon became consolidated. Many of the dispossed local chieftains fled to the continent, although some continued a lucrative smuggling trade with France and Spain.

The population increased steadily in the C18th and early C19th to one of the highest densities in Ireland, largely sustained on potatoes. 12 landlord families controlled the region; the Martins of Ballyinahinch owned the largest landed estate in Ireland, some 200,000 acres, which encompassed most of Connemara.

The Great Famine combined with appalling winters to devestate the area; the population collapsed in the years 1845-52, while several of the the old landed families, including the Martins, were bankrupted and forced to sell up.

The Connemara Gaeltacht (Irish Gaelic speaking) region overlaps with but doe not fit precisely within the traditional boundaries of Connemara, extending south and east towards Galway City. Although most of the region’s population still lives in sparsely scattered rural communities, some are more set in their traditions than others, and English is widely spoken among the younger inhabitants, particularly in the larger towns and in the eastern areas.

(An Beal Bocht , a novel written in 1941 by Brian O’Nolan under the pseudonym Myles na gCopaleen, released in English as The Poor Mouth by Flann O’Brien, is a hysterical satire of a Gaeltacht community and the fanatical Gaeilgeoiri (Irish language enthusuasts) who arrive to explain to the locals that not only should one always speak Irish, but also every sentence one utters should be about the language question. However, they eventually abandon the area because the poverty is too poor, the authenticity too authentic and the Gaelicism too Gaelic.)

Irish Language Colleges in the Connemara Gaeltacht run vacation courses for students from all over Ireland, who usually stay with host families. (We have personal memories of nightmares about being sent, but many of our contemporaries said they had a great time). A fairly typical example can be seen here. Some insights into how modern Irish teenagers regard the idea can be gleaned here.

The region’s myriad lakes, rivers and streams make it an anglers’ paradise, particularly for salmon and trout, with fisheries jealously guarded against poachers but supplying every whim for those prepared to pay for privileged access. Game shooting rights are similarly restricted.

The most important mountain ranges in the region are the Twelve Bens / Beal Beanna in Connemara proper and Na Sléibhte Mhám Toirc / the Maumturks/ Maamturks / Turks. The latter are not very high (max 702m) but provide and command superb views. Dedicated fell runners run from Maumeen in the south to Leenane in the north in a single day. A fine passage of purple prose describing the summits can be read here. Connemara Green marble, a rare form of matamorphised limestone formed over 600 million years ago, is found outcropping along a line between Streamstown andLissoughter.

Long prized for its variegated hues of green, and already treasured in prehistoric times, Connemara Marble continues to be of great value today.  It is available in large slabs suitable for buildings, and can be found in many stately homes and palaces around Europe.

Smaller chunks are carved into religious artefacts and pieces of jewellery. Known as “the gemstone of Ireland“, it is used for the pendant for the Scouting Ireland Chief Scout’s Award, the highest accolade in Irish Scouting. 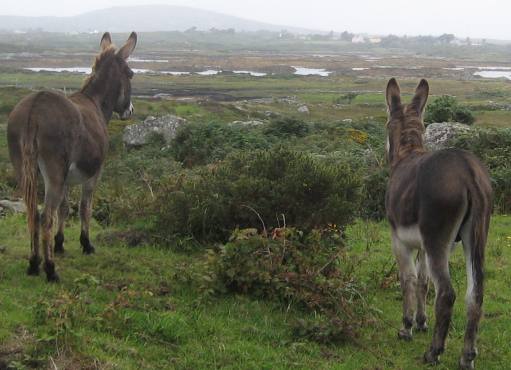 Connemara’s landscape is dotted with farm animals, of which sheep clearly form a massive majority, followed by cattle, but donkeys seem to form a surprisingly large percentage. (Photo by simon)

The Connemara Pony is a sturdy pony breed originating in the harsh landscape of western County Galway.

Some believe that the Connemara developed from Scandinavian ponies that the Vikings first brought to Ireland. Another likely source was the Irish Hobby, a now-extinct breed established prior to the C13th.

According to legend, galleons from the Spanish Armada ran aground in 1588, and the Andalusians on board were set loose. The Spanish horses bred with the native stock, refining the local ponies.

Arabian blood was added in the C18th for additional strength and stamina. They were also crossed with Hackneys and Thoroughbreds.Too much crossbreeding began to dilute the pony bloodlines, so the Connemara Pony Breeders’ Society, founded in 1923, worked to preserve the breed type. The stud book was established in 1926. Today, Connemaras are bred worldwide. The breed has a fine head with small ears and usually a slightly dished profile set on a well-arched neck, a short back and sloped, muscular croup. The hindquarters are powerful. The shoulder is sloped and long. Their legs have short, strong cannons and hard feet and a good stride length.

Connemaras tend to be handsome, intelligent, hardy and agile, with a lively but eager and trainable temperament, and long-lived.

In addition to farming, Connemara has a strong maritime tradition.

The Galway Hooker / húicéir is a simple traditional boat used in Galway Bay. It is identified by the distinctive sail formation, consisting of of a single mast with a main sail and two foresails. Traditionally, the boat is black (being coated in pitch) and the sails are a dark red-brown. (Photo – North Atlantic Skyline, an excellent site)

The main boats are the Báid Mhóra (big boats) and Leathbháid (half-boats), which in earlier times were used for hauling turf from the peat bogs in Connemara to the Aran Islands and the Burren of County Clare, where peat is absent. The smaller boats are the Gleoiteoga, which were traditionally used for fishing.

Recently there has been a major revival of interest in the Galway hooker, and the boats are still being painstakingly constructed.

Today the main activity of all these boats is racing, and there are numerous regattas along the Connemara coast. (Photo – www.boatdesign.net)

The Saint Patrick, built on Maoinis /Mweenish Island in 1906, crossed the Atlantic in 1986, and later went to Greenland and other Arctic destinations, including beyond the 80º latitude parallel off Spitzbergen in 1990. The Saint Patrick slipped her mooring and sank at Glandore in 2003. However, her skipper Paddy Barry went on to achieve even more fame by negotiating Canada’s North West Passage, and attempting Siberia’s North East Passage, in each case in Northabout, the sailing craft specially designed and built by Jarlath Cunnane of Dublin.

Other famous Galway Hookers include An Mhaighdean Mhara (‘The Mermaid’) and the Mac Duach.