The Iveragh Peninsula (Uíbh Ráthach) (Co. Kerry), between Kenmare Bay and Dingle Bay, is the largest peninsula in south-western Ireland. 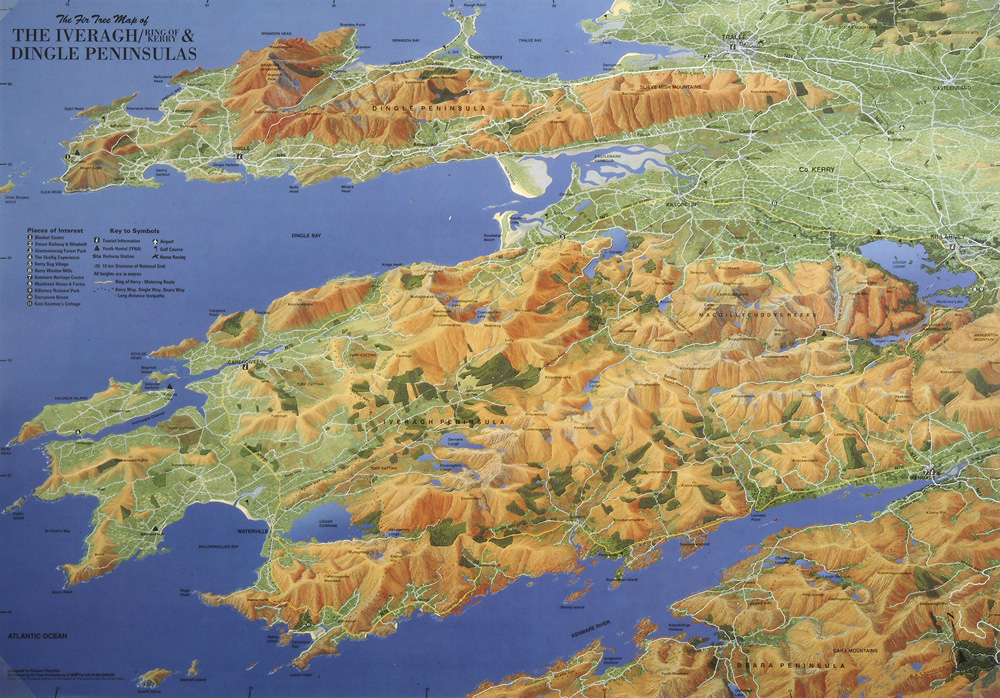 Much of the peninsula’s coastline is fringed by mountains, and apart from the two large Inny and Ferta river valleys, most of the land area is hilly or mountainous, with hundreds of summits, many of them nameless, clustered in a series of unnamed  ranges tumbling southwestwards from the highest peaks close to Mcgillycuddy’s Reeks, where Carauntoohill / Carantuohill (1040m / 3414ft) is the highest in Ireland.

Most of the coast road around the peninsula, renowned for its spectacular vistas, forms part of the famous Ring of Kerry, and can become rather crowded in summer.  The region’s lovely islands (the Skelligs, Valentia etc.) can be reached by boat from harbours along the route.

The Iveragh Peninsula was particularly hard hit by the Great Famine; due to its isolation and the precarious sustenance farming practised by its large  population, it is believed that tens of thousands died of starvation and disease, while many more emigrated to other parts of Ireland, Britain and America.

The Uíbh Ráthach Gaeltacht (Irish Gaelic-speaking area) encompasses areas off the Ring of Kerry such as Baile an Sceilg / Ballinskelligs and Bá Naomh Fhionáin / The Glen on the coast and Máistir Gaoithe / Mastergeehy along the valley of the lovely Inny River. This area is known for some of Ireland’s most breathtaking coastal and mountain scenery, with magnificent views of the Skelligs and Puffin Island.

The South Kerry Geopark, comprises an area bordered by Kenmare Bay, and extends inland to the mountains north of Tahilla, Sneem, Castlecove, Caherdaniel and Valentia Island. This is an area of outstanding geological interest, rich in natural history and human artefacts. Not yet part of the official European Geopark network, this local community initiative has high aspirations. A presentation can be viewed here.

The Iveragh Peninsula is here explored by a Coastal Route and an Interior Route.