Ceann Trá / Ventry is a picturesque if rather higgledy-piggledy village scattered around Ventry Harbour. It is said that Ventry was once the main port of the peninsula.

There are several community hubs: one is the Post Office with its prize-winning shopfront; there is a good pub near the primary school, and a more famous pub, belonging to the renowned Gaelic footballer Páidí Ó Sé, opposite the Roman Catholic church. Other commercial premises, including a café and at least one good restaurant, are somewhat dispersed along the seafront and around the neighbourhood.

The Battle of Ventry

Cath Fionntrágha / the Battle of Ventry, featured in the well-known Fenian Cycle myths, supposedly took place on the strand, perhaps around 230 AD.   T he tale, as told in a C15th manuscript now in the Bodleian Library, Oxford, describes how Daire Donn, King of the World, and his vassal monarchs landed at Ventry in an attempt to invade Ireland, and how they were defeated on the beachhead by the Fianna under Fionn Mac Cumhaill. Different versions of the story exist in folklore and other medieval manuscripts, presenting a confused and evidently non-historical picture but, significantly, they show a close familiarity with local topography.

Placenames which reflect the violent events of the battle survive in the area. There are fields called Cluain na Fola (”Field of Blood”) and Cúin na dtréan Fhir (”Slaughter of Mighty Men”). Parkmore Point is Cuan is Rinn na Bairce (”Barque Point”), to which the traitor Glas piloted the invaders.

In the townland of Caheratrant a gallán (Standing Stone) was placed to mark the grave of Caol / Cháil Mic Crimthainn, the last of the Fianna to die in the Battle of Ventry. The bogland at the border of Caheratrant and Raheen was once an oak forest where the legendary Fianna engaged in their favourite occupation, hunting.

Caherard, the hill immediately behind Ventry to the north, is crowned with a megalithic wedge grave known as Leaba an Fhir Mhúimhnuigh / the Munsterman’s Bed.

Kilvickadownig / Cill Mhic an Domnnaigh, the traditional starting place of Cosán na Naomh (“the Saints’ Road”) pilgrimage route to the top of Mount Brandon, is the location of  several interesting archaeological and historical remains, including a very striking cross slab.

Saint Manchan’s Oratory / Teampall Mhanachain / Teampall Geal (”the White / Bright Church”), is a relatively well-preserved edifice, very similar in design and construction to Gallarus Oratory. One of the cross-slabs at this early Christian site has both Ogham and Latin inscriptions. Saint Manchan himself is reputedly buried here. Settled from about the C7th to the C9th, it never developed into a later church site.

At a Holy Well nearby, a very popular Pattern used to be held on Easter Sunday, at which a fiddler from Dingle played at the crossroads. Such entertainments came under attack from the clergy from quite early in the C19th; priests were not above smashing musical instruments and preventing traditional musicians from earning any kind of living. While some Holy Wells are still visited for the purpose of devotions and cures, the “patterns” as entertainments were finally stamped out in the Peninsula by about 1940.

Kilcolman was an early Christian settlement. The roughly circular enclosure of about 148ft / 45m in diameter includes within it the foundations of huts, several graves and gravestones, a small cross-inscribed stone, a holed stone and three bullaun stones. The most notable element is an Ogham-inscribed cross-slab in the southeast corner of the site; the inscription has puzzled archaeologists, but it is thought that it is meant to read: ANM COLMAN AILITHIR – “Colman the Pilgrim”.

Rahinnane Castle was built on top of an ancient Ring Fort. The ruined Tower House was the principal residence of the Knights of Kerry; several similar castles were built in the C16th, some at least with the help of a £10 grant from the English government. It was captured by Sir Charles Wilmot in 1602 and was later “slighted” by Cromwellian forces. The edifice still has tiny narrow stone stairs from the first to second floors, which can be climbed with care. (Photo – www.westkerrymuseum.com)

Kildurrihy (Cill idir dá shruth – the church between two streams), a fine example of a Clachan, is the site of a ceallúnach or burial ground and of Templebeg, a small C8th or C9th AD church.

A Holy Well at the northern side of Kildurrihy is dedicated to Saint Brendan, on whose feast-day it used to be visited. Beside the well lies a stone tablet, broken in half, which is said to have been stolen away once but to have made its own way back.

From Kildurrihy a stony road rises to a lake on Sliabh an Iolair / Mount Eagle, a delightful place to fish or just to walk or sit. In evening light the steep cliff to the mountain summit looms magnificently. Beside the lake is a zigzag turf track with excellent views on a fine day; and from the summit there is another track down to the main road.

Fahan is a townland extraordinarily rich in archaeological remains, including  Standing Stones and sculptured crosses.

Clocháns / Beehive Huts are so densely scattered on the local hillsides that a C19th antiquarian was moved to refer to the “City of Fahan”. At one stage there were over 400 of these drystone corbelled huts surviving. They are thought to date from the C13th, when the invading Normans forced the locals off the good land and out to the periphery of the peninsula.

An Dún Beag / Dunbeg Promontory Fort, dramatically located on a sheer cliff promontory projecting into Dingle Bay at the base of Sliabh an Iolair / Mount Eagle, commands stupendous views of the coast, the Beara Peninsula and nearby islands. It is one of the most elaborate such structures in Ireland, with four earthen banks, five fosses and a dry stone rampart. Excavation results have shown that it was begun c.800 BC, during the late Bronze Age, and was still in use up to the C19th, but it is not clear what the site was used for; it may have been built for community defence, or used for ritual purposes, or it may simply have been a chieftain’s  dwelling.

The Dunbeg Fort Visitor Centre has interesting archaeological exhibits, shows an informative film about the region, its history, the fort itself, the nearby beehive huts etc., and also provides snacks and beverages.

Slea Head, the south-westernmost point of the peninsula, has been described as the most beautiful place on Earth, and the views are unarguably spectacular, with sheep grazing in near-vertical fields bordered by stone walls, forbidding cliffs, jagged rocks and a sandy strand.

Commenole Beach is particularly popular with body-, board- and windsurfers. There is a small monument commemorating the local filming of David Lean’s Ryan’s Daughter in 1970.

Garraun Point on Dunmore Head is the westernmost place on mainland Ireland.

Dún Chaoin / Dunquin, on the tip of the peninsula, enjoys breathtaking cliff scenery and views of Na Blascaoidi / The Blasket Islands. This is nowadays the most westerly settlement of Ireland, an honour that belonged to An Blascaod Mor / the Great Blasket, inhabited until 1953; Dunquin was the nearest point on the mainland from which supplies were sent over to the islanders.

Kruger’s Bar claims to be the westernmost pub in Europe. 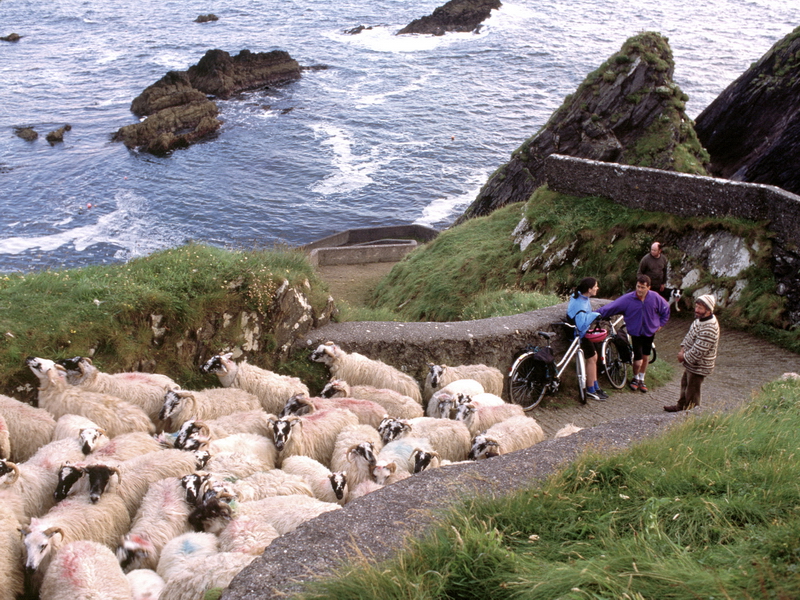 The Blasket Islands Ferry leaves from Dunquin Pier. The conditions have to be fairly good in order for the boat to moor on the other side.

In 1588 several Spanish Armada ships sought shelter in the Blasket Sound, and at least one was wrecked there. Crewmembers’ bodies were buried near the village, and a memorial stands on the cliffs overlooking the Sound.

Vice Admiral Recalde had seen this coast beforem on a 1580 expedition to put Italian soldiers ashore in Smerwick Harbour, and knew about the tiny gap between Great Blasket and the reefs / islands to the northeast. He went through first on 14th September 1588 in the San Juan, followed immediately behind by the frightened but trusting Captain Aramburu in the San Juan Bautista. This has long been regarded as an act of truly superb seamanship, proving the failure of the Spanish Armada was related to many factors including maybe the quality of its ships, but distinctly not the skill of the men who sailed them. The two ships swapped anchors, sent men ashore for water, and then waited.

On 21st September, a big storm came up, in the middle of which appeared the Santa Maria de la Rosa. Her anchor held only as long as the tide was flooding, but once the tide changed, the wind and tide had her, so she slipped away, and was lost with all hands in less than 2 hours.

Then another San Juan Bautista appeared with a smaller ship. As both were considered spent, they were scuttled, and their crews taken aboard the first two San Juans. All made it safely back to Spain.

According to contemporary English accounts, a ship called Our Lady of the Rosary “was wrecked in the Blaskets, in which was drowned the Prince of Ascule, the King of Spain’s base son …. with 70 other gentlemen … and John Rice, an Irish Captain; Francis Roch an Irishman and 500 others, whereof 100 were gentlemen. There was but one person saved – John Antonio de Monona, a Genoese and son of the pilot.” No Spanish Prince had ever been on board any of the ships, but this false information proved useful propaganda.

Clougher Strand is a beautiful sandy enclave with unique currents producing spectacular seas. The strand is best viewed toward dusk when storms are approaching. It is not suitable for swimming at any time.