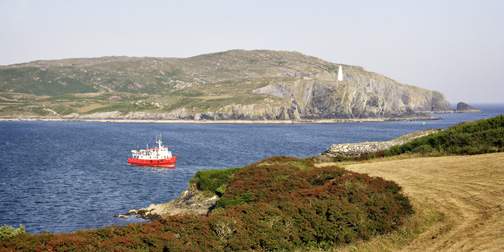 Sherkin Island measures 5km / 3mi by 3km /1.5mi, and has a special character of its own.

Sherkin experienced the same population loss as other islands during and after the Great Famine, but has since then been ”discovered” by artistic types from all over the globe.

Although the indigenous islanders are the lifeblood of the community, many residents come from Britain, France, America, Germany, Denmark, Russia, Canada, the USA, and Australia. Amongst Sherkiners one can find artists, book writers, musicians and photographers, beekeepers and pilots, cattle, mussel and oyster farmers, biologists, botanists and oceanologists, fishermen and sailors, teachers and doctors, horse lovers and strawberry growers.

Sherkin has a community centre, a church (RC). a primary school, a couple of shops and two pubs.

The island has 5 miles of narrow roads. The islanders get about in old bangers brought from the mainland, modern ATVs, on horseback, and mostly on foot orby bicycle. A local taxi service is available for most of the season (ask for Dan on the ferry). Bikes can be hired at the pier. Sherkin Lighthouse (1835) is, unusually, maintained by locals. (Photo by benjaminspeedy)

Sherkin Island Marine Station is a privately run research centre, mainly staffed by volunteer scientists. It has an exhibition hall and aquaria containing sea mammals, fish, starfish, sea anemones and shrimps. There are also displays of butterflies, moths, beetles, spiders etc, and a herbarium of plants and seaweeds. For many, the Station is the highlight of a visit to the island. (Details)

Dún-na-Long (”Fort of the Ship”), a castle built by Florence O’Driscoll in 1460, was destroyed in April 1538 by the merchants of Waterford, who were angry at the O’Driscolls’ gangster methods of defending their fishing rights “tax” monopoly. In particular, the merchants wanted to punish the O’Driscolls for a disgraceful incident on 29th February of that year, when they had inveigled a Waterford bound Portuguese ship for to shore, incarcerated the crew and stolen all the wine aboard. The merchants, somewhat carried away, also burnt the island’s C15th Franciscan Friary and torched Baltimore, gleefully assisted by the rescued Portuguese.

The Friary, locally known as “the Abbey”, is now partially restored and used for exhibitions, and has an upstairs landing with good views. (Photo by songlines)

Local artists exhibit their work at their homes, dotted about the island.

Silver Strand, Cow Strand and Trabawn beach are popular for camping, picnics and BBQs; they can be rather windy. Sherkin prohibits skinny dipping unless sober.

Horseshoe Harbour is a remarkably attractive bay, simultaneously secluded and conveniently close to all amenities.

Horseshoe Cottage, a restored farmhouse, is the home of holistic therapist Fiona and writer / translator Joe Aston, who run it as a Guesthouse and also own the Anna M, a 45′ schooner used for sailing excursions geared towards whale and dolphin watching. The Anna M. (Photo by Redsontour)

Other local accommodation facilities stretch to a friendly hotel (with a good restaurant), some campsites and several self-catering holiday homes.

Sherkin is a ten-minute ferry ride from Baltimore, and can also be reached in summer by ferry from Schull.