“Carbery’s 100 Isles”, a term that could refer to all the islands along the coast of the ancient Barony of Carbery, is actually used mainly for those in and around Long Island Bay and Roaringwater Bay (Co. Cork). Historically, many sustained offshore communities, and a few still have year-round populations.

Bathed by the Gulf Stream, they have a warm, almost subtropical microclimate of their own, often enjoying sun and mild breezes when the mainland is grey and gloomy. However, these islands are also very exposed to the elements, so patches of lush vegetation contrast with treeless expanses of hill and bog, fringed with rocky cliffs and mixed shingle and sand beaches. 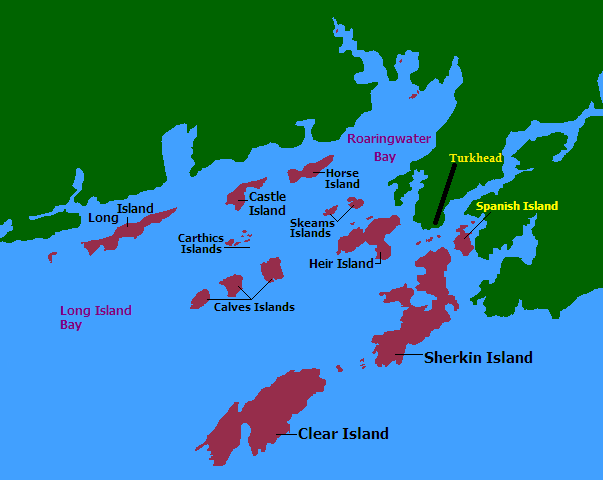 The most famous are Cléire / Cape Clear Island and Sherkin Island, but Carbery’s 100 Isles also include Spanish Island and others described in relation to Baltimore and Skibbereen on ByRoute 1,  plus:

The Calf Islands, a chain of treeless islets occupying the most central position in the whole bay, were populated until the 1940s. The ruins of several abandoned houses stand near a couple of holiday homes. Hares roam free, and there are a few grazing cows.

Carthy’s Islands, a pretty but scattered and very exposed little archipelago, are home to large numbers of sea birds, mainly gulls. These damage the vegetation by trampling and over-enrichment with their droppings. North Carthy Island has in the past been grazed by sheep.

The island derives its English name from a ruined C14th Tower House, one of 12 built by the powerful O’Mahony clan in the area.

The 1837 census recorded 89 people living on the island. At present there are fewer than 30 permanent residents, who make their living from farming.

This is a most attractive island, with nicely laid out boreens and excellent views. It is a great place for birdwatchers, as in addition to the varied seabirds, there is a resident community of choughs, and Peregrine falcons can be observed hunting.

Castle Island can easily be reached by boat from Schull.

Goat & Little Goat Islands, just off the Mizen Peninsula, are the westermost of Carbery’s 100 Isles, and probably the most difficult to reach due to the many rocks surrounding them.

Once inhabited by a close-knit community of 400 people, it is nowadays home to several well-known artists and craftsfolk, attracted by the picturesque location and peaceful atmosphere. Many of the original houses have been restored as holiday homes. The old village / main residential area is noted for its quaint “bridge of Paris”.

Over 200 species of wild flower grow on Heir. The shore features seven sandy beaches, caves, creeks, and a sea arch,  making it an ideal place for bathers and canoeing / kayaking and diving enthusiasts alike. The Doon (An Dúin) at the western end of the island commands a spectacular panorama of Carbery’s 100 isles and Mount Gabriel on the mainland. Towards the southern Reen area there is a reed march where many unusual birds can be spotted.

The Burial Ground Cross, commissioned by the Heir Island Association and made by Martin and Gerry Harte, was erected to mark the cillín / graveyard for unbaptised children.

Island Cottage is a famous restaurant and cookery school run by artists John Desmond and Ellmary Fenton, noted for sourcing organic / wild food on the island. The waiting list is legendary.

The Heir Island Regatta is usually held in August on the Thursday before the traditional boat weekend at nearby Ballydehob on the Mizen Peninsula.

A ferry links Heir’s extreme eastern point with Cunnamore Pier on the mainland opposite. Note the steps cut into the solid rock long before the modern pier was constructed.

Horse Island is privately owned, but sporadically let to rich vacationers. There are several stone houses, both old and new, one very substantial, and a helipad.

Horse can be reached on foot from the mainland at very low tides on the eastern side, where the ruins of an old village still stand. This is linked by stony track with a landing stage at the northwestern corner of the island.

100 men worked in the island’s copper and mineral mines in the C19th; the copper used to be sold in Swansea.

The low-lying (37m) island has a number of coniferous and deciduous trees, notably willows, and several unusual and exotic plant species. There are extensive areas of scrub and bracken (infested by ticks), and some coastal grasslands  where sheep graze (goats were removed in 1994).

Inishleigh is grazed by cattle that cross over from the mainland at low tide. At the northern end of the island there is saltmarsh and a shingle strand.

Long Island (Inis Fada), the third largest of Carbery’s 100 Isles, is the westernmost of any size, and of course gives its name to the main bay. The mostly narrow body of water separating it from the Mizen Peninsula is called Croagh Bay.

The island’s most distinctive landmark is the White Tower lighthouse at its eastern end, marking the entrance to Schull Harbour.

A track runs the length of the low-lying island, fading into a rough path near the eastern end, where sheep and cattle graze an enclosed area of heathland.

Long Island still has about 20 permanent residents, who mostly live on the northern side of the central part. Farming is the only economic activity.

Islanders carry livestock to and from the mainland in a curious fashion: one boat tows another, with the towed boat having the cow attached to its stern, held fast. In more leisurely days, the cows swam the channel.

Long Island can easily be reached by ferry / boat from Schull.

Mannin, a mostly low-lying island at the northern end of Roaringwater Bay, was once home to some 20 members of the O’Driscoll clan; the ruins of their former settlement can be seen near the few remnant trees.

Quarantine Island was used to isolate cattle from visiting ships, which might have contagious diseases.

These two islands are very different in character.

Skeam West has a ruined church said to date from the C9th, and a sheltered pebble beach below some restored stone houses occasionally rented as holiday homes.

For obvious reasons, the former inhabitants of these islands had a reputation for engaging in madcap plans, plots and conspiracies.

The Fastnet Rock is the most southwesterly point of Ireland.