MV Kestrel departs fromEnniskillen’s Round ‘O’ Quay for two-hour cruises of Lower Lough Erne, including a stop off at Devenish Island.

Portora ford, at the narrow exit of the River Erne into Lower Lough Erne, has seen considerable traffic in peace and war. In the course of the Erne Drainage Scheme (1951-1960) a bronze dirk and stone axes were recovered at this point.

Portora Castle was built in 1612 for Sir William Cole, whose descendant Sir Michael Cole and his family took up residence when Enniskillen Castle was damaged by fire in 1710 and remained until c.1716, when Sir Michael’s son, John Cole (1680-1726), started building Florence Court.

The castle is now in ruins, partly because a section was blown up by a group of C19th truant school-boys from nearby Portora Royal School who were experimenting with gunpowder; they also tried digging under the building, which added to its dereliction. Nevertheless, three of the original four defensive round flankers towers remain, and proper fireplace chimneys can be seen in the north and west walls.

The Skonce, an earthwork on the lough shore, may be the remains of an earlier motte. 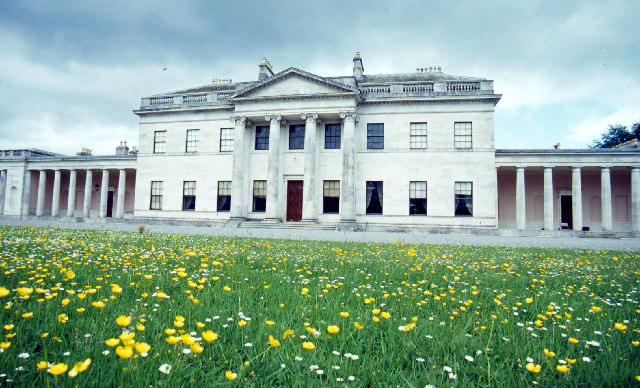 Castle Coole, one of the most impressive Big Houses in Ireland, is located in open parkland surrounded by ancient oak woods in the Killynure Hills just outside Enniskillen. (Photo by Stephen McKay)

The name derives from Lough Coole (from cúil – “seclusion”), where a crannóg and a nearby ráth are reminders that the area has been settled since prehistoric times.

In 1611 an English Planter, Capt. Roger Atkinson, was granted the 1000-acre manor on condition he developed the land. By 1656, when it was purchased by John Corry, a Scottish merchant in Belfast, the estate had grown considerably, with water mills, orchards, numerous cottages, several larger houses and a lakeside castle (destroyed in the 1689 Siege of Enniskillen).

Armar Lowry-Corry, MP for County Tyrone and wealthy heir to 70,000 acres of land throughout Ireland, was created Baron Belmore of Castle Coole in the County of Fermanagh in 1781, Viscount Belmore in 1789, and Earl of Belmore in 1797. (Belmore is the name of a nearby mountain). Living in a relatively small townhouse on Dublin’s Sackville St., he commissioned a new lakeside summer house, soon to become the principal family home after the 1800 Act of Union obviated the political need to stay in the capital.

The neo-classical Castle Coole mansion was constructed between 1789 and 1798 at a cost of £57,000 (equivalent to approximately £20 million in 2010). The first architect was Richard Johnston, soon replaced by the more fashionable English designer James Wyatt.

Somerset Lowry-Corry, 2nd Earl Belmore, provided much of the Regency style furniture in the house. Having represented County Tyrone in both the Irish and British House of Commons, he sat as an Irish Representative Peer in the House of Lords from 1819 to 1841, and also served as Governor of Jamaica from 1828 to 1832.

Armar Lowry-Corry, 3rd Earl Belmore,  died in 1845 at the age of 43. His brother Henry was First Lord of the Admiralty from 1866 to 1867. His younger son, Montagu Corry, 1st Baron Rowton, was private secretary to Benjamin Disraeli. The widowed countess survived till 1904.

Somerset Lowry-Corry, 4th Earl Belmore, was a popular Governor of New South Wales from 1868 to 1872, commemorated by the Belmore Park railway stations of Sydney and Goulburn.

Armar Lowry-Corry, 5th Earl Belmore, born in Government House, Sydney and baptised in Sydney Cathedral, was in charge of the family’s ancestral seat during WWII, when all country houses in the area were requisitioned by the armed forces because of the strategic importance of the flying-boat base on Lough Erne. As Mark Bence-Jones explains, “Lord Belmore, an elderly and autocratic bachelor of elephantine build, tried to keep the military out of his own demesne of Castlecoole (sic), but it was discovered that the place was held originally by a Plantation grant which obliged the grantee to help with the defence of the country. So the authorities declared Castlecoole escheated, giving it back to Lord Belmore when the military left. The military did not, however, go into the house, where Lord Belmore lived on undisturbed. Living with Lord Belmore in that palatial classical mansion overlooking a lake inhabited by a flock of greylag geese were his rather sad bachelor brother and his four unmarried sisters, the Ladies Lowry-Corry, with whom he was not on speaking terms. When Lord Belmore first inherited Castlecoole there were eight unmarried sisters living with him there; since then one had married and three had died – one drowned in the lake and, according to legend, turned into a greylag goose. Lord Belmore and his brother and sisters had always occupied the same places in church, strung out in a line according to age; there were gaps where the deceased Ladies Lowry-Corry had been, for when they died the survivors had not closed ranks.”

Cecil Lowry-Corry, 6th Earl Belmore, died without issue within 18 months of inheriting the title from his childless brother. The two sets of death duties prompted their cousin, the 7th Earl, Galbraith Armar Lowry-Corry, to sell the property to the National Trust in 1951, with the family retaining the house interior, furniture and various private domains.

The mansion is most famous for its impressive white Portland stone façade. Notable interior features include the finely-detailed decorative plasterwork by English artist Joseph Rose, the splendid floorings, a Grecian staircase hall, a double-return cantilever staircase, a French Empire drawing room and a ladies’ workroom furnished in a Chinese style. An unused State Bedroom, prepared in 1821 for King George IV (who failed to show up) retains original furnishings and flock wallpaper. A Victorian bedroom now commemorates Castle Coole’s Australian connection.

The extensive basement contains the kitchens, servants’ quarters, a Roman style bath and a brewery. The Servants’ Tunnel linking the basement to the exterior was the only route for employees to access the building.

There are numerous out-buildings, notably the Grand Yard, a general workplace housing stables, a Laundry House, a Dairy and an Ice House. The Tallow House, originally used for candle-making, now contains a reception area, Tea Rooms and a gift shop.

The 1200-acre estate, although largely given over to agriculture, contains extensive native oak woodlands and several other small lakes, including Lough Yoan and  Brendrum Lough.

Castle Coole is open to visitors all year, but admission to the mansion is by guided tour only from March to October.

Brookeborough (pop. 500) is a village with five Christian churches, three public houses, and two primary schools. It is located in the townland  of Aghalun (from Achadh Lon -“field of blackbirds”), former Maguire clan land  granted for services rendered in the 1641 Rebellion to Sir Henry Brooke (d. 1671), after whom the village is named.

The Lady Brooke Memorial Hall (1901), adjacent to the leonine Boer War Memorial at the head of the main street, preserves all its original features, including a fine clock tower and transverse stained glass window panels.

The Clogher Valley Railway ran through the village from 1887 until its closure on 1st January 1942.

On 1st January 1957 two IRA volunteers were shot dead in an attack on the local RUC barracks, marking the opening of the short-lived 1950s Border Campaign.

The Riverbrooke Cross-Border Initiative, launched in 2002, links the village with Riverstown, Co. Sligo in a cross-community/cross-border working programme.

Descendants include Field Marshal Alan Francis Brooke, 1st Viscount Alanbrooke, and Basil Brooke, 1st Viscount Brookeborough, Prime Minister of Northern Ireland from 1943 until 1963. The current 3rd Viscount Brookeborough is one of the ninety elected hereditary peers that remain in the British House of Lords after the passing of the House of Lords Act 1999, and sits as a cross-bencher. The severe neo-Classical house, designed by Dublin architect William Farrell, was built in 1822 at a cost of £10, 381 for Sir Henry Brooke (d.1834); the resemblance of the main front to neighbouring Castle Coole is striking and deliberate. (Photo – www.stonedatabase.com)

Various alterations and additions reached a climax under Sir Victor Brooke, 3rd Bt (d.1891), a noted naturalist and hunter who introduced Sika deer into the park. Oscar Stephen observed in his 1894 biography that few houses showed their owner’s proclivities more distinctly: ‘From floor to ceiling, heads of every variety were to be seen; …bison, wild boar, moufflon, Neilgherry ibex, Pyrenean bouquetin … every known variety of red deer … markor, brahsing, ovis ammon, burrel … a grand series of roe’s heads …over the chimney piece in the hall the huge horns of an Irish elk and two enormous German red deer … two of the tigers he had killed in India … the famous black panther, and, most valued of all, the monster tusk of the great elephant, whose mighty bones … lay in mighty massiveness round the foot of the billiard table.’ This tasteful  décor prompted Lord Craigavon, first Prime Minister of Northern Ireland, to christen the dining room ‘Golgotha’. The collection of dead animals, skulls and bones has since been removed.

Alan Henry Brooke, the current Viscount Brookeborough, and his wife Janet run the  property as a working estate, and also open their sensitively restored stately home and gardens for corporate events, weddings and paying guests, particularly those interested in shooting and fishing.  Yohm yoga retreats are held at Colebrooke Park several times during the year.

Visitors approach the house along a sweeping avenue, enter through the grand entrance beneath the portico into a large hall dominated by the impressive main staircase. The library, drawing room and billiard room are decorated with original Victorian wallpaper, family portraits, C18th porcelain and fine furniture.

12 luxurious double bedrooms and one single have been individually and tastefully decorated by the Viscountess. Recent modernisations include the addition of central heating and the installation of en-suite bathrooms, some featuring traditional full-length, cast-iron baths with ball plugs.

Guests are made to feel like esteemed family friends, with no parts of the house being off-limits. Lady Brookeborough uses quality local produce to create excellent meals, from formal dinner parties in the impressive dining room (which seats 30 at a long table) to informal lunches in the kitchen, as well as picnics and afternoon teas.

Long walks can be enjoyed through the landscaped gardens, ancient woodlands and park, which enjoys a three-mile frontage onto the Colebrooke River, good for pike and trout fishing. Over 1000 acres are available for both driven and rough snipe / woodcock / pheasant shooting, plus excellent sika, fallow and red deer stalking. Other outdoor activities include archery and clay pigeon shooting, and there are purpose-built wildlife observation hides.

Bellanaleck, 6km southwest of Enniskillen, is the location of the Sheelin Irish Lace Museum.