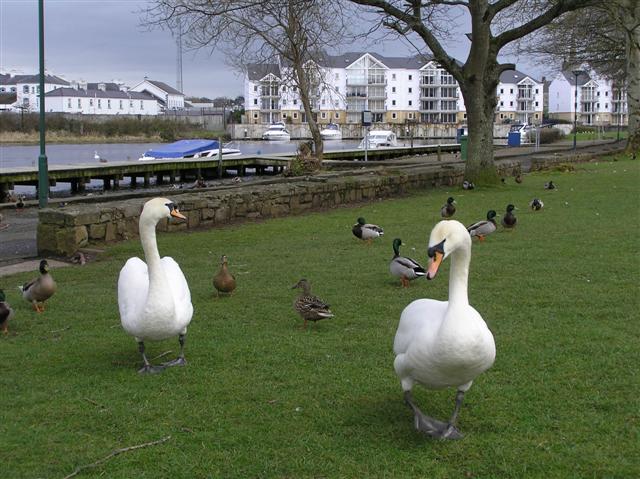 The Round O at Brooke Park is a picturesque recreational area, where boats moor at floating jetties and children feed the remarkably docile swans and ducks. (Photo: “A devoted couple?” by Kenneth Allen)

Enniskillen Castle is the town’s oldest extant building. Originally situated on its own River Erne island, the Maguire stronghold was erected by Hugh the Hospitable, who died in 1428.

Damaged by the siege of 1594, the edifice was rebuilt as an English garrison fort by William Cole. Scottish influence is apparent where the turrets are corbelled out from the angles of the main wall.

The Water Gate, a twin turreted tower dating from the early C17th, is thought to be a reconstruction of a structure built c.1580 by Cu Chonnacht Maguire; the subsequent lowering of water levels has left it high and dry.

The arcaded military barracks was constructed in the C18th.(Photo  – www.igougo.com)

The only original C15th part of the building is the lower storey of the keep, now The Royal Inniskilling Fusiliers Regimental Museum.

The Methodist church on Darling St, erected in 1867, has an impressive Palladian facade with projecting Corinthian portico. Two sweeping staircases leading to a horse-shoe shaped gallery inside can be seen from the exterior. The interior has fine cast-iron balustrades.

McArthur Hall (1888), a fine little neo-Tudor edifice, was designed by Thomas Elliot, who also refitted the adjoining Methodist church. Sir William McArthur was an Enniskillen man who became Lord Mayor of London in 1880 and generously gave to his former congregation.

Blake’s of the Hollow, a charming Victorian pub dating from 1887, is said to serve the best pint of Guinness in Ulster, and hosts traditional music sessions every Friday night.

St Michael ’s church  (RC) dates from 1875. The building has a steep roof and is actually best viewed from the rear. The gloomy interior contains a 1908 pulpit by William Scott, frescos by Charles Russell and interesting stained glass windows, one of which portrays Saint Molaise, founder of the Devenish Monastery.

St MacCartin’s Cathedral (CoI), visible for miles around because of its 150ft tower and spire, was originally founded c.1627 as the parish church of St Anne, and completely rebuilt in 1842. (Photo – www.archiseek.com)

Hardly any of the original church remains, but part of its tower was incorporated into the present one and can be seen above the main entrance door where there is a small, old three light lattice window and a stone inscribed with the date 1637.

In 1921 a bill was enacted to change the status of the parish church, and since 1923 the Diocese of Clogher has resembled Dublin in having two Church of Ireland cathedrals, St Macartin’s in Enniskillen and the older St Macartan’s in Clogher itself.

The Cathedral is noted for its bells, with one in particular being cast from a cannon used in the Battle of the Boyne.

Inside, GeneralSir Galbraith Lowry Cole, who also overlooks the town from his Column in the Town Park, is commemorated. The Buttermarket, dating from 1835 and wonderfully renovated, now provides a venue for local artists and artisans to display their wares.

Crowe’s Nest, a lively pub with a conservatory and patio, has traditional music session on Monday evenings in summer.

The Town Hall, completed in 1901, was designed as a competition entry by Anthony Scott with his son William, a talented musician and carpenter who carved the splendid front door and main fireplace by hand.

Inside, the lobby features a finely detailed floor mosaic of the Enniskillen coat of arms, created by specially hired Italian artists. It survived a 1972 bomb blast, unlike the remainder of the floor, which had to be replaced. The assembly hall on the piano nobile, reached by a fine marble staircase, was reduced after the bomb damage.

The Clock Tower is six stories high and can be seen from everywhere, complete with its copper dome and statues marking the town’s military heritage.

The Bandstand outside the Town Hall is used regularly through the Summer.

The Courthouse, a rather plain edifice originally erected c.1785, was largely rebuilt by William Farrell in 1820-21, when the heavy Doric porch was added.

The Scots’ church (Presbyterian) near the East Bridge was constructed in 1897 to replace a previous edifice believed to have dated from 1649. It is a simple structure with an unusual entrance porch almost the full width of the building. The interior contains three stained glass windows of note. There are several other Presbyterian congregations in and around Enniskillen. 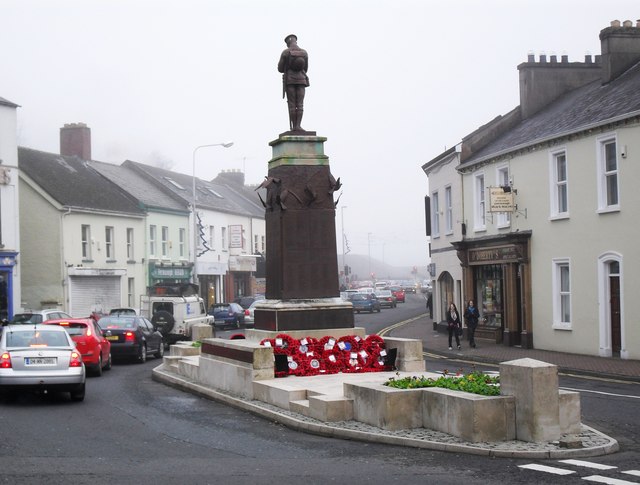 The Cenotaph honouring the dead of WWI and WWII appears little scarred by the notorious IRA bomb explosion that killed 11 innocent people on Remembrance Sunday 1987. (Photo by Dean Molyneaux)

The Boer War memorial, an obelisk on Wellington Rd, commemorates 500 Inniskilling Dragoon Guards and Royal Inniskilling Fusiliers killed in South Africa between 1892 and 1902.

The Clinton Centre is dedicated to President Bill Clinton of the USA for his contribution to the Northern Ireland Peace Process. and was opened by him in 2002, Costing more than £3m, the dramatic modern building includes education and community facilities and an art gallery. It sparked a furious architectural debate in the letters columns of Fermanagh’s oldest newspaper, the Impartial Reporter, with critics declaring themselves “appalled” by what they saw as a “monstrosity”.

Erneside shopping centre, a modern retail facility of no particular interest, is unusual in providing moorings for customers’ boats. The Cole Memorial is a tall pillar topped by astatue of GeneralSir Galbraith Lowry Cole GCB (1772 – 1842), a hero of the Peninsular War under Wellington and later Governor of Mauritius and the Cape Colony.  (Photo – www.tripadvisor.com)

Started in 1845, the monument took twelve years to complete. For a small admission charge sightseers can ascend a 180-step spiral staircase to a viewing platform commanding magnificent vistas of Enniskillen and the surrounding area.