Tory Island / Toraigh / Oileán Thoraigh (previously Oileán Thúr Rí) (pop.170), located about 10 miles off the north coast of Co. Donegal, claims to be the most northwesterly point in Europe. The island has been peopled for at least four thousand years, and although tiny, is rich in history and folklore.

Tory is by common consent the most isolated,  desolate and windswept of all the inhabited islands off the Irish coast. Even in recent times, the great waves rolling in from the Atlantic and the deceptive currents sweeping through Tory Sound have severed communication with the mainland for up to six weeks at a time with the worst storm conditions imaginable. (Photo by Paul Kernan)

Tory  is best known for its spectacular scenery, with grassy headlands leading to pinkish granite cliffs and towers of rock rising up from the sea, battered by the Atlantic into extraordinary shapes; these and the few old manmade structures scattered across the island bear names reflecting a local blend of pagan and Christian traditions. Sightseeing. 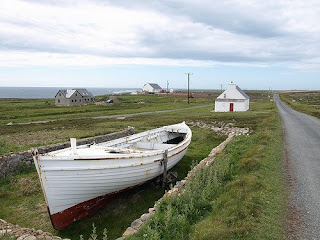 The island is divided among four “towns”, imaginatively called An Baile Thiar (West Town – the only real village), An Baile Thoir (East Town), An Lár (Middletown) and Úrbaile (Newtown). Ulster / Donegal Gaelic is the island’s main tongue, but English is nowadays more widely spoken as a first language than in most Gaeltacht areas.

The island’s only regular entertainment venues are the hotel bar and the Community / Social Centre, where céili and other events (recitals, plays, films etc.) are  often held, and visitors are warmly welcomed.

A strong tradition of music, dancing, sean-nós singing and story telling has been nurtured for centuries, and survived to this day despite the advent of radio, TV, video, CDs, DVDs and the Internet. Most musicians on Tory tend to favour the accordion or the melodeon.

The Tory Island School of Painters

Tory Island is nowadays most famous for its remarkable artists. The great English painter Derek Hill [1916-2000] encouraged local men who watched him paint on his trips to Tory to take up brushes, leading to the creation of the Tory School of “primitive” / “naïf” painters, who sell their work all over the world, including New York, Los Angeles, Tokyo, Sydney, Rome, Paris, London and even Dublin. The power of the sea is a constant theme in these paintings. 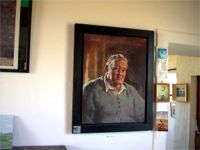 Gailearái Dixon is an exhibition space for paintings by all the Tory artists, and also shows work by mainland artists.

Patsaí Dan Mac Ruaidhrí / Patsy Dan Rodgers, another Tory artist, is also Rí Thoraí – ‘King of Tory’, a traditional post with no formal power, but chosen by consensus of the islanders to represent the community. Patsy Dan tries to greet all visitors as they arrive off the ferry from the mainland, and is the author of a welcoming page on the island’s attractive website.

Rev. Hugh Forde, in his Sketches of Olden Days in Northern Ireland (1923), reported that “when occasion requires more than usual deliberation on the part of the people, they elect a king. On one occasion when the august ceremony took place, it was for the purpose of considering whether geese should be allowed to be kept on the Island, as complaints had been made that they injured the crops. A legislative decree was the result, banishing all geese for the future.”

A BBC reporter who joked that he expected to find “an isolated maritime community peopled by men in well-cut blazers with strong views on immigration” was almost onto something, as Toraigh, meaning “outlaws”, was adapted into C17th English to refer to unreliable sellers of cheap and shoddy goods, and applied by the liberal Whigs to their conservative opponents in Parliament.

The same BBC journalist, describing the ferry that he took to the island, wrote that it “butts its way through the waves like a ping-pong ball in a dishwasher – you can duplicate the experience at home by eating a large meal of underdone fish and lightly-boiled eggs, then performing a somersault in a car-wash. ” However, he would doubtless agree that in calm  weather the crossing is sublime.