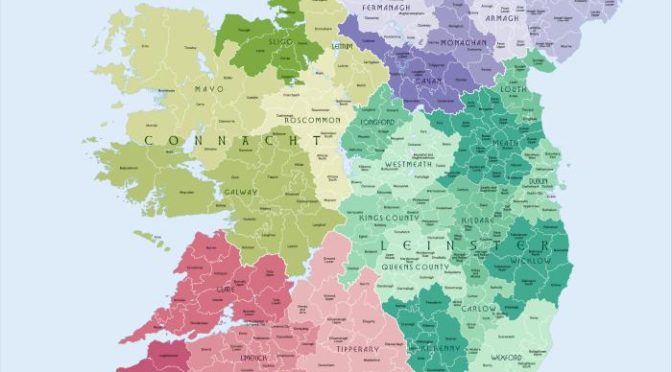 That said, we have to admit that some parts of the country are exceptionally interesting, historic, beautiful, exciting, inspiring or special in some way. Of these, several overlap.

Many of the areas we had in mind do not fall within single county boundaries. We rejected the 4 Provinces as criteria, and decided that using parts of them (South Ulster, Oir Connacht, Thomond  etc.) would not work either. We argued about ancient  and medieval territories  (Breifne, Ely, Ossory, Muskerry, Decies, Carbery etc.) and also looked at Geological zones. We finally decided not to worry about definitions, and simply to go  by the compass. Adjusting for the historical and cultural reality of Northern Ireland, this worked reasonably well, as follows:

In the Southeast (Co. Carlow, Co. Kilkenny, Co. Wexford, most of Co. Waterford. parts of ) –

In the South (parts of  Co. Tipperary Co. Waterford and Co. Cork,Co.) –

In the Southwest (Co. Kerry, parts of Co. Cork and Co. Limerick) –

In the West (Co. Mayo, the western parts of Co. Clare, Co. Galway and Co. Roscommon ) –

However, even these broad divisions seemed arbitrary to us, and left several places (notably Limerick City & Environs) in limbo.