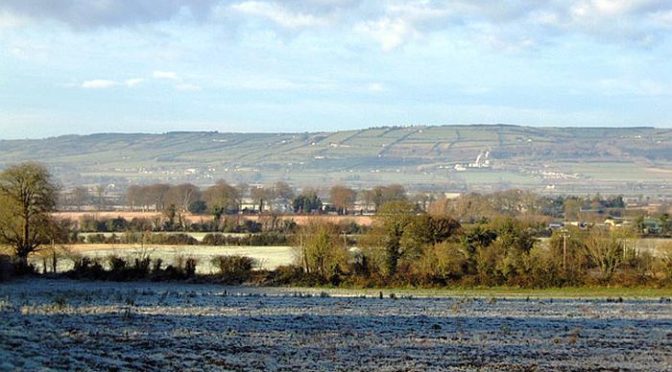 The Castlecomer Plateau, seen from a distance in the above photo by Alan Vaughn from the excellent website Ask About Ireland

This is an upland area in northern Co. Kilkenny, extending into Co. Laois and Co. Carlow at its northern edge, is one of the few places in Ireland with a coal-mining history (others are in Co. Roscommon and Co. Tyrone).

Nowadays a sort of forgotten no-man’s-land between Kilkenny City, Carlow Town and the Killeshin Hills, this rather bleak area was famous from the  C17th until the mid-C20th for its working anthracite coal mines.

The Plateau stretches from the Culla Hills eastwards to the Castlecomer Hills and the Slieve Margy range. These hills are divided by the valley of the River Dinin which flows through the town of Castlecomer itself to join the River Nore to the west. The eastern section is known as the Rossmore Plateau, after the village of Rossmore, which is located at the northeasternmost extremity near the highest point on the plateau (334m) and is just 5 km from Carlow Town in the River Barrow valley below.

The topography of the area has long made it difficult for agriculture, with lower temperatures, more exposure and heavier, wetter soils than the surrounding lowlands. This has greatly influenced its history: the plateau has always been sparsely populated, but has also provided a refuge for the dispossessed. Without coal there would have been little settlement.

Although outcrops of coal may have been worked as early as 1600, early C17th surveyors seem to have been initially more interested in the commercial possibilities of iron ore in the area.

In 1637 Lord Deputy Thomas Wentworth, 1st Earl of Strafford, granted the 30,000-acre (120 km²) Castlecomer estate to his cousin, Yorkshireman Sir Christopher Wandesforde (1592 – 1640), Master of the Rolls and Lord Chief Justice of Ireland, who succeeded him briefly as Lord Deputy. He later acquired the lands where Sir Cyprian Horsefield had extracted iron in 1647, and found evidence of several other such deposits in the area.

The first coal mine on the plateau was discovered virtually by chance. Sir Christopher Wandesforde, 2nd Bart, (later Baron Wandesforde and Viscount Castlecomer), owned an iron mine where, just as they were recovering the last of the ore in 1700, the miners struck a seam of coal. The word spread fast, and over the next half-century numerous mines sprang up all over the region and across the border in western County Tipperary.

By 1802, there were sixteen working pits in Castlecomer, each one producing twenty to thirty barrels of coal a day. In 1814, 70,000 tons of coal were mined in the Leinster Coalfields at £1.00 per ton. The majority of the coal was bought by local people, who used it as fuel for their hearth fires.

“Kilkenny coal” was acknowledged by geologists as the best quality anthracite in the British Isles, if not all Europe. It was very low in bitumen and sulphur, making it difficult to light, but it burned for a long time, producing intense heat and very little smoke –  important at a time when many humble dwellings had no chimneys. (Many jokes were made about “fire without smoke”).

The mining methods were very labour intensive, and casualty rates were high. Working conditions were appalling, with many miners maimed or killed in accidents and / or dying of pneumoconiosis and other lung diseases by the age of 50. It was not unusual for mine passages to collapse, as there were practically no safety measures in place other than timber props, though matters had improved considerably by the C20th. Unlike in Britain, neither women nor children were ever employed in the Kilkenny mines, there being no shortage of able-bodied young men (boys started at the age of 14).

The earliest mines were bell pits, in which shafts were dug 30 or 40 feet down and about 20 to 50 feet apart, and the coal was extracted as far as the miners could go by making tent or bell-shaped cavities. These were joined by underground tunnels to allow the easy movement of air. Columns of coal were left as supports; experienced “old miners” would sometimes risk their lives “stealing the pillars”. As soon as the ground around a pit became undermined, it was abandoned and another one opened. Some bell pit sites  were later excavated as opencast mines.

More sophisticated pits were built by miners from Durham in the 1820s, with shafts bored as deep as 300ft below the surface. Subterranean roads and tunnels were dug to access and transport the coal. Some of these tunnels were only two feet high, and grown men would have to wriggle their way underground in the heat and low visibility for hours at a time. “Wet pits” were continuously pumped to avoid flooding. and miners had to rely on rats to signal any danger from water.

In the early years miners would take down pieces of yellow clay into which they would fix small candles to show them the way. The candles were replaced by Carbide Lamps mounted on helmets, which in turn gave way to rechargeable battery lights.

Miners working long shifts of at least 7 hours, 6 days a week, used to lie on their sides in shorts and vests for hours to remove coal with hand picks, wedges and shovels. In some pits explosives came into use from 1830 onwards to break up the coal seams, but in others miners were still often required to work the old-fashioned way. Apart from some steam generators, electricity to power coal cutting machines, pumps, conveyors and haulage mechanisms was not generally in use until the mid- C20th.

The coal was gathered and brought to the surface in baskets, sleighs or wheeled boxes on rails, called “trams”; ponies were often used to pull these containers, and most main shafts were equipped with cranes of some sort.  On the surface the coal would be taken to “screens” to be graded as Cobbles, Nuts, Beans, Peas, Grains, Breakage and Duff.

The Swan, Wolfhill, Crettyard, and Newtown areas form the northern part of the Castlecomer Plateau. The main pits in the area were located at Modubeagh, Hollypark, Mullaghmore and Meeragh. The first pits were opened c.1740, and by 1845 the output from the Queen’s County Mines was valued at £78,000 with over 700 men employed.

Rossmore, further south, came into its own in the C20th. In the early years coal was distributed via Carlow railway station, and later big merchants would collect their own or have it delivered by the company’s two lorries that travelled the length and breadth of the country.

During WWII, with British supplies unavailable, the demand for Leinster coal increased; although fuel for domestic use was rationed, national “Gas Stations” used most of the large coal to generate power. Men came from as far away as Counties Roscommon, Mayo, Leitrim and Donegal to work in the coalmines, renting rooms from local families. Some stayed on and still live in the area.

The Castlecomer collieries in the C20th comprised the Deerpark (the largest opencast coalmines in Ireland), the Rock, the Jarrow, the Skehana and the Vera; the last was named after the eldest daughter of Capt. Richard Henry Prior-Wandesforde (1870 – 1956), known as Captain Dick, who sold land in Yorkshire to invest in improvements, including an aerial ropeway connecting the operations and (with British War Office subsidies) a local railway line for transporting both goods and passengers. The Wandesforde employees, numbering up to 1000, lived with their families in purpose-built accommodation on site, in Clogh, Moneenroe and nearby townlands, or in Castlecomer itself (in a quaint terrace of houses built for them on Kilkenny St). At peak production in the 1950’s, the pits were up to 700ft deep, with 11 miles of underground passages. 300 tons of coal a day were carried to a depot at Kilkenny station by regular trains (later replaced by lorries). However, geological “wash-outs” made the mines commercially untenable, and the last Wandesforde colliery finally closed with one week’s notice to its remaining 300 workers in 1969.

The collieries have left their mark on the landscape, but some former mining villages have vanished: of Bilboa, only the pretty Anglican church still exists, while not a trace remains of Moscow.

In order to develop the first mines, coalminers were brought with their families from England and Wales. Many of these immigrants were almost as oppressed as their peasant neighbours, and became “more Irish than the Irish themselves“.

Later, local small farmers gradually began to work in the mines to “top up” their income. At first they worked over-ground, but soon got enticed underground because the money was relatively good. Eventually almost every household in the area had at least one male menber working at the mines.

Although their role in the 1798 Rebellion was undistinguished, the miners’ communities produced Rockite agitators in the 1820s, Trade Union organisers and nationalist activists later in the century, and Republican volunteers during the Troubles.

A local historian, pointing to similar Industrial Revolution communities in Britain that came to be known as “Little Moscows”, has suggested that the early C20th miners in this area, amongst the first rural workers to be unionised, were perhaps the only proletarian community in the Irish midlands with a developed class consciousness, and that among them the early seeds of socialism may have germinated and flourished, with the 1917 Russian Revolution “filling them with hope of the dawning of a new age”.

Despite hindrance from both the State and the Roman Catholic church, Moneenroe miners sent their local communist agitator “Nixie” Boran as a delegate to the Red International Congress of Trade Unions in Moscow in 1929. He and fellow ITGWU members organised several strikes, with varying degrees of success. The Miners (Image – Ask About Ireland)

Most of the over 600 men who worked in the mines in the 1950s and 1960s are dead. Those that remain recall that health & safety safeguards amounted to little more than the statue of the Virgin Mary at the colliery gate, and are still fighting for some form of compensation for the damage done to their health.

Footprints in Coal is the name of a remarkably interesting permanent exhibition at Castlecomer Discovery Park on the history of coal mining in the area, including the 1864 discovery by miners of significant early amphibian fossils. The Discovery Park has a lot to offer if you are travelling through this atrea with children with zip lines, archery, canoeing and walking trails amongst the activities on offer.

In recent times the once barren land has proved excellently suited for forestry, and there are extensive plantations of Sitka spruce on the hillslopes.