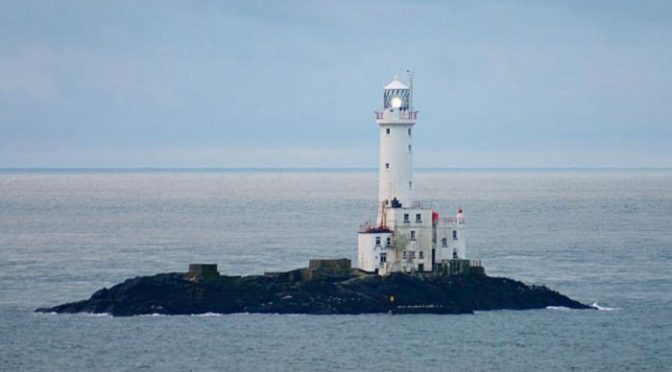 Co. Wexford is not famous for its islands; only birdwatchers and historians are likely to know anything about the Saltees & Keeraghs off the south coast. Nevertheless, the county can lay claim to one Ireland’s most important offshore outposts in the shape of the Tuskar Rock. The Saltee Islands, two large granite outcrops just off the south coast of Co. Wexford, give their name to Ireland’s most famous bird sanctuary. (Photo by Edd BC)

Imposing cliffs support eleven species of breeding seabirds in summer, while rocky outcrops offer sanctuary to seals and thousands of seabirds including a significant number of breeding cormorants.

Although landing is prohibited, a boat trip around the islands from Kilmore Quay affords excellent bird watching opportunities and views.

People lived on the islands as long ago as 3,500 to 2,000 BC. There is a recently-identified promontory fort, the remains of an ancient grave, an Ogham Stone (now in a local museum) and traces of what appear to be Ring Forts. Then there were early Christian hermits, Vikings and medieval monks. Small communities of farmers and fishermen eked a humble living there.

From the C16th onwards the Saltees were in the path of one of the world’s most important sea trading routes – between Britain and the American continent. The waters around the islands became known as “the graveyard of a thousand ships” so dangerous was the area to shipping.

Pirates from Spain, France, and North Africa plundered the busy merchant ships within sight of the islands, where there were smugglers bases, with cargoes of brandy and wine for the cellars of South Wexford being transhipped in their lee. The lyrics of P J McCall‘s well known sea ballad give a flavour of these adventurous times: Crew all from Bannow, Fethard and The Hook, Sailing in The Lowlands Low.

During the American War of Independence the great John Paul Jones pursued British shipping off south Wexford and took many prizes off the Saltees.

An island cave became a brief hiding place for two leaders of the 1798 Rebellion, when and John Henry Colclough and his wife of Ballyteigue Castle were joined by Harvey Bagenall. British soldiers tracked them down, and in order to save Mrs. Colclough (who had bravely stood by her husband throughout his battles), both men surrendered and, with the others, were executed on June 28th.

The self-styled Prince Michael Neill of the Saltees bought Great Saltee in 1943 and had himself crowned in a splendid ceremony in 1956. There were a number of controversies concerning his attempts to populate the island with cats to destroy some of the millions of rabbits and refusals to pay rates to Wexford County Council.

The tradition of flying the Prince of Saltee’s flag from the flagpole above the landing when the family are in residence has been renewed.

Little Saltee, according to local legend, was connected to the mainland and inhabited until the mid-C19th. Farmed until WWII, the island was known for early-season new potatoes, but corn and other vegetables were also grown. 12 people were needed at harvest time. A thresher was brought over, in parts, in small boats. The island was abandoned and overgrown until recently.

Since 1999, the owners have bred pedigree cows, sheep, and fallow deer. Soon there may be rare Soay sheep, from the Scottish island of same name, just south of Skye. The main house and some of its outbuildings have been made habitable. The courtyard has been tidied. There is a fine ruin of a two-storey barn and interesting remains of corn stands in the yard immediately west of the main building.

The ruin on the larger island was built in 1800 for survivors of shipwrecks, but is now very dilapidated.

In February 1914 The Mexico, a Norwegian barque, ran aground in stormy seas. The Fethard lifeboat was launched, but both vessels wer smashed to pieces by mighty waves. Nine of the 14 crew were swept to their deaths; the remaining five joined the eight surviving sailors  on the exposed reef , where they remained miserably  clinging to rocks while the storm continued unabated.

Several attempts to rescue them were foiled before two brave men, Bill Duggan and Jim Wickham of the Rosslare Fort lifeboat, took a dinghy and ferried the survivors two at a time from their ice cold rocks. The operation needed 6 trips in stormy seas to bring all to safety, but on the second of these, the dinghy was holed. For the remaining trips the sea was kept out by a loaf of bread wrapped in oilskins, plugged into the opening.

“The thunder roared, the lightning flashed, the seas like mountains ran,
But onward ‘mid that tempestuous storm the lifeboat proudly came.
The signal which she flashed that night was the white o’er the green in view:
The signal which a sailor reads: ‘I will not abandon you’.
As she neared the ill fated Mexico, oh heavens what a shock,
Their boat was dashed to pieces on the dreaded Keeragh Rock.
Oh God what a sensation, to behold those heroes brave,
Contending with the raging seas, their precious lives to save.
The crew of the gallant Mexico, though terror stricken too,
They rendered all assistance to the drowning lifeboat crew.
Five of those gallant heroes were all that could be found.
The other nine, by the Keeragh Rock, I’m sorry to say were drowned.
May God have mercy upon their souls, who gave their noble lives,
And heaven guard the helpless ones those heroes left behind.”

Tuskar Rock (Top image with lighthouse), located seven miles off Carnsore Point in Co. Wexford, on the direct route from America to Liverpool, was a major hazard to mariners in the days of sail; the wrecks in this vicinity are said to lie two and three deep.

Tuskar Light was constructed in 1815, with 11 men losing their lives during construction. 10 were drowned when an October storm swept them away, leaving a further 14 hanging onto the rock for 3 days, one of whom died of his injuries later. It was also a dangerous place to be during WWII, a light-keeper lost his life and a second was injured when a drifting mine exploded against the rock. The lighthouse was fully automated in 1993.

Lord Randolph Churchill, on a yachting cruise in 1886, famously landed and enjoyed a liquid repast with the lighthouse men. His subsequent complaints about their living conditions led to the rehousing of their families in purpose-built accommodation on Slaney St. in Wexford Town.

Although the investigation into the crash lasted two years, a cause was never determined. Theories have included corrosion, a British experimental missile, metal fatigue, a mid-air collision with a French-built military aircraft that was training with the Irish Air Corps, a UFO, or a bird strike, with the most likely cause officially regarded as “a flutter-induced fatigue failure of the elevator trim tab operating mechanism”.