Ireland was part of the United Kingdom of Great Britain & Ireland until 1921, when the island was partitioned, with 26 counties secceeding from the UK to become the Irish Free State, now the Republic of Ireland, and the northeastern six counties gaining autonomy within the UK as Northern Ireland. The frontier between the two political entities,  drawn by a joint commission, has been known ever since as The Border. 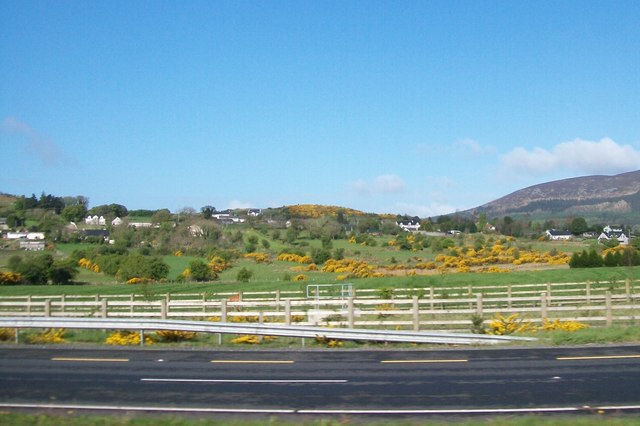 The Border sometimes takes the form of a fence, as here just south of Faughill Mountain in County Armagh. During the late C20th Troubles, a British Army observation post on the summit dominated the area between Cloghore and Dundalk in County Louth. (Photo by Eric Jones)

The Border is undoubtedly the most important and traumatic division in Ireland’s history; however, it was by no means the first or only one, as the island has a long tradition of divided kingdoms and rebellious territories. The current boundaries between Provinces and Counties are loosely based on ancient or medieval frontiers, of little real relevance today other than to delimit more or less convenient administrative units.

The territorial divisions of Gaelic (and Norse) Ireland are reflected only in a poor and distorted fashion by more modern administrative units. Because ancient regional entities can still have cultural relevance, attention is drawn to them wherever appropriate.

Politically, Gaelic Ireland was organized into about 150 tuatha, petty kingdoms identified by their ruling clans or septs, and each quite independent under its elected clan chief. Groups of tuatha tended to combine, often with reference to common origins and ancient loyalties, but the king who claimed overlordship in each group had a primacy of honour rather than of jurisdiction.

Around the beginning of the Christian era, the island came to be divided into five groups of tuatha, known as the Cuíg Cuígí (Five Fifths), These were loosely federated Kingdoms with somewhat flexible boundaries, and over the centuries underwent significant changes. They were Ulaidh (Ulster) in the North, Connacht in the West, Mumhain (Munster) in the South West. Laighin (Leinster), in the South East, and Midhe (Meath), corresponding to the present-day counties of Meath, Westmeath, Longford, Offaly and south County Louth in present-day Leinster (North County Louth was considered to be part of Ulster). The Cuigí were dubbed ‘provinces’ by later record-makers, in imitation of the Roman Empire’s provinciae.

The first Norman invaders staked claims to lordships of vast tracts of land on various pretexts, naturally usuing or adapting existing toponyms. Since the invasion was a seigniorial enterprise rather than in the name of the Crown, King Henry II was careful to make only a few modifications, and imposed virtually no restrictions on the exercise of sovereign power by Strongbow (in Leinster), Hugh de Lacy (in Mide) and John de Courcy (in eastern Ulster). They and their sons distributed land to their followers, whose tenures thus did not, at least at first, depend on the Crown for legitimacy.

At the same time as Ireland’s counties were beginning to evolve, much of eastern and central Ireland was covered with a patchwork of Anglo-Norman lordships known as Liberties, privately governed jurisdictions where Seneschals administered justice in the name of their feudal overlords, without reference to the Crown.

However, in 1197 Prince John as Lord of Ireland had seized the temporalities of the See of Leighlin, thereby asserting non-spiritual sovereignty over church lands within the Liberties. As King, he restored the Liberty of Ulster with a reservation of four “royal pleas” (rape, arson, treasure trove and forestall) to the royal courts, to which any claim could be moved from a liberty court by writ of right. This precedent was applied to all the Anglo-Norman lordships, effectively making the liberty courts extensions of the royal system of justice. Seneschals had to swear loyalty to the King in the same way as royal sherriffs, and were likewise subject to fines and liable for debts due to the Crown. Instead of Royal officials, Chancellors and Treasurers were appointed, and in at least one case the word Justice was used.

Some Henrician Liberties (Kildare, Kilkenny and Carlow) were converted into Royal Counties, while others came to be shired in the course of events. The most powerful feudal lords were compensated with Palatinate Jurisdiction.

Palatinates were ruled under royal authority by a count palatine, usually an Earl or Duke, originally as direct representatives of the sovereign, but later on a hereditary basis. The term is derived from the centremost of the seven hills of Rome, the Mons Palatinus / Palatine Hill overlooking the forum, which is the etymological source of the Latin word palatio and its cognates in other languages, and means “of the palace”. Palatinates were most common in Europe from late Roman times until the fall of the Carolingian regime.

(The English Palatinates were the Duchies of Cornwall and Lancaster and the the Counties Palatine of Lancashire, Cheshire and Durham (ruled by a prince-bishop until the late C18th). At various times in history the following areas had Palatinate status: Shropshire, Kent, the Isle of Ely, Hexhamshire in Northumberland, and, in Wales, the Earldom of Pembroke (until 1535). In Scotland, the earldom of Strathearn was identified as a county palatine in the C14th, although there is little indication that its status differed in practice from other Scottish earldoms. In the North American colonies, the historic Province of Avalon in Newfoundland was granted Palatine status, as was Maryland under Cecilius Calvert, 2nd Baron Baltimore.)

In Ireland, the Palatinate of Meath came into being shortly after the Norman invasion, when Hugh de Lacy made ten of his henchmen barons, but lasted only until 1210, when his sons Hugh and Walter de Lacy were stripped of their titles and lands by King John; the County Palatine of Tipperary was ruled by the Earls of Ormond and later Dukes of Ormonde until 1716; the County Palatine of Kerry, abolished in 1606, was administered by the Geraldine cousins the (Green) Knights of Kerry, (Black) Knights of Glin and (White) Knights of the Valley (FitsGibbons) in the name of the FitzGerald Earls of Desmond.

There were also Palatinates in Poland and in Germany, where the Palatine Princes were Electors of the Holy Roman Empire.

Protestant refugees from the Rhine Palatinate sought refuge in Ireland in the late C17th, forming another strand in the island’s cultural heritage. The words Palatine and Palatinate in the Irish context more often refer to these continental immigrants.

The first Normans in Ireland came from Wales, where there was a system of dividing land into Cantrefs / Cantreds, and this term was initially applied to the Gaelic tuatha, then extended to what later became baronies. They were administered by searjants and coroners. The term gradually died out and was obsolete by the the time of Queen Elizabeth I.

Church administrative areas often correspond to secular entities at the time they were made, which in many cases was about 1,500 years ago.

The Roman Catholic authorities have adjusted the borders of these areas more often than their Protestant counterparts, so that, apart from consolidations, the Church of Ireland’s dioceses and parishes better reflect the ancient communities for which they were originally named.

The Church of Ireland’s parishes were also used until the end of the C19th as Civil Parishes.