The Irish toponym derives from Cill an Disirt Morthuile (“church of the hermitage of the swollen waters” or “church of the deserted place of the big / high tide(s)”) because the first church was erected above the high-water mark rather than on the hill above it. The parish was historically referred to as Disertmurtuile / Disert Murthaile (c.1284), Disert Murthill (1302), Desert Morehely (1584) and sometimes Tuath-Na-Fearna (“territory of the alder trees”).

The 1703 Moland Report stated “Kildizert is distant from Lymerick 25 miles and 10 from Ennis, has on it ye ruins of an old church and several cabins.” Lewis (1837) put the local population at just over 4500. Pigs, corn, butter and agricultural produce were sent to Limerick in boats; and building material, groceries and other essentials were brought in by return. Later in the century, a steamboat passed daily on the way to or from Limerick. In the early 1900s tradesfolk in the village included millers, blacksmiths, shoemakers, saddlers, nailmakers, tailors, dressmakers and milliners.

The local Munster Bank branch was the scene of a riot in July 1885 as depositors anxious to retrieve their savings stormed the building following press revelations that directors of the 21-year-old institution had made unsecured loans, borrowed illegally and squandered assets in speculative ventures. One senior manager, George Farquharson, absconded with cash and gold worth over 85,000 pounds; despite subsequent sightings as far apart as Norway and the USA, he was never caught, and nobody went to jail. (Sounds familiar!) The depositors eventually got most of their money back when the defunct bank’s operations were taken over by the newly created Munster & Leinster Bank which, in turn, was eventually absorbed into what became AIB.

The old parish church, long in ruins, resembles a monastery more than the usual types of church in County Clare, and it is very regrettable that its origin is forgotten. The east window is late Gothic in style. A residence for the priest opens into the church by a low pointed arch. At the west end there is a neat square belfry tower with stepped battlements, struck by lightning in 1826. Buried here under a white marble Celtic cross is Frances Marcella O’Brien (1840-1883), aka Attie O’Brien, the writer of Won By Worth and From Dawn To Darkness.

St Michaels church (RC) was completed in 1831 on the site of an old thatched church.

A monument commemorates Peadar Clancy: born nearby in 1894, he was amongst those arrested for his part in the 1916 Easter Rebellion in Dublin and sentenced to death, later commuted to penal servitude for ten years, and was released under the 1917 amnesty. He staged prison escapes for many of his comrades, only to be captured and killed in November 1920 in Dublin.

Crovraghan Castle, owned by Teige Mac Conor O’Brien in 1580, was attacked and burned by insurgents during the 1641 Insurrection and finally levelled in 1893.

There are three Holy Wells in the parish, Tobar Brecain at Crovraghan, Tobar Ruadhan at Cooga and one at Lacknashannagh dedicated to the BVM. The latter was a popular place of worship right up to modern times, particularly on 15th August each year.

Sometimes marketed as “The Fisherman’s Haven”, Kildysart is famed for the excellent angling resources nearby, in both the estuaries and in the neighbouring Lakes Gortglass, Ballylean, Clonshnacta and Effirnan (membership of the local angling club is required to fish for trout).

Cahircon / Cahercon Pier is a good spot to catch conger, skate, greater and lesser dogfish, pollock, thorn back ray, flounder and tope, among others. Bait in the form of peeler crab and lugworm is available in good quantity in the area. Boats can be chartered for river fishing or for trips to the many islands that lie off the coast.

Cahiracon House saw an encampment formed in its deer-park c.1780 when an East India fleet took refuge in the River Shannon estuary.

In 1837 it was the seat of Bindon Scott, whose family were popular landlords. In 1876 it was acquired by Lord Annaly, better known locally as Colonel White, who “brought water over a hill” from Effernan Lake by siphon to supply his domestic needs. He also built the billiard-room in expectation of a visit from the Prince of Wales, later King Edward VIII.

The C18th building was the residence of the Vandeleur family in the late 1890s, after Kilrush House had burned down.

The Society of St Columban, aka the Maynooth Mission to China, bought the property in 1920. They in turn sold it to the Salesian Sisters of St John Bosco, who use it as a convent and school.

Most of the islands in the River Fergus estuary are in the parish of Kildysart.

The Kildysart Cultural Festival (formerly the Banner Rose Festival) has gone from strength to strength each year.

Labasheeda (Leaba Shioda – “bed of silk”), is an attractive little village set beside a shallow bay of the same name on a peninsula on the north side of the River Shannon estuary. Also known historically as Poundstreet, it is surrouounded by sweeping fields commanding spectacular views across the water to County Limerick, about three miles away, and on clear days the church bell of Glin can be heard ringing.

The story explaining the toponym goes that three ships on their way to Limerick were caught in a fierce storm; one took shelter in the bay while the others continued on their course, but were eventually forced to anchor in one of the bays further up the river, where they were buffeted about and suffered great damage to their masts and rigging. After the storm, as the first ship continued on its way to Limerick, the Captain encountered the other two ships stranded and unable to proceed. Coming to their assistance, he expressed surprise that the storm should have done them such damage, and when the others questioned him on how he had managed to escape harm, he replied, “Oh, I slept as soundly all through the storm as if I were in a bed of silk“. 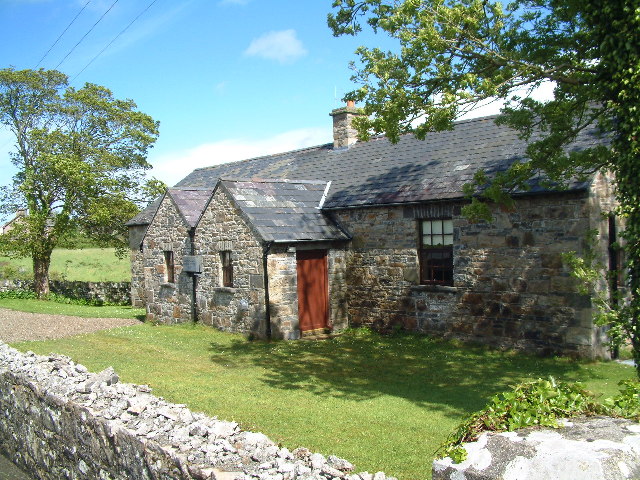 The Old School House (1887) is now a Bórd Failte approved 4-star self-catering cottage.  (Photo by Charles W Glynn) A history of the school can be read here.

The Kilkerrin Battery Fortress is one of seven such structures built between 1811 and 1814 to defend the River Shannon estuary against a feared French invasion.

Kilmurry McMahon (Cill Mhuire Mhic Mhathúna) is the name of a scattered hamlet and parish.

Saint Mary’s church is a C15th edifice with a number of old flat headstones, and also has some vaults.

Clonderlaw House, residence of the Studdert family from c. 1746 to 1951, is a derelict building of considerable architectural and historical interest on the verge of Clonderlaw Bay. (Sketch by Paul Markham, who mantains an interesting website at www.markhams-of-derryguiha.com)

Knock (An Cnoc – “the hill”) is a charming little village with a bridge and a pier jutting out into Clonderlaw Bay on the north side of the River Shannon estuary.