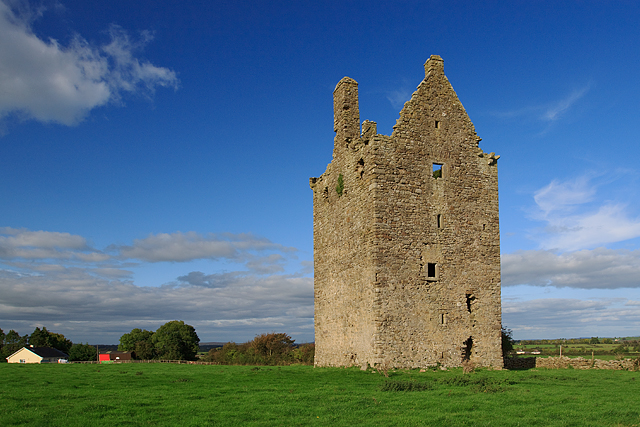 The territory was long dominated by the O’Ryan sept, while the immediate district was under MacEgan control. The name Toomevara is said to be a composite commemoration of Saint Thome Donain, a C7th monk from Roscrea who established a monastery here, and the O’Meara family from Waterford, who were granted land locally in the C14th by the Butlers of Ormond.

The C16th heiress Annie O’Meara married the notorious Archbishop of Cashel, Miler Magrath, who bestowed her nearby castles of Blane and Ballymackey on two of his sons.

Toomevara was a stopping point on The O’Sullivan Beara‘s Long Walk from West Cork to Leitrim in January 1603.

The Square in the village contains the ruins of a medieval Augustinian foundation of which little is known. The remains include a very fine church entrance. There are several interesting graves in and around the ruins. A C7th / C8th  slab bearing the Chi-Rho symbol, one of the earliest used by Christians and the oldest known monogram of Jesus Christ, dating back to the C2nd, was discovered and photographed in 1952 but has been missing since 1953.

St Joseph’s church (RC), erected in 1809, is the first of four churches in Toomevara parish, all dedicated to the same saint, all built before 1830, almost certainly by the same contractor.

Annameadle parish church (CoI), named for the medieval and subsequent CoI / Civil parish of Annameadal / Aghnameadle / Aghnamadle /  Athenemedele (Ai / Ath na meadal -“ford of the medals”), was constructed c.1825 with funds from the Board of First Fruits. Occupying a prominent position on the Main Street, the now disused edifice has attained almost emblematic status.

Accordng to Lewis (1837), Toomevara had a population of 3577 inhabitants before the Great Famine.

The ‘Sack of Toomevara’ took place on 2nd June 2nd 1849, towards the end of the Great Famine. 567 individuals,  all of them tenants of the Revd Massey Dawson, were evicted from their homes. and watched their dwellings being levelled by battering ram. Most were accommodated in a temporary workhouse in Grawn Hill, the remainder in the grounds of St Joseph’s church, occupying frail shanties that were in turn torn down by the bailiffs and the inhabitants scattered, many to die by the roadside.

The ruins of the medieval church of Aghnameadle are overlooked by a cemetery near a stretch of the Ollatrim River spanned by the three-arched stone Aughnameadle Bridge. The atmospheric graveyard is dominated by the stone-roofed vault of a branch of the MacEgan family, the remnants of whose castle / court, long a famous medieval school of learning, stand nearby.

Clash is the location of an interesting old double-arched stone bridge across the Ollatrim River. This is a good place to spot trout.

Ballinaclough, beside a bridge across the River Nenagh, was the location of the Manor of Weyperous (Gue Pierreux) granted by Theobald Walter to the de Mariscos in the early C13th.

The deserted medieval settlement is still dominated by the remains of their Castle (motte, fragment of great hall, etc.), later an important O’Kennedy stronghold during the C15th Gaelic revival.

The squat-towered medieval church has a Sheela-na-gig on one wall.

The parish church of Our Lady of the Wayside (RC), a small pebbledashed T-shaped building, was erected in 1830 and extensively renovated in 1985.

Bayly Farm, the family home of Hamilton’s bride, was where the newlyweds spent their honeymoon while the great physicist worked on the third supplement to his Theory of Systems of Rays (1832), a treatise on optics. The original early C19th farmhouse, set in delightful grounds with a long circular walk, is now run by Desmond and Jacqueline Bayly as a welcoming B&B.

Dolla and Silvermines are two small communites on the northern flanks of the Silvermines Mountains.

Dolla village, basically comprising a friendly pub and a shop, is frequently shrouded in fog.

Kilboy House, just outside Dolla, was built in the late C18th by William Leeson for Henry Prittie, 1st Baron Dunalley. The building was torched by IRA arsonists in 1922, during the Civil War, but subsequently restored, and the Dunalleys continued to reside there until about 1960, when they left the area and lived in Dublin for some time before departing for London. The estate was later bought by Ryanair founder Tony Ryan and is now run as a successful stud farm by his son Shane.

Kilboy church is a C15th edifice, partially restored in 1987.

Dolla is linked by a scenic stretch of the R497 to Curreny on ByRoute 8.

The Silvermines area is an ecological disaster zone; many centuries of mining have left the watercourses and the land impregnated with heavy metals. It is also a surprisingly beautiful place with an interesting and complex history.

Mining is said to have been carried out as far back as the late Iron Age (the Roman era on much of the European Continent), and the Danes are believed to have exploited the local mineral resources in the C9th. King John commissioned Genoese miners to extract silver in the C13th. The area was continuously worked from the C16th until the end of the C20th for silver, lead, zinc, copper and barytes. The C19th workings comprised a group of mines called Shallee, Gorteenadiha, Garryard, Cortshanneroe, Knockanroe, Ballygowan and Cooleen.

The old shafts leading to the underground passages have been (sometimes rather inadequately) fenced off, but evidence of the former industry abounds in the form of overgrown quarries, opencast and drift mines, tailing dams, spoil heaps, waste deposits and drum dumps, plus derelict surface structures such as Cornish engine houses, laboratories and storage edifices for core samples, machinery and equipment. Local water supples are still polluted, with several incidents of animal lead poisining over the years. Several projects are afoot to rehabilitate the zone, and there has also been a proposal to develop the Shallee mine for tourism; however, visitors should exercise EXTREME CAUTION when exploring. 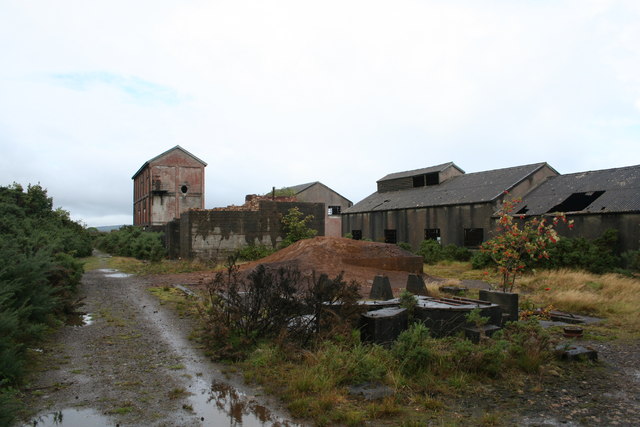 The church of Our Lady of Lourdes (RC) is a prominent mid-C20th concrete edifice built on the site of a former Protestant church, demolished in the 1950s (when offered the site, the RC parish priest is said to have exclaimed “we’ll move quickly before they change their minds!” In fact the modern church was not built until 1975).

Silvermines Cuan Muire is a garden on the site of the old RC parish church, accessed by solid C19th cast iron gates, with several fonts from the old building and a wrought iron pergola in the middle.

The Miner is a metal sculpture erected in 2001 by members of the local community in recognition of the area’s industrial heritage.

A Wildlife Walk has been developed, with signposted flora and habitat areas.

The Silvermines viewing area, about a mile from the village, commands spectacular views over Lough Derg and beyond.

Birdhill (Cnocán an Éin Fhinn – “hill of the fair bird” ), a pretty village overlooking the River Shannon, with several substantial Georgian houses in the vicinity, has won several prestigious awards in recent years .

The toponym derives from a legendary encounter between Oisin of the Fianna and a huge bird; some versions also involve Saint Patrick.

Matt the Thresher is a famous country pub & restaurant named after a character in Charles Kickham‘s sentimental 1887 novel Knocknagow, long one of the most popular books of fiction in Ireland.

Montpellier is the location of a road bridge spanning the River Shannon between Co. Limerick and Co. Clare.