Lyons Hill (Cnoch Liamhna – “Hill of the Elm”) is a western suburb of DUBLIN. 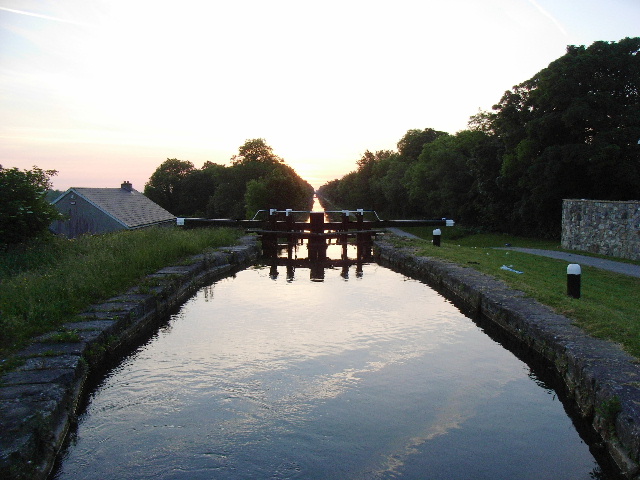 The 13th Lock on the Grand Canal (Lyons Hill / Clonaughles) is said to be haunted, perhaps by ghosts from Clonaghlis graveyard nearby.(Photo by JP)

Cnoch Liamhna was the inauguration site for the Uí Dúnchada, one of three Uí Dúnlainge septs who more or less amicably swapped the kingship of Leinster between 750 AD and 1050. The family adapted to the late C12th arrival of the Normans, and continued to wield power as the FitzDermots, although the important manor of Lewan / Leuan / Lyons passed  in the early 1200s to the Tyrrells and in 1271 to the Aylmers; members of both families  played important roles in Irish history over the next four centuries.

Lyons Castle was mentioned in the 1332 Book of Howth, not long after it was burned by the O’Tooles. It was used as a base by Sir William Brereton in his 1535 campaign against Silken Thomas, and sacked during the 1641 Irish Rebellion by government troops, who also destroyed the village. Michael Aylmer inherited the castle and demesne at the age of four in 1733, and was forced by debt to mortgage it to Dublin bankers, who eventually foreclosed.

Lyons church (c.1350) has intricate carvings and a stone commemorating the marriage of Richard Aylmer to Eleanor Tyrrell in 1548, as well as a later Lawless family mausoleum.

Construction of the Grand Canal began in 1756. The 13th Lock (Lyons Hill / Clonaughles) opened in 1763, and Barry’s Hotel , as the nearest overnight stop to Dublin, thrived for almost a century. Records show that this lock was reduced in size in 1783, but the canal at this point is still 20ft / 6.1m wide, in accordance with the ambitious design of the first engineer, Thomas Omer, compared with the 14ft / 4.3m width adopted when John Trail took over in 1768, reducing the proposed canal capacity from 170-ton barges to 40-ton barges.

The average speed of boats on the canal was 3mph; the introduction of Fly Boats in 1834 raised it to 9mph. The number of passengers peaked at 120,615 in 1846, the year the Dublin – Cork railway line was constructed. The Dublin – Galway raiway began operations in 1850, and in 1852 the rarely profitable passenger service on the canal ended.

Valentine Lawless, 2nd Baron Cloncurry, was impressed by the French Revolution and as a Trinity College student became an active member of the United Irishmen. Imprisoned more than once, he is said to have financed both the 1798 Rebellion and his cousin Robert Emmet‘s revolt of 1803, and was to have been a member of the revolutionary Irish government. He served as chairman of the Grand Canal Company five times and envisaged its extension to the Atlantic, thus “employing 30,00 spades instead of bayonets“. He constructed the Lyons Mill (later owned by the Shackleton family) and lockyard complex.

He had the house substantially rebuilt and refurbished between 1803 and 1810 in the French Directoire style (of which there are very few examples in Ireland) with three ship loads of classical art imported from Italy, including marble portico columns from the ruins of Nero’s “Golden House” in Rome and a statue of Venus excavated at Ostia. A fourth shipment was lost when it sank off the Wicklow coast. Walls and ceilings were decorated by Gaspare Gabrielli-

The Italian stuccoist’s scaffold-height observations of in flagrante conduct provided vital evidence in Lord Cloncurry’s spectacular 1807 Criminal Conversation proceedings against  Sir John Piers of Tristernagh, who had  seduced the young Lady Elizabeth (née Morgan) “for a wager“;  divorce followed in1811. (The wicked baronet’s subsequently 1815 Isle of Man marriage to actress Elizabeth Denny was recognized in an important 1849 House of Lords appeal case regarding succession).

Lyons House was the birthplace and childhood home of Emily Lawless (1845 – 1913), a popular poet and author of romantic and historical novels.

Mary Lawless famously supported the strikers during the 1913 Dublin Lockout; she begged her father for a cow to provide milk for their families, and he granted her request on condition that she personally conduct it to Liberty Hall, which she did.

John Betjeman, later the British Poet Laureate, visited more than once; he published  an early poem on the notorious Piers case in 1938 in the Westmeath Examiner (under the pseudonym Epsilon) and based his Ode to a Lake on his 1958 stay at Lyons.

The property, sold in 1962 as an agricultural campus to UCD (very poor conservationists), was purchased in 1990 by Michael Smurfit, and in 1996 resold to Ryanair founder Tony Ryan (d. 2007), who undertook extensive restoration and renovation works and is  buried in the graveyard by the remnants of the old Clonaghlis parish church (pre-1206) on the estate.

With the reduction of the Grand Canal‘s importance and the accidental burning of the mill in 1903, the area went into decline and the canalside buildings were allowed to fall into disrepair.

Lyons Village is the renovated former lockyard complex, revitalised with the conversion of early C19th industrial buildings into fashionable apartments and the restoration of artisan dwellings. It is now an exclusive upmarket residential community with a good restaurant, La Serre.

Tipperstown was called after the local Tipper family of landlords, whose two castles were burned by government troops during the 1641 Irish Rebellion.

Ardclough (Ard Cloch – “High stone”, possibly from Ard Clochar, perhaps a reference to the convent of Oughter Ard) (pop. 300) is a small village that has given its name to a large surrounding area, including Lyon’s Hill, at least for postal address purposes.

The Ardclough Sedition Case was a cause celebre in 1917 when, as a result of complaints from Unionists, a local National School teacher was threatened with prosecution by the Dublin Castle authorities for anti-British bias in history lessons, teaching “Nationalist” poems by Emily Lawless and “seditious” songs  by Thomas Davis and Peader Kearney, and expressing the hope that her pupils would grow up to fight for the Irish Republic. No proceedings were in fact initiated.

Ardclough is best known in racing circles for “the four horses of the Ardcloughalypse” – The Tetrarch (b.1911, regarded as probably the finest two year old in Irish racing history, confirmed in 1919 as the most succesful sire in the world), Captain Christy (1974 Cheltenham Gold Cup winner), Star Appeal (1975 Prix de L’Arc de Triomphe winner) and Kicking King (2005 Cheltenham Gold Cup winner). The area is home to several famous studs and training establishments, and quite a few successful jockeys were born locally.

The Battle of Gleann Máma, where Brian Boru defeated the combined armies of the kings of Leinster and Dublin, Máel Mórda and Sitric Silkenbeard, in 999 AD, is believed to have taken place just east of the hill of Oughter Ard.

Oughter Ard / Oughterard (Uachtar Árd – “the upper height”) is a well-maintained hilltop complex of medieval ecclesiastical ruins and graves on the site of a convent founded c.600 AD by Saint Briga (not to be confused with Saint Bridget), burned by the Norsemen of Dublin in 995 AD and  by the Manx king Godfred Crovan a hundred years later.

Two centuries later it formed part of the dowry of Dermot McMurrough‘s daughter Eva on her marriage to Strongbow, who granted it to Adam de Hereford, who in turn bestowed the land of ‘Wochtred’ on St Thomas’ Abbey in Dublin; a 1303 Papal taxation roll listed it as ‘Outherard’.

Oughter Ard’s Round Tower is not mentioned in any records before 1792, when the 34ft-high stump was much as it appears today.

The ruined church is now believed to date from c.1350 and not 1609, as previously thought. It is not clear when it fell into disuse. It has a partially intact vaulted ceiling and a separate staircase leading to the roof. Access to the remaining interior is through one of the windows, as both doorways are blocked by funerary monuments.

The church and cemetery contain a number of interesting tombs and memorials:

The Wolfe mausoleum (1650) is where Lord Kilwarden, the Chief Justice murdered by a Dublin street mob during Robert Emmet‘s abortive rebellion, was interred in 1803.

Arthur Guinness was buried earlier in the same year in the Read family plot beside his maternal grandfather William, a local farmer who used to sell home-brewed ale by the roadside to troops en route to the battles in the Williamite War.

Also commemorated is James Phipps, “A Captain of Insurgents” who took part in the Battle of Ovidstown in the 1798 Rebellion before moving to America, where he died in 1826.

There are several graves of the Ponsonbys of Bishopscourt, and a later one dedicated to William Kennedy of the same address, who was posthumously decorated for bravery in the Battle of the Bulge during WWII.

Oughterard Castle, a rectangular tower with four floors, is set into the side of a ridge with excellent views of the Wicklow Mountains. No documentary references to this castle are known before 1636, although it is clearly older; and was probably an important Norman manor.  Like most other castles in the area, it was sacked by government troops during the 1641 Irish Rebellion.

On 1st February 1815 Daniel O’Connell famously fought a duel in an adjoining field with John D’Esterre, who died as a result of his wounds.

Castlewarden was also part of the land given by Adam de Hereford to St Thomas’ Abbey in Dublin; a C13th abbot was called Warinus, and the name Castlewarden is believed to have derived from Castellum Warin. The castle, in good repair until the early C17th, was burned down by government troops during the 1641 Rebellion, while a medieval church is thought to have been vacated by the end of the C16th, and disappeared sometime over the next century.

Castlewarden House is now the home of Castlewarden Golf Club, whose 18-hole course encompasses an ancient rectagular enclosure, a medieval earthworks and a motte & bailey, all listed National Monuments

The 1983 discovery by archaeologists of  a flint dated to 4800-3600 BC provided the earliest evidence of human habitation in the region.