Glin is an attractive village on the south bank of the Shannon Estuary, nearly 3m wide at this point. Glin Castle, a crenellated C18th mansion, is a very impressive pile. The reception rooms are truly remarkable, featuring a most unusual flying staircase, and the grounds rival Eden; the walled garden is particularly delightful, with a headless statue of Andromeda presiding over vegetables, fruit, chickens and bees. Until recently the castle was run as a luxurious seasonal hotel with an Irish Country House style restaurant that received superb reviews, but is currently available only for group bookings.

The Knight of Glin

The Knight of Glin / the Black Knight is the title of a cadet branch of the FitzGeralds of Desmond, who have remained in virtually uninterrupted possession of the manor for over 700 years.

In 1923 a mob of exhalred dissident Republicans intending to torch the property was confronted by the then knight in his wheelchair, roaring “you’ll have to burn me with it, boys!“. They melted away into the night shadows.

The last holder of the title, Desmond FitxGerald, 29th Knight of Glin, died without male heir in September 2011. A Harvard graduate (MFA) and expert in Fine Art, he was closely associated with the Irish Georgian Society, which has done sterling work in defending Ireland’s architectural heritage. His widow and daughter are top gardening authorities. 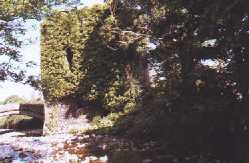 The old Castle of Glin beside the river, now in ruins, was besieged several times during the Desmond Rebellions, notably in July 1600, during the uprising of the Sugan Earl of Desmond. According to one legend, during an attack on the castle by one of Queen Elizabeth I‘s ships, the captain managed to capture one of the then Knight’s sons and sent his father a message that unless he surrendered the boy would be put in one of the ship’s cannons and fired against the castle wall. The Knight replied that as he was virile and his wife was strong, it would be easy to produce another son. (Photo – Limerick Diocese)

Hamilton’s Tower, overlooking the pier, is a C19th structure built by a Captain Hamilton, who used to fire  a cannon on top to salute Royal Navy ships passing up and down the River Shannon.

The Glin Heritage Centre, housed in a restored church, is an interesting amenity.

Athea (Áth an tSléibhe) formerly aka Templeathea) (pop 2100) is a small crossroads town on the River Galey (pronounced locally as “Gale”) at the foot of Dromada Mountain (Drom fhada – “Long Ridge”), the site of a wind farm project. 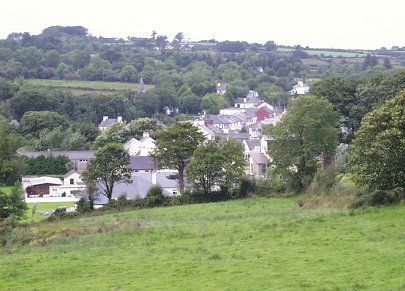 The main street is named after Con Colbert (the youngest man to be executed after the 1916 Easter Rising). The Con Colbert Memorial Hall is the community centre and venue for most local events.

St. Bartholomew’s church (RC) was built in 1832; the attractive interior features some fine stained glass windows. Its spire can be seen from all approach roads.

Templeathea graveyard dates from the C18th, and contains the grave of David Quaid, who served with The Royal Munster Fusiliers throughout the Boer War and under Lord Kitchener in India. The cemetery is reached by a landscaped walk called The Giant’s Garden, a reference to a local legend about a giant carrying his deceased mother on his shoulders to be buried.

The memorial cross on the village fringe was erected in 1863 by the “sorrowing and grateful tenantry” in honour of Thomas F. Goold, only son of Archdeacon Goold, whose father  (also called Thomas)  had bought the Dromada estate in 1817 from Lord Courtenay and in 1846 died at Lissadell, County Sligo, the home of his daughter Caroline‘s husband Sir Ralph Gore Booth.

The Gables is a pleasant pub & restaurant that offers reasonably priced B&B accommodation.

Portrinard / Port / Purt Castle, a former Geraldine stronghold, lies on the bank of the River Feale.

Abbeyfeale (Mainistir na Féile – “Monastery on the Feale”) (pop. 2000) is a market town on the banks of the River Feale in the foothills of the Mullaghareirk Mountains.

A Cistercian abbey founded here by Brian O’Brien in 1188 was annexed to Monasteranenagh. The monastery survived till 1580, when it was sacked by Sir William Pelham‘s troops, based in the nearby C14th Geraldine castle of Port Rinard / Portrinard (now an overgrown stump) as they harried the remnants of the Earl of Desmond‘s rebel army.

The Town Square is dominated by a statue of Fr William Casey, who led a Land League campaign to help tenant farmers fight against their landlords. The local GAA football team is named in his honour.

The busy and attractive main street has several good pubs; the district contains no less than 30 bars.

The old railway line has been paved over to create a pleasant walking route.

There is an atmospheric old Protestant graveyard at Kilkinlea.