Adare (Ath Dara – “Ford of Oak”), a village  with a fine 14-arch bridge spanning the River Maigue, was largely designed in accordance with the architectural precepts of the C19th “improving” landlords, the Earls of Dunraven. 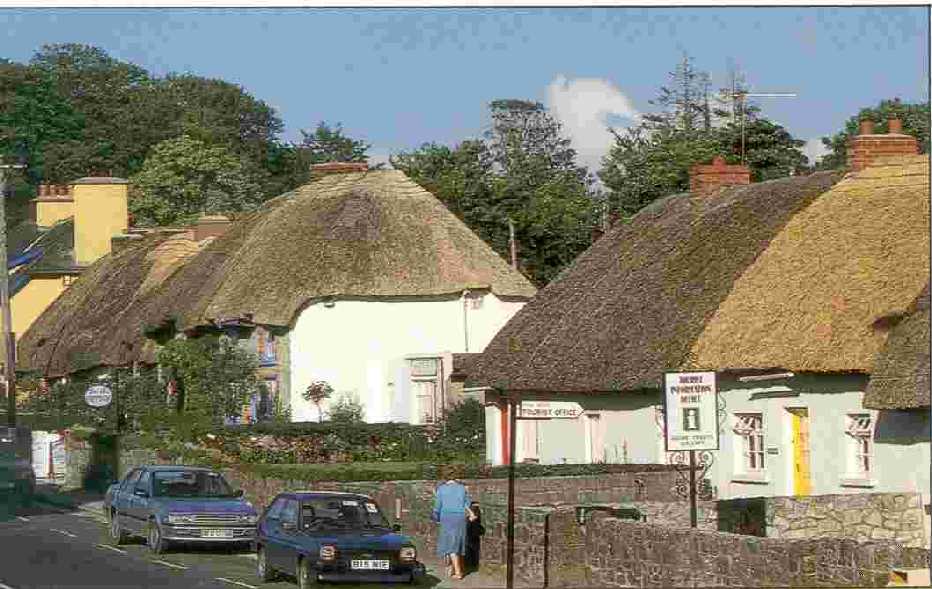 The village has numerous thatched cottages with pretty gardens, which some visitors find rather “twee”.

Chancel, quadrangle, tower are here,
Gaunt cloisters, roof and mullions riven,
With that clear interspace through which
Souls, tired of flesh, looked out to heaven.

The White / Trinitarian Monastery, founded c.1230 by Sir Maurice FitzGerald, 2nd Baron Ophaly, Justiciar of Ireland, was the only establishment in Ireland run by the white-robed Trinitarian Canons of the Redemption of Captives, devoted to ransoming Christians captured during the Crusades.  Since 1811 it has been the local parish church of Saint Nicholas (RC). Inside there is a fine bronze screen designed by EW Pugin. Behind the building there is an old columbarium. (Photo by Methos31)

The Black Abbey / Adare Friary was founded c.1316 for the black-robed Augustinian Order of the Eremites by John FitzThomas FitzGerald, 5th Baron Ophaly and briefly 1st Earl of Kildare. The rectory was converted in the early C19th into a school under the patronage of Lady Dunraven, and the cloisters were turned into a Mausoleum. The main edifice became the parish church of Saint Nicholas (CoI) in 1875, and was restored in 1937. On the outside of the south aisle (originally the Lady Chapel) is the only known Tudor Rose in Ireland.

The present neo-Gothic mansion was largely designed by the 2nd Earl and erected in 1832 on the site of a smaller Georgian house. It was considerably enlarged in 1862 by the 3rd Earl with assistance from leading architects such as the Pain brothers, AW Pugin, and PC Hardwick. The stonework is credited to local mason James Conolly.

Adare Manor was the home of Windham Thomas Wyndham-Quin (1841 – 1926), whose preferred title was Viscount Adare. He was a war correspondent in Africa, a big game hunter in Colorado, USA, a junior British cabinet minister, and with William O’Brien MP, an architect of the sweeping Land Purchase Act 1903 (called the Wyndham Act after the English Conservative minister George Wyndham), radical legislation which effectively abolished landlordism in Ireland. He also attended the first meetings of the doomed Senate of Southern Ireland in 1921.

The mansion was acquired in 1987 by American businessman Tom Kane, and is currently run as the extremely luxurious Adare Manor Hotel. The impressive interior contains a fine collection of paintings. Several historic edifices are located in the grounds, now taken up by the Adare Manor Golf Club and the separate  Adare Golf Club.

Desmond Castle was built in 1326 by Thomas FitzJohn FitzGerald, 2nd Earl of Kildare, to replace an ancient O’Donovan Clan Ring Fort on the riverbank. Assaulted several times, the castle was strengthened and enlarged after each siege, until Cromwellian soldiers “slighted” it in 1657. The ruins include the remains of the Great Hall. The Franciscan Friary, founded in 1464 by Thomas FitzGerald, 7th Earl of Kildare, was restored by the 3rd Earl of Dunraven in 1875 and is in a reasonably good state of preservation. (Photo byHokiecoyote). It features a graceful tapering tower, a nave, choir and south transept of late Irish gothic origin, and a fine sedilia. The cloister is beautiful. The ruined C13th chapel was dedicated to Saint Nicholas of Myrna. Nearby is a ruined C15th Desmond family chapel.

John Wesley preached to the people of Adare in 1765 from the shade of an ash tree close to the east wall of the Franciscan friary. Today a stone marks the site, where Methodists hold an annual ceremony.

Kilgobban House is the current residence of Thady Windham Thomas Wyndham-Quin (b.1939), 7th Earl of Dunraven and Mount Earl, and his family.

Garraunboy Castle was built in the C15th as a Faltagh family stronghold.

Kildimo (Dimofornia) (Cill Dioma),, sometimes pronounced ‘Kildeema’, comprises Old Kildimo and New Kildimo, about a mile apart. According to Mainchín Seoige, the epoymous Saint Díoma is said to have flourished in the second half of the C5th. He was reputedly of royal stock, the son of Cas, king of Munster, and an uncle of Saint Munchin, patron of the diocese of Limerick.

Slattery’s pub,  a popular traditional music venue, has been owned for over 150  by same family, who also provide friendly and efficient B&B accomodation in the house next door, with a pretty walled garden.

There are several ruined strongholds in the area, including Cullam Castle and Ballyculhane Castle.

Dromore Castle, a multi-turreted mock-medieval fairytale fantasy with battlements near Pallaskenry, was designed by the fashionable English “Ruskinian Gothic” architect EW Goodwin for William Hale Pery (1840 – 1896), 3rd Earl of Limerick as a luxurious country retreat. Lord Limerick was famous for his extravagant hospitality, and lavishly entertained hunting parties at the castle. 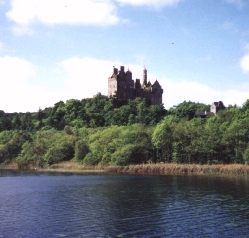 Situated high on a limestone ridge overlooking 100 acres of woodland and two lovely lakes, the castle is magnificently silhouetted against the sky. (Photo – www.kildimo.com)

The property was later acquired by a local farmer, who removed the castle roof in 1956 to avoid paying rates.

It is regarded as one of the most important Victorian Gothic edifices in Ireland. An architectural account with a great photo can be viewed here. The building recently underwent restoration with a view to converting it into an upmarket hotel.

A bone crucifix was found in the 1950’s at Dog’s Island, the boggy ground between Dromore Lake and its smaller sister lake.

Pallaskenry (Pailís Chaonraí – “the Pallisaded Fortress of Kenry’), a community close to the River Shannon estuary, derives its name from the Caonraí, a Celtic tribe who occupied the area in the remote past and gave their name to the barony of Kenry.

Interesting finds in the area have included the Shannongrove Gorget / Collar, thought to date from c.750 BC, found  in the C18th at a depth of 12ft in a bog on lands granted to Phineas Bury during Cromwellian plantations, and now on display in London’s Victoria & Albert Museum. A picture can be viewed here.

Curraghchase House, built in the C18th and severely damaged by fire in 1941, was the family home of poet Aubrey DeVere. The mansion, although now closed up and derelict, is still standing in its entirety. (Photo – www.tourismresources.ie)

Killulta church is a tiny edifice, believed to date from the C9th.

Killeen Cowpark church is a well-preserved C15th building with narrow windows and a turret-like belfry, giving it a curiously fortified appearance.

St Bridget’s Well in Cartown is very well maintained and clearly the object of some devotion. The water is traditionally applied to afflicted eyes and limbs. It is said that once, when a man brought a blind horse to the well, the animal was cured and the man became blind.

Kilcoman is the location of The Celtic Theme Park and Gardens, featuring replicas of Stone Circles, Dolmens, a Crannog, a Ring Fort, an Ogham Stone, a Holy Well, and a Mass Rock.