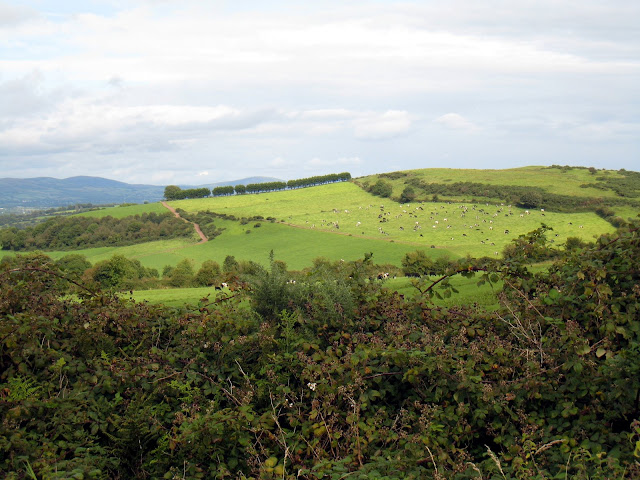 Caherconlish (Cathair Chinn Lis – “the town at the head of the stone fort”) (pop. 1000) is a small market town with two busy shopping streets and an attractive former Fair Green. Situated on the banks of the River Groody, the community identifies closely with the townland of Caherline (Cathair Laighin). The undulating counryside surrounding the leafy residential district, while pastoral in appearance, is mined for zinc.

This stone fort referred to in the toponym was probably an Anglo-Norman castle erected in the early C13th, destroyed in 1304 in an attack by the king of Thomond, Turlough O’Brien.

In 1317, while Robert Bruce’s Scottish army was based at Castleconnell, his enemies Richard de Clare and Muirceartach O’Brien camped locally.

By 1358, when King Edward III conferred certain privileges on the provost, bailiff and common people of “Catherkenlyshe”, it was a walled town with four Tower Houses and a celebrated college, now recalled only by a meadow known as “the College Field”.

During the Williamite Sieges of Limerick in 1690 and again in 1691, the royal army camped nearby.

The area saw agrarian unrest in the early C19th and sporadic violence during the War of Independence.

The medieval parish church, rebuilt in 1780, is in ruins, but its steeple is a prominent feature of the town.

Caherconlish church (CoI), long disused but still owned by the Anglican diocese of Limerick and listed as a protected C19th building, has been converted into a community resource.

Caherconlish church (RC), dedicated to Our Lady Mother of the Church, was erected in 1968, and pertains to the diocese of Cashel & Emly.

Caherline / Archbishop Dermot O’Hurley Memorial church (RC), was built in 1977  to replace an older church nearby, also named in honour of  Diarmaid Ó hUrthuile, a Roman Catholic Archbishop of Cashel put to death for treason during the reign of Queen Elizabeth I.

Ballyneety was the site of a vital overnight encampment on Sarsfield’s Ride.

Friarstown / Clochnamanach Abbey (from Cloch na Manach – “the stone of the Monks“), erected by the Clan-Gibbons family in the C13th, was for a time home to members of the Franciscan Third Order Regular, lay brothers who arrived c.1450 and are believed to have stayed less than 100 years. The abbey was repaired in 1932, and extensive ruins remain.

“Limerick’s Tara” was the name of an article by Eamon P Kelly and Tom Condit, published in Archaeology Ireland in 1998, detailing a complex of prehistoric monuments located on a hill overlooking Friarstown Abbey. The area, currently used for pasture, contains two large hilltop enclosures, which the authors interpret as henges, plus several smaller enclosures and a number of Standing Stones.

It is recorded that beneath one of the Standing Stones located in the field south of the larger henge, human bones of “extraordinary size” were uncovered early in the C19th. According to locals, these were the bones of a 7ft man; his identity is a mystery, although some claim him as Saint Patrick.

Kilpeacon is recorded by Lewis (1837) as the location of  “a place called Bawnachumtha, or the ‘Camp Field’, in which are some raths or circular fortifications; and on the summit of Greenhill is a rath or doon, about 320 feet in circumference and 18 feet high. In the adjoining fields are several smaller forts, surrounded by a single vallum and quite level within; near these forts a crown of gold, in the form of a shell, and weighing 51/2 ounces, was dug up by a peasant in 1821, and sold to a goldsmith in Dublin for £18.18.”

Kilpeacon church (CoI), rebuilt in 1762, was repaired and enlarged in 1820, and a new chancel was added in 1867. The nave is formed by the original 1690 church, burned by Whiteboys in 1760, a year after Edward Villiers added the tower. The founder was Sir William King (d.1706), who uil a splendid cassle locally, lon demolished, and whose ornate marble memorial dominates the interior. The East Window (1867) commemorates the Westropp family of Attyflin. A previous church on the site was listed in 1410 as dedicated to Saint Becan.

Crecora (Craobh Chumhra – “fragrant branch” / “the tree of the sign”) (pop. 400), an otherwise unremarkable village, traditionally derives is name  from a whitethorn bush where pilgrims used to hang tokens.

The townland of Attyflin, loosely translated as “the site of Flan’s house“, is called after a colourful character called Flan O’Brien, fl. c.1540, whose castle farm supplied the monks of Manister with beef. One day, Flan sent a mocking note to the abbot, telling him that if his faith was worth anything, the promise would weigh as much as the beef. The abbot weighed the beef against the note in front of Flan’s messenger and found the piece of paper was heavier than the beef. When he heard this, Flan raced to the monastery to see the weighing scales with his own eyes, confessed his sins and became a monk.

Attyflin Park, a splendid Georgian manor house, was the childhood home of Thomas Johnson Westropp (1860 – 1922) a notable antiquary who conducted thorough topographical surveys, wrote extensively on the history and folklore of a number of counties in Ireland, especially Counties Clare and Limerick, and was famously commissioned by the RIA to photograph Dublin City in the immediate wake of the 1916 Easter Rebellion. His cousin Col. George O’Callaghan-Westropp (1864-1944) was also born here. The privately owned premises are open to the public on certain days in spring and early summer.

Kyle, a small mound south-east of Attyflin House, was according to tradition the grave of warriors killed in a battle between the Danes and Brian Boru. Westropp says the Kyle was 10 feet high and covered with bushes. The exact location of the Kyle is no longer known, as it was destroyed in the 1850s.

Patrickswell (pop. 3400), a pleasant but historically unremarkable town wih several good pubs, is one of many places around Ireland where Saint Patrick supposedly blessed the local water supply. Although the village did not appear on maps until the early C19th, the name Patrickswell was contained in a 1689 list of lands owned by Thomas Rose, twice Mayor of Limerick, who was buried in the family vault in Kilcornan graveyard.

Greenmount Park is the home of Limerick Racecourse, the first built from scratch in Ireland for 50 years, inaugurated in October 2001 with a record crowd of 18,000. It is the seventh different location for racing in County Limerick since the first recorded fixtures in 1790. The present course claims to host the most varied series of meetings of all the courses in the country, including twilight races. Greenmount Park is also the venue for the Limerick Show, the largest agricultural fair in Munster, held every August.

Rossbeg Cottage, a  restored 500-year-old thatched residence on a working farm, provides self catering holiday accommodation for up to six people.

Fanningstown Castle was founded by the FitzGeralds  in 1285.

Although granted to successive Elizabethan administrators, by the time Cromwell’s army arrived the castle was held by one Edmund Fanning, a relative of the unfortunate Dominic of Fanning’s Castle in Limerick City.

Since 1936 the castle has belonged to the Normoyle family, who let it as self-catering holiday accommodation for up to 10 people at prices ranging from €3000 to €4300 per week.