Brosna (pop. 1200) is a rural parish in the Sliabh Luachra area with no less than seven pubs. A tributary of the River Feale, the Clydagh, spanned by a C19th bridge remarkable in it time for its 60ft arch, forms a natural western boundary to the area. The parish is in the old Barony of Trughenackmy.

In 1837 Brosna had 12,168 inhabitants. The population was vastly reduced by starvation and disease during the Great Famine and subsequent emigration.

The church of St Moling & St Carthage (RC), a neo-gothic structure built in 1868 to a design by George Ashlin, houses a truly remarkable marble Pugin altar, famously put in place by a team of 11 horses. The marble altar rails were donated in memory of his parents in 1946 by Denis Guiney, founder of Clery’s department store in Dublin. Many of the stained glass windows were donated by parishioners; those behind the altar are particularly impressive. The public space fronting the church now serves mainly as a car park, but in the past would have acted as a fair ground or market.

A Holy Well marks the spot where in 614 AD, as she returned to her parents home from Carlow, Saint Moling’s mother gave birth to him in a snowdrift, whereupon “a service of angels descended” and caused the snow to melt for 30 feet around the spot where the baby lay. This well has been a place of pilgrimage every Saturday in May for many years. A decade of the Rosary is said at each of the 5 kneelers around the well, going 3 times around the kneelers. The pilgrims then take sips of water from the well in their cupped hands, and many cures have been attributed.

The heavily forested land south of Brosna is designated as a protected Hen Harrier area.

Crochaun Mountain ascends to 1400ft above sea level, with wonderful views of the region. Rivers rising locally include the Feale, the Clydagh, the Braonach and the Munster Blackwater.

Brosna is the venue for the annual Con Curtin Traditional Music Festival.

Brosna is within easy reach of

Knocknagoshel / Knocknagashel (Cnoc na gCaiseal – “Castle Hill”) (pop. 760) made its first impact on Irish history with an event still commemorated by a plaque on the gable end of a house in the centre of the village: at an 1891 rally in Newcastle West addressed by Charles Stuart Parnell, local men carried aloft an extraordinary banner bearing the message “Rise up Knocknagoshel, and take your place among the nations of the earth!”

The Knocknagashel area saw several incidents and at least one major atrocity during the Irish Civil War. On 6th March 1923 three Irish Free State Army officers and two privates were lured into Baranarigh Wood by false information about a Republican dug out in the area, and killed by a booby trap mine. One officer was a local man. Lieutenant Pat O’Connor, targeted by the Anti-Treaty fighters because of his knowledge of the local IRA organisation and the men involved in it and because of the energetic manner in which he pursued the irregular guerrillas. Later that night Free State troops chained  nine Republican prisoners around a bomb at Ballyseedy Cross near Tralee and then detonated it, machine-gunning and hurling grenades at any survivors of the blast (one escaped to tell the tale). Ten more Republican prisoners were murdered in County Kerry over the following fortnight.

Knocknagashel celebrates its “Pattern” every  15th August with a ribbon-twirling contest in tune to traditional music; the winner gets to take home the King of Sheep.

The annual Mindana Halloween Festival, hosted by a local street theatre group, is very popular throughout the region, and has won several awards.

Lyreacrompane (pronounced Lye-rah-crum-pawn), aka Lyre (not to be confuse with the hamlet Lire), is an isolated rural community scattered through the foothills of the Stacks Mountains, an area of river and bog criss-crossed by bohreens, bog paths and field tracks. 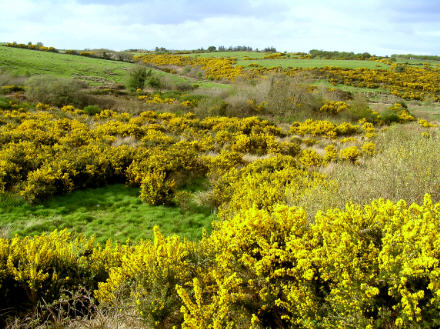 The district is notable for its wildlife (especially butterflies!), and remarkable for the local mixture of history and folklore, from Fionn’s Mighty Leap … and his second not so mighty one, Matt Dillane’s dream, trains in Lyre and the Germans who helped make them a reality in Quill’s bog from the 1930s to ‘60s. Visitors are invited to experience “tae in the bog“, use a sleán to cut turf in the old way and learn how to save it for the winter.

The playwright John B Keane spent the summers of his youth in this wild moorland setting, where he met many of the characters that later inspired his plays and stories. One of those characters was Dan Paddy Andy O’Sullivan, the last of the great Irish Matchmakers, who is commemorated every August in The Dan Paddy Andy Festival, four days of music, song, dance and storytelling.

Castleisland (Oileán Ciarraí) (pop. 2200) is a busy market town on the River Maine at the mouth of the Vale of Tralee. Known as “the Gateway to the Kingdom” (of Kerry), the town was long famous for its red (oxidised) marble. Renowned for the width of its Main Street, allegedly second only to Dublin’s O’Connell Street, the town was described by one of its most famous citizens, sports journalist Con Houlihan, as ‘Not so much a town as a street between two fields’. Most of Castleisland’s commercial premises are along this colourful main drag, many with elegant old-fashioned shopfronts; there are several good pubs and eateries. (Photo – www.odonoghue-ring-hotels.com)

Castleisland got its full name, Castle of the Island of Kerry, from a castle built in 1226 by Geoffrey de Marisco, Lord Justice (Viceroy) of Ireland during the reign of King Henry III. The island was created by using the river as a moat. The castle was subsequently acquired by the FitzGeralds of Desmond, who made it the centre of Geraldine power in Kerry. In 1345 the castle was held for the Earl of Desmond by Sir Eustace de la Poer and other knights; it was captured by Lord Justice (Viceroy) Sir Ralph Ufford, who had them executed for insurrection.

The De Marisco Tower, located behind some private houses at the western end of the town, is all that is left of the once massive castle complex.

The Market House at the western end of Main Street dates from 1747.

St Stephen’s church (CoI) was built c.1840 on the site of a mid-C17th church, ruins of which still stand. Reroofed in 1990, the Victorian Gothic edifice is now mainly  used as a public hall. The churchyard cemetery contains gravestones and mausolea dating back to 1650, and is still in use.

The church of Ss Stephen & John (RC), an elegant neo-Gothic edifice with a beautiful marble altar, was built 1881 – 1884. Although the architect is believed to have been Walter Doolin, some claim that the design was originally by AW Pugin.

The War of Independence saw several violent events in and around Castleisland. On 9th May 1921, two RIC constables were shot by the IRA outside the church, one fatally. The Black & Tan retaliations against the townsfolk were vicious.  Five IRA men and four British soldiers were killed during a gunfight in the town on 10th July 1921, the day of the Anglo-Irish Truce, indicating the bitterness of the conflict in Kerry.

The Carnegie Trust Library at the eastern end of Main St was designed by RM Butler in 1920 and burned to the ground in the same year. It was subsequently rebuilt on the same site and still functioned as the town library until recently, when a new complex was inaugurated.

The Ivy Leaf Theatre & Arts Centre, a small but attractive venue, hosts plays, exhibitions and special events, including the annual Kerry Amateur Drama Festival every March. A beautiful 300lb bronze bell, cast in 1776 for  St Stephen’s church by Thomas Rudhall in Gloucestershire, and housed in a special alcove of the Arts Centre for over 30 years, was stolen in the summer of 2012, probably to be melted for scrap metal.

The River Walk makes for a pleasant scenic stroll within the town boundaries.

A Light Railway opened in 1875 between Castleisland and Gortalea closed in 1976; the route is due for redevelopment as a walking trail.

Crag Cave is the entrance to an extensive cave system running for 3.8 km under the town, discovered by Dr Donal and Mrs Margaret Geaney in 1983 and open to the public since 1989. From the entrance there are spectacular views of the McGillicuddy Reeks and Tralee Bay.

The Patrick O’Keeffe Festival, held annually on the October bank holiday weekend, is a celebration of great traditional fiddle music in the Sliabh Luachra style.

Castleisland’s Horse Fair is a major regional event that takes place at the beginning of November every year.

The River Island Hotel*** is highly recommended, especially for its dining rooms and bars.

Memory Lane Museum, four miles outside Castleisland on the Cordal Road, is owned by the Bunt family. Their collection comprises an interesting range of vintage cars (including a 1929 Barker and a 1930 Silver Wraith) and tractors, horsedrawn carriages, antique farm machines and implements, old car mascots and “motormobilia”. The China Craft is an attractive display  of porcelain antiques / memorabilia / bric-a-brac. The Museum commands great views of Carauntoohil.

Scartaglin (Scairteach a’ Ghleanna – “Thicket of the Glen”) is a scenically located village of some character, with several attractive features. 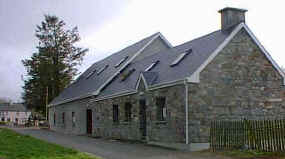 The Sliabh Luachra Cultural Centre has a modern 200-seat theatre / cinema, an exhibition space, recording facilities and a pleasant café. It  offers classes in music, song, dance, speech and drama, serves as a venue for Bingo sessions, old folks’ evenngs and private functions, hosts an International Summer School and a famous annual Fleadh Cheoil every August, and is the sarting point for the Sliabh Luchra Cultural Trail.

The village was the inspiration for the 1990s Kansas City traditional Irish music group Scartaglen.

Farranfore (An Fearann Fuar – “the Cold Land”) came into existence as a turnpike; a gate at the crossroads in the village marked the boundary of the lands of the Earls of Kenmare. Farranfore railway station, opened in 1859, was long known as Farranfore Junction, as it was the point where one boarded for the spectacular train ride to Valentia Harbour, which was the western-most railway in Europe. It is the only railway station in the Republic of Ireland that connects with an airport, in this case Kerry Airport. Kerry Airport is a single runway facility used by Ryanair and Aer Arann for regular flights to / from Dublin, Manchester, Liverpool, London-Stansted, Lorient-South Brittany, Dusseldorf and Frankfurt-Hahn, and by other airlines for charter flights.

Farranfore is on the N22, roughly equidistant between Killarney and Tralee and close to Castlemaine on ByRoute 1.