The Mullaghareirk (Mullach na Radhairc) Mountains, aka Sliabh Luachra, feature some of the wildest and most remote sections of County Limerick and County Cork. Eight signposted 5 to 24km loop walks cover a variety of terrain across rolling hills, ranging from open farmland and forest paths to quiet country roads, taking in many historical sites, natural springs, bogs full of birds and other wildlife. The air is pure and clean, as evidenced by the presence of large lichens on the posts along the side of the roads.

Drumcollogher / Dromcollogher / Dromcolliher (etc.) (Drom Collachair – “The Ridge of the Hazel Wood”) (pop.850) grew up in the 1640s when the Courtenay family came to the area to plant the lands they received following the defeat of the Munster Geraldines in 1583. The fine open Diamond is a reminder of the village’s plantation origins.

Springfield Castle, aka Drumcollogher Castle and  Gortnatubrid / Gort na Tiobraid Castle, was a Fitzgerald stronghold until the Williamite War; Sir John FitzGerald, serving with the Irish Brigade of the French army during the War of the Spanish Succession, was killed at the Battle of Oudenarde in 1708.

After brief FitzMaurice occupation the castle became the residence of the Deane family. Sir Robert Tilson Deane became Baron Muskerry in 1781. The entrance gate was inspired by Maoiri tradition, which another Lord Muskerry encountered in New Zealand;  the current Lord Muskerry lives in South Africa.

Nowadays the Castle is occupied by Jonathan and Betty Sykes, who run a deer farm of some note and provide high quality Self Catering Accommodation.

Páirc na Staille (“Field of the Stallion”), just outside the castle gates, was the site of the Battle of Gortnatubrid in late September 1579,  at which John of Desmond routed a superior English force, killing 300, during the ultimately doomed Second Desmond Rebellion.

Springfield / Gortnatubrid church, built as a Chapel of Ease for the FitGerald family, was linked to the castle by an underground tunnel. The church  was adapted for Anglican use, but is now in ruins; the graveyard contains both Protestant ans Roman Catholic burials, including an interesting FitzMaurice tomb. According to tradition, this was where Dr Nicholas Sanders, the Papal Nuncio to Munster during the Second Desmond Rebellion, who had survived the massacre of Smerwick Harbour but died of dysentry in 1581, was borne from the nearby hills by four knights for interment.

St Bartholomew’s church (RC) was completed by Fr Michael FitzGerald in 1824, and has been renovated several times.

St Bartholomew’s is also the name of the medieval church in Drumcollogher’s cemetery, built to replace an ancient church destroyed in a local war in 1302, and now an overgrown ruin.

The National Co-Operative Dairy Centre, Ireland’s first co-operative creamery, has been faithfully restored to preserve the atmosphere and character of a Co-Op Dairy in Ireland at the beginning of the C20th, complete with a working steam engine, boiler and milk vats from the time. It is dedicated to the Founder of the Movement in Ireland, Horace Plunkett.

Drumcollogher was the scene of the Irish Free State’s major tragedy in September 1926, when a warehouse used as a cinema caught fire during a film, killing 50 people. The victims are commemorated by a Celtic Cross in the church grounds.

The Irish Dresden Workshop & Showrooms, established in Dromcollogher by Oskar and Johanna Saar in 1962 following the WWII destruction of the Mueller Volkstedt works in Germany, ceased production in April 2009, a victim of the recession.

An t-Ionad Glas / The Organic College runs the only nationally certified fulltime and part-time courses in organic production in Ireland, along with weekend seminars, lectures, workshops and night classes.

There’s only one house in Dromcollogher is a song written by Percy French, whose stay in a house in the Town Square is commemorated by a plaque. (Locals indignantly point out that there are in fact several streets of houses in the town!)

Killagholehane / Killaliathan church, dedicated to Our Lady of the Snows, was recorded as early as 1201; partially destroyed in the fighting of 1302, it was rebuilt on the same site.

Glenacopple Wood (Gleann na gCapall – “Glen of the Horse”) is named for a local tradition. Apparently, a woman who was thirsty during the saving of a crop of hay went into the nearby  Killagholehane church and drank the consecrated wine. For this heinous blasphemy, she was ordered to plough out the glen with two white horses, and her ghostly shade is still engaged in the task.

Milford, a village on the River Deel, has several attractive buildings. 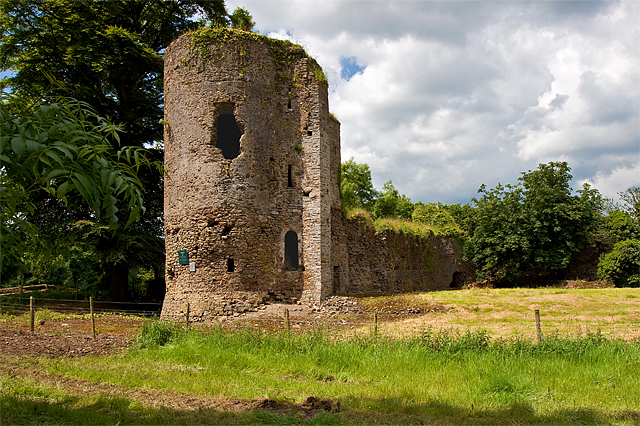 Kilbolane Castle, a classic edifice with a moat at the top of Kilbolane Hill, was built shortly after the arrival of the Normans as a stronghold of the De Cogans and later belonged to the FitzGibbon branch of the Geraldines.  (Photo by Mike Searle)

After the suppression of the Desmond Rebellions it was granted to Hugo Cuffe, who was unable to exert real power in the area, and in 1590 it reverted indirectly to the Fitzgibbons when it was granted to Sir William Power, husband of Helena FitzGibbon.

The Castle was destroyed during the Wars of the Three Kindoms, leaving only two of its towers in liveable condition. The east tower was acquired by Captain John Nicholls, who built a single story house against the bawn wall and passed the property on to his eldest grandson, John Bowen, who began to build Kilbolane House at the end of the Castle garden shortly after 1695.

The church of the Assumption of the Blessed Virgin (RC) dates from 1903.

Milford is roughly equidistant from  Charleville and Liscarroll on ByRoute 5.

Tullylease (Tulach Leis – “The Hill of the Huts”) situated at one of the most northerly points of County Cork, was the site of an important monastery, and got its name from the huts or cells the monks had to build themselves to live in, which at one time covered much of the hill.

The monastery was founded by Saint Berehert / Berichter / Benjamin who, with his father (reputedly a Saxon Prince) and two brothers, came to Ireland after the Synod of Whitby in 664 AD. Another saint of the same name, who was possibly also Abbot, died in 839 AD.

“The Abbey”, as this ruined medieval church is known locally, stands on the site of the orignal monastic foundation. The oldest part may date from the C12th, while the south door and window are early C13th, and the present chancel was built in the C15th.

Early Christian cross-slabs were incorporated into the church walls; one, fastened to the interior of the east gable, one, dated to the C8th or C9th because of the resemblance of its cross to that of the Book of Lindisfarne, is regarded as the finest example of its kind in existence today. It bears inscriptions in Greek and Latin, including the legend QUICUMQUE LEGERIT HUNC TITULUM ORAT PRO BERECHTUINE (“whoever reads this inscription, let him pray for Berichtuin” – perhaps referring to the founder).

There is great devotion to Saint Berehert in the area. Two local Holy Wells have  especially strong reputations for curing eye complaints.

Nearby, a steep road leads up to a T-junction known as “the top of Killileigh”, commanding spectacular views of  the ‘Golden Vale’ countryside,taking in the Galtee Mountains to the River Shannon and northwards to the Silvermines Mountains and to Limerick City in the north west.

Meelin is named for, or at least associated with, a Banshee said to haunt nearby Moylan’s Rock. The village is strongly associated with the musical culture of Sliabh Luchra. The surrounding countryside is beautiful.

Meelin’s moment of glory in the international limelight was in December 1890, when the New York Times reported that villagers attacked Charles Stuart Parnell at a meeting in Mallow.

Meelin is due north of Newmarket on ByRoute 5.

Rockchapel (Séipéal na Carraige – “chapel of the rock”), aka The Rock, a small parish on the upper waters of the River Feale in the Mullaghareirk Mountains, derived its name from a Mass Rock that was located here in penal times.

Folk music in the Sliabh Luachra tradition is very much alive in this rural village, which hosts an annual Fleadh Cheoil.

Bruach na Carraige is a cultural / interpretative centre dedicated to keeping alive the Sliabh Luachra traditions of music, song and dance, with an auditorium, exhibition area,  library and archive.

Mount Collins / Mountcollins (Cnoc Ui Choileáin) (pop. 1,500), in the extreme southwest of County Limerick, straddles the River Caher, a tributary of the nearby River Feale. The village can only be accessed by very narrow bridges.

Mount Collins was formerly called Knockroedermot. The  area, long the Tuatha of Corca Oiche, was ruled by the Ui Choileáin clan from the C4th AD to the C13th.  However, the village derives its present name from Fr Luke Collins, an C18th priest who used to celebrate Mass in a building on the adjacent hill known as the Mount.

Mount Collins lies on the edge of the Munster Coalfield, a sporadically exploited anthracite deposit. The surrounding bogland was partially reclaimed in the C19th, and a number of roads built as relief projects to help alleviate poverty at the time of the Great Famine.

The church of Our Lady of the Assumption (RC), erected in 1859 and extended in 1954, has a tall steeple visible for miles around. The church bell (1992) quaintly commemorates a Mrs Bell.

The point at which the borders of County Limerick, County Kerry and County Cork converge is marked by a plaque in the River Feale.