Newcastle West / Newcastlewest (pop 8000) is a busy market town situated in the River Arra Valley in the centre of prosperous dairy farming country. It used to have 36 pubs, and still has 20, along with two nightclubs.

The Desmond Castle dominates one side of the Square. The complex suffered extensive damage over centuries of wars, and shows evidence of much reconstruction and alteration. It was largely consumed by fire during the 1641 Irish Rebellion, and has not been lived in since.

Originally called Castle Roe, after a castle supposedly built by the Knights Templar in 1184, which later passed to the Earls of Desmond, the town came to be known as Newcastle, West Limerick, but over time the ‘west’ became part of Newcastle, resulting in its current name.

According to tradition, locals killed many of the Templars. Some sceptical historians think it more likely that the original castle was one of several built by Thomas FitzMaurice (d.1215), who was granted land in Munster by King John, and was the ancestor of the southern Geraldine dynasty. However, he or his first descendants may well have had Templar connections.

The O’Briens sacked the town in 1302 and destroyed it in 1315. In 1329 Maurice FitzGerald became the first Earl of Desmond. By this time the Geraldines already controlled all South Munster from Dingle to Youghal. Three battles were fought near Newcastle during the late C16th Desmond Rebellions, after which huge tracts of land became forfeit to the Crown.

10,500 acres / 42 km² of the former Earl of Desmond’s lands were granted to Sir William Courtenay (1553 – 1630), Knight of Powderham Castle, Devonshire, de jure 3rd Earl of Devon (whose second wife, Elizabeth Sydenham, was Sir Francis Drake’s widow). In the opinion of the young Earl of Bath, Courtenay was “a man who, though he gives himself out to all víee, as drinking, whoring etc., yet he neither wants wit to devise, nor might to practise how to strengthen himself and weaken others“. However, his religious views drew adverse comment in London, and he was formally denounced in 1624 as a Roman Catholic recusant. The family nevertheless prospered, mainly in England, progressively acquiring the titles of Baron and Viscount. By the late 18th they owned over 80,000 acres in West Limerick.

The title of Earl of Devon, dormant since 1556 (and not to be confused with the title Earl of Devonshire, held by the Cavendish family co-extensively with the title Duke of Devonshire) was retrospectively revived in 1831 by William “Kitty” Courtenay (c.1768 – 1835), 3rd Viscount Courtenay, a flamboyant homosexual who led a bohemian lifestyle in Paris and New York. He was buried in stately fashion in Powderham at the insistence of his English tenants, who loved him.

The same cannot be said of those who lived on his vast Limerick estates, scene of frequent disturbances by “Rightboys”. Even the Irish Under Secretary, William Gregory, (father-in-law of Lady Augusta Gregory) commented “nothing can be more oppressive than the conduct of Lord Courtenay’s agent“. This was an Englishman called Alexander Hoskins, blamed (by, amongst others, Thomas Moore in his Memoirs of Captain Rock) for the Rockite Revolt 1821 -1824, the most violent and destructive of all the agrarian disturbances, which spread to north and east Kerry, Cork, Clare, Tipperary, Offaly, Laois and Kilkenny. Hundreds were killed, including his teenage son Thomas Hoskins, who was clubbed to death in a quarry by men led by a local blacksmith, Pat Dillane, thought by some to have been Captain Rock in person (a more widely held view is that “Captain Rock” was a common nom-de-plume for anonymous activists). Several thousand soldiers were drafted into West Limerick, many of them garrisoned in Newcastle. Government attempts to suppress the insurgents were, as usual, ferociously heavy-handed, driving the population to greater resentment and anger.

Practically all the lands of the Devon Estate were sold in 1908 in accordance with the Land Act 1903, and the town of Newcastle West was sold in 1910.

Parts of the Desmond Castle complex, including the old castle house (c.1700) where the Courtenays’ land agents lived, were occupied by anti-Treaty Republicans and bombed by Free State troops during the Civil War. 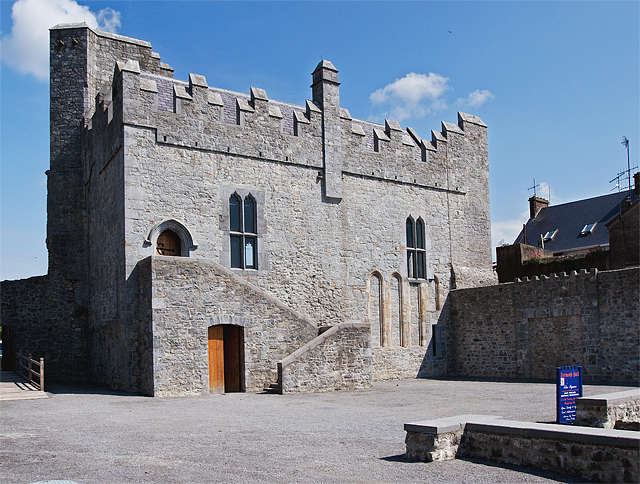 The Desmond Banqueting Hall is one of two C15th halls within the Castle grounds. Restored medieval features include an oak musicians’ gallery and a limestone hooded fireplace. (Photo by Mike Searle)

Outside, a sculpture by Clíodhna Cussen commemorates the 3rd Earl of Desmond, Gerald / Garreth / Garrett FitzGerald, popularly known as Gearóid Iarla, who died here in 1398. A clever and learned man who composed poetry in Irish, French and English, he gained the reputation of being a magician, and is the subject of many legends.

The Castle Demesne is now a popular municipal amenity, with over 100 acres of mixed habitat plus playing fields and sports facilities.

An iron footbridge across the River Dually, a tributary of the River Arra, connects a pleasant River Walk and the converted railway line linking Newcastle West with Ardagh, part of the Great Southern Trail.

The Courthouse, built in 1842, was occupied by a British military garrison during the War of Independence, and was burned down by an IRA flying column on 27th August 1921. The army’s reprisals against the townsfolk were vicious. The façade survived, but part of the derelict edifice collapsed in 1923, killing a teenager. The Courthouse was subsequently rebuilt and is still in use.

The Carnegie Library, a handsome building erected in 1916, was used as a venue for plays, concerts and dances, and during the Civil War as a Court. It housed a school from 1935 to 1992, and is now a thriving commercial centre.

The Old IRA Monument, unveiled by President Sean T O’Kelly in 1955, commemorates 17 volunteers who were killed in the 1918-1922 Troubles.

The Famine Graveyard, located at the rear of St Ita’s Hospital (originally the local workhouse), contains the unmarked graves of hundreds of people who died during the Great Famine. The cemetery is marked by a plain old cross and modern limestone gates sculpted by Cliodna Cussen, showing scenes from the famine.

The Bridge of Tears, a stone bridge at the junction of the Dromcollogher Road, was where, during the time of the famine and for many years afterwards, emigrants from all over West Limerick said their last goodbyes before walking or taking a carriage to Cork and the boat to North America.

The Orchard is a pleasant old house overlooking the countryside, with a welcoming atmosphere and decent, reasonably priced B&B facilities.

The town suffered extensive damage on 1st August 2008 from a freak flash flood as the River Arra burst its banks following heavy rain.

Newcastle West holds an annual Four day Arts Festival every April, an Agricultural & Horse Show in July, and a National Heritage Week Festival at the beginning of September.

Newcastle West is linked via the scenic Barnagh Gap with Abbeyfeale on ByRoute 7. 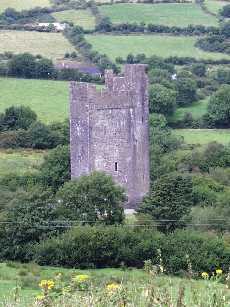 Glenquin Castle, a six storey Tower House, was probably built c.1462 by the O’Hallinan (O’Hanlon) clan, Lords of Orior who had occupied a fortification on the site from 983 AD, and whose lands were still known as O’Hanlon’s Country as late as 1600. The name Glenquin derives from Gleann Choim – “the valley of shelter”.

The castle was captured by the O’Briens, who reportedly killed all but one of the occupants, but subsequently lost it to the FitzGeralds of Desmond. After the failed Desmond Rebellion, the edifice was partially dismantled by Sir Walter Raleigh, and later became the property of Sir William Courtenay.

Glenquin was the rallying point for County Limerick volunteers in the 1916 Easter Uprising, commemorated by a plaque erected in 1966.

The castle is in good condition, thanks to repairs carried out in 1840 by the Courtenay land agent, Mr Firling, and extensive restoration work undertaken more recently by the OPW.

Killeedy was the location of a monastery and convent founded by Saint Ita in 546 AD. The community was attacked by marauding Vikings in 845, 857 and 916 AD.

Killeedy Castle was originally a Geraldine stronghold; all that remains is a single ruined tower.

Nearby Tournafulla derived its name from Tuar na Fola, “the enclosure of blood”, a reference to an ancient battle. The area was covered by forest until the mid-C17th.

Ashford provides good points of access to the Mullaghareirk Mountains. 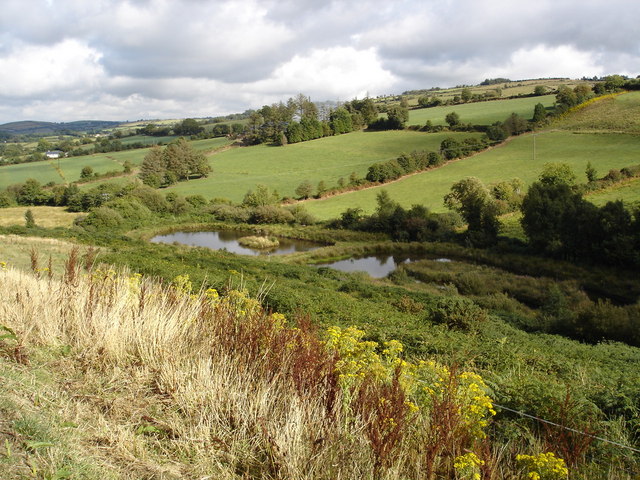 Glen Duff / Glenduff Valley, a scenic rural spot,  is the location of the ruins of Glenduff Castle. (Photo by Roger McLachlan)