Rathkeale (Ráth Caola, derived from Ráth gCaeli -”the fort of the Caeli”, referring to an ancient tribe) (pop. 2000) is a market town on the River Deel. 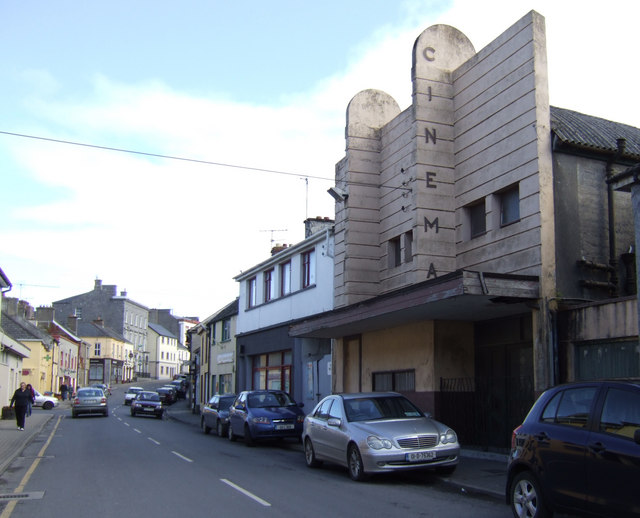 The most striking change on Rathkeale’s Main Street over the last 150 years was the erection of an Art Nouveau cinema, now disused. (Photo by Jonathan Billinger)

With the arrival of the Normans, the area was settled by the Maltravers family, whose name lives on in several local places (e.g Courtmatrix, from Maltravers – Mattress – Matrix). The Earl of Desmond`s hired Gallowglasses (Scottish mercenaries), members of the MacSheehy clan, settled locally in the C15th. and the early C18th saw the arrival  of a significant number of German refugees (see below),  Rathkeale has thus long been home to people of various ethnic or cultural backgrounds, and nowadays has a large Irish Traveller population.

Rathkeale’s Augustinian priory was founded in 1289 by one Gilbert Hervey of the Order of Arosia, whose niece Elinor Purcell endowed the monastery with “the tenth loaf of every baking, the tenth flagon of every brewing, the tenth pork, the tenth mutton and a large portion of every ox killed” in the Manor of Mayer (Croagh).

After King Henry VIII’s 1541 Dissolution of the Monastries, the Abbey was granted to Sir Henry Wallop, and in Peyton’s Survey of 1586 the site was reported to comprise “a castle called Cam-ne-Monaster, alias The Castle at the head of the Monastery, together with 20 gardens, one of which was called the Prior’s Garden“.

The remains of the Priory retain several interesting details.

Sir Nicholas Malby’s soldiers burned the town in 1579, after defeating the rebel Geraldines at Monasteranenagh, where Captains Walter Raleigh and Edmund Spencer played a significant role. In 1580 the explorer and poet were among the principal beneficiaries of the redistribution of the Earl of Desmond’s lands; others included Edmund Southwell.

Rathkeale Bridge is the site of The Croppy Hole, scene of a barbaric atrocity in 1821. A local insurgent scheme to attack the Inchirourke house of the proctor, Ives, to burn the tithe books, was betrayed by an informer. The attackers were surprised by a detachment of highlanders, and forced to withdraw, but dawn revealed three wounded men huddled in a ditch. Their names were Hayes, Fitzgerald and O’Callaghan Darby. They were carried through the streets, doubly lined with soldiers, and thrown unceremoniously into the hole; burning quicklime was poured over them, and they died slowly, screaming in agony. Castle Matrix / Castle Mattress, originally built by the Maltravers family c.1410, became one of the principal medieval strongholds of the Fitzgeralds of Desmond.

After the failed Desmond Rebellions it passed into the hands of the Southwell family. Walter Raleigh gave them a present of some ‘Virginia Tubers’, allegedly the first potatoes to be planted in Ireland, perhaps even in Europe.

The castle was restored by retired aviator Sean O’Driscoll, a former aide to Charles Lindbergh and American spy, who filled it with fascinating artefacts from his travels; subsequently run by his widow Liz as a Guesthouse with Self-Catering accommodation facilities (currently unavailable), it is particularly noted for its fine Library, with an important collection of documents relating to the Wild Geese.

The castle is now an International Arts Centre.

A hoard of coins minted during the reign of King Edward III, believed to have been part of the spoils of the O’Brien victory at Monasteranenagh in 1370, was discovered in Rathkeale in 1846.

This is a fascinating place to find out about the 794 Lutheran refugee families who came to Ireland between 1709 and 1712 from the Lower German Rhenish Palatinate when the French invaded it during the War of Spanish Succession.

The majority moved on, but of those who stayed, about 130 families settled on land belonging to Sir Thomas Southwell of Castle Matrix. They were the first to build silos in Ireland, and this and other innovative farming practices made a considerable impact on Irish agriculture. After John Wesley visited them in 1758, they also had a formative influence on the development of world Methodism.

The small Methodist church at Ballingrane (pronounced Ballingran) has a neat cemetery where many of the Palatine refugees’ descendants are buried.

The church of the Holy Trinity (CoI), erected in 1831, has an imposing tower. Both Protestants and Roman Catholics are buried in the extensive grounds.

St Mary’s church (RC), an impressive Gothic Revival building with a splendid steeple at the other end of the town, was designed by JJ McCarthy and completed in 1881.

Rathkeale became the butt of national ridicule in 2009 when locals began gathering in awe around the stump of a tree being cut down in the grounds of the parish church due to its alleged depiction of the Virgin Mary.

A new cemetery on the road to Cappagh is remarkable for the elaborate headstones favoured by the Travellers’ community.

The Ardagh Chalice, found in 1868 by two young men digging in a potato field on the south-western side of a Ring Fort called Reerasta, ranks with the Book of Kells as one of the finest known works of Celtic art.

Thought to have been made in the C8th AD, it is a large, two-handled silver cup, decorated with gold, gilt bronze, brass, lead pewter and enamel, assembled from 354 separate pieces. The names of the 12 apostles are incised in a frieze around the bowl, below a girdle bearing inset gold wirework panels of animals, birds, and geometric interlace. Techniques used include hammering, engraving, lost-wax casting, filigree applique, cloisonné and enamelling.

The Chalice was found together with a small bronze cup and four ornate brooches (fibulae). Buried without the slightest protection, the pieces must have been interred in a hurry, perhaps temporarily, as though the owner intended to return for them at a later time.

One theory is that they were taken by Vikings sacking a monastery in the region; anothr points to the unnamed Limerick Dane hanged in 1125 for stealing valuables from Clonmacnoise, which were never recovered. It is possible that the chalice was still in use during the C18th Penal times, and was hidden by a Roman Catholic priest interrupted while celebrating Mass nearby.

The Ardagh Chalice and the other items making up “the Ardagh Hoard” are on permanent exhibition in the NMI in Dublin.

In 1981 a large hilltop fort, covering 52 acres, was discovered in the townland of Ballylin, a mile northwest of Ardagh. It is one of the largest found in Ireland to date.

A converted railway line with a bridge over the Daar River now provides a pleasant walking route between Ardagh and Newcastlewest. This is part of the Great Southern Trail.

Ardagh is linked by the R521 to Foynes on ByRoute 7.

Rathronan graveyard (CoI) contains the large family mausoleum of William Smith O’Brien (1803 – 1864), the Drumoland Castle born Conservative MP for Limerick who became a leader of the 1848 Young Irelander “Cabbage Patch Revolt“. His death sentence was commuted to transportation to Van Diemen’s Land (Tasmania), and he returned to Ireland in 1856 to spend some time at his home, Cahermoyle House, before embarking on an extended trip abroad. He died in Bangor, Wales, and is buried in Rathronan.

Cahermoyle House, built on land forming part of the dowry of the last Earl of Desmond’s daughter Catherine FitzGerald on her marriage to Sir Daniel O’Brien, remained in the family until 1922, when the estate was sold to the Oblate Order. The present mansion was built in 1870. It is now a nursing home.