Ballingarry (Baile an Gharraí – “Town of the Gardens”) (pop 500), formerly aka Garth, is a pretty village that is quietly becoming something of a tourist attraction.

Ballingarry Castle, the remains of which can be seen on Knight St, was the seat of the classically “Hibernicised” Norman De Lacy family, who ruled the district from the early C13th until the lost their lands and titles in the Cromwellian and Williamite wars, joined the Wild Geese and went on to serve in the armies of various European continental powers. The castle was used as a barracks during the local disturbances of 1827, and later as a hospital.

Ballingarry was a booming weaving and linen centre in the early part of the C19th. However, the British legislative destruction of the Irish linen industry, followed by the Great Famine, had a serious impact on the town’s prosperity.

Ballingarry parish church (RC), completed in 1879, has a splendid steeple, visible for miles around and floodlit at night.

The village has strong hurling and hunting traditions.

Echo Lodge, a C19th country house long used as a convent, has been converted into a lovely hotel with beautiful mature gardens. It is highly recommended both for its accommodation facilities and Dan Mullane‘s excellent restaurant, The Mustard Seed.

Ballyneale House is an extremely impressive modernised Georgian mansion, overlooking landscaped grounds with an ornamental lake and a private golfcourse. Unfortunately, the premises are not currently open to the public.

Ballingarry is not far from Adare on Byroute 7 and is linked by the R518 to Bruree on ByRoute 5. Knockfierna (Cnoc Fírinne – ‘the hill of truth’) (288m / 948ft) dominates the surrounding countryside. Locals say that it is possible to get an accurate weather prediction by observing the hill. (Photo – www.themodernantiquarian.com)

According to legend, a being called Donn Fírinne lived there, and it was he who gave the hill its name. Some stories say he was the king of the fairies, while others say he was the Celtic god of Death. His castle is still occasionally visible to lonely travellers on moonless nights, with shining lights and music indicating revelry within, but all are agreed that it is most unwise to approach.

The summit, crowned by the remains of a cairn, commands beautiful views of the surrounding countryside, but is marred by a 36ft cross erected in 1950.

A megalithic tomb on the northern slopes is locally known as “Giant Fawha’s grave“, and Lios na bhFiann is a large ring fort on the Strickeen.

The Knockfierna / Ballingarry Ogham Stone, discovered at the side of the hill in 1837, now stands in the grounds of Ballingarry House near Glenbrohane. Dated to c.400 AD, the legend reads “Mailagni  Maqi Gamati”.

A Mass Rock (Carraig an Airfrinn) dating from the early 1700s has had walkways constructed around it, and Mass is celebrated on occasions.

Knockfierna was densely populated during the C18th and early C19th, and the foundations of about 200 dwellings remain on the slopes. These  tiny houses were had stone walls, clay floors and roofs made of peat sods; a single bed of straw often sufficed for the entire family. During the first years of the Great Famine, people evicted from their homes sought refuge on the hillside commonage, constructing primitive hacks with stones taken from walls.

A Legend of Knockfierna can be read here.

Croagh (Cruach, from Cróch – ‘a rounded hill’), also known over the centuries as Mayer / Mayncroo, is a historic village and district which by the end of the C12th boasted an abbey and two castles, of which little remain. 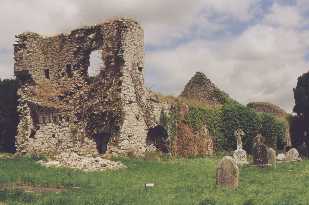 Croagh Abbey, in the townland of Adamswood, was supposedly founded in the C10th and belonged for many years to the Augustinian Canons. It was  used as a seminary for a number of centuries, and then became a collegiate church, and was an Anglican place of worship from the C18th until the 1830s. The chancel was still in use when the great antiquarian Westropp visited the site in the early C20th. (Photo – www.limerickdioceseheritage.org)

Amigan castle is believed to have been destroyed by Williamite forces in 1691. Some make the unlikely claim that King James II spent a night here after his defeat at the Battle of the Boyne in 1690.

Lewis (1837) reported the presence of a Baptist Society school for 300 boys and girls, and also mentions the Mount Aylmer estate as the birthplace of the now forgotten poet William Butler Odell.