The site, beside an ancient crossing point on the River Camoge, had been used for many centuries for the Aonach Cairbre, an annual gathering for buying and selling goods and animals, at which laws were enacted, judgments given, matches made, ancient legends recited, and poetry competitions ,horse racing and athletic events held.

Monks were brought in from Mellifont, the oldest Cistercian establishment in Ireland. The Abbey paid the then considerable sum of 10 shillings in annual homage to the French motherhouse of Clairvaux, of which Saint Bernard had been abbot. However, the monastery was involved in the Conspiracy of Mellifont, and tensions between native Irish and “English” (actually Welsh) monks led to the expulsion of the latter; an attempt by Stephen of Lexington to intervene was thwarted by hastily erected fortifications, and it was some time before the bishop of Limerick, Herbert de Burgo, was able to restore order. Mainistir an Aonaigh became a very powerful establishment, owning extensive lands, and its abbot received the treatment of a Bishop, sitting as a Lord Spiritual in the Irish Parliament. Nevertheless, the abbey fell into debt to the Ricardi de Lucca.

The abbey’s sanctity did not protect the location from violence. In 1369 Gerald FitzGerald, 3rd Earl of Desmond, suffered a defeat here by Brian O’Briain, known thereafter as Brian Catha an Aonaigh (“Brian of the Battle of Aonach”).

On 3rd October 1579 John of Desmond and his Geraldine forces, including the gallowglass troops of the MacSheehys and MacSweenys, were encamped north of Manister Abbey, about half way between the Camogue and Tory Hill.

Sir Nicholas Malby, en route to Limerick with a large army, learned of their presence and marched to attack them. As soon as Sir John saw them he raised the consecrated banner the Pope had given his dead kinsman, James Fitzmaurice Fitzgerald.

The fierce and bloody battle lasted for several hours, and great slaughter was done, with the active participation of Captains Walter Raleigh and Edmund Spencer. The Geraldines were defeated.

Some fleeing soldiers sought shelter with local folk in the abbey, pursued by English troops; then Malby turned his big guns on the venerable walls, and his battle-crazed soldiers charged through the breaches and slew everyone they found within the abbey precincts, men, women, children, including the whole community of 40 monks.

A beautiful legend recorded in the Annals of the Cistercians dates the battle to the 14th August, and recounts that an old monk “escaped from the slaughter, and concealed himself till evening, which was the eve of the Assumption. Alone he entered the chancel where the butchery had taken place but a few hours before, and flinging himself on the broken statue of the Virgin, wept bitterly that now there were none to keep the festival of her to whom the church was dedicated. Whilst he sorrowed broken-hearted, suddenly it seemed the chancel became filled with light, the dead arose with crowns of victory on their heads and triumphal palm branches in their hands. They took their accustomed places in the choir, and sang the vespers in strains of heavenly music. The monk, overawed, took his part in the service, not daring to raise his head to look round. All too soon the last chant died away in silence, the radiance faded into the darkness of evening, and his eyes rested only on the blood-stained walls and the gashed and gory corpses of his brothers.”

Incredibly, the monastery was still alive in the winter of 1601, when monks received Red Hugh O’Donnell and his men after their epic night march from near Holy Cross Abbey, across the frozen Sliabh Felim marshes en route to their doom at the Battle of Kinsale. When the last monk abandoned the site is not known.

In the words of a lecturer: “From the late C17th the noble fabric of Mainistir an Aonaigh gradually fell into decay. Its bell tower fell in 1807. The flagged roof covering the chancel remained in position for long, but a tree growing on one of the walls ultimately loosened it, and it fell with a mighty crash one stormy night in 1874, destroying the beautiful east window, and bringing down with it the great chancel arch which John O’Donovan admired in 1840“.

The abbey ruins cover more ground than those of the more spectacular Rock of Cashel. Remains include parts of the C13th Chapter House, the abbey’s mill, and some domestic outbuildings. Fine stone carvings are visible throughout. (Photo – www.iol.ie)

Burn Cross is the site of an incident reported in the Limerick Chronicle of Wednesday 12th March 1800: “… on Friday night a great number of villains, armed with muskets, swords and pikes, attacked the house of Mr. John Boland …; at the same time a considerable part of the Banditti, on horseback, were placed at a distance to keep watch. …. the house was thatched, and the wretches set the same on fire … [and] Mr. John Boland, his brother James and Mathew were butchered in a manner shocking to relate; the latter lived until next morning … To add to this more than hellish outrage poor Mrs. Boland who with her daughters narrowly escaped from the flames, has become quite deranged and the recovery of the daughters still remains doubtful.”

This was only one of many attacks byWhiteboys and other groups on tithe proctors during those years. The yeomen Boland brothers were thoroughly hated for the severity with which they pressed the collection of tithes, and John was attacked specifically because he had seized a cow belonging toPatrick Ahern, a miserably poor man with a large family. In all, 11 men were hanged and 11 more were flogged (mostly 1000 lashes each) in Fedamore and Croom and transported for life to penal colonies. Of the four Ahern brothers, convicted and sentenced to death but reprieved at the last moment, two died on the way to Van Diemen’s Land, but the other two, Martin and Patrick, survived the journey, and their descendants now live in the Sydney area.acd

Tory Hill (372ft) was long known as Cnoc Drom Asail – “Hill of the Ass’s Back / Hill of the Ridge of Asal” referring to an ancient Fir Bolg leader. It derives its modern English name from the Irish word Tóraidhe, meaning robber or a highwayman, applied to the rapperees who used it as a base in the C17th and 18th. An artificial-looking terrace on the hill is locally believed to be Temair Luachra, the legendary royal fortress of North Munster. In 1852 the National Museum in Dublin acquired a gold lunula collar found here, thought to date from sometime between 2000 and 500BC.

Gerald FitzGerald, 15th Earl of Desmond, observed his brother John‘s defeat at the 1579 Battle of Monasteranenagh from the hilltop, but chose not to become involved in the fighting.

Lough Nagirra, reputed to be bottomless, is home to otters, swans, heron, wild duck and geese, and attracts large numbers of seasonal migrants.

Croom (Cromadh – “bent /curved /crooked”) (pop. 1100), a historic fortified crossing on the River Maigue, is situated close to the exact centre of County Limerick.  There are several friendly traditional pubs in the vicinity.

Croom Castle, aka the Castle of Crom, was originally an O’Donovan stronghold; the king of Thomond, Turlough O’Brien, is known to have been received and entertained  here as early as 1136. A wooden structure was erected by Dermot O’Donovan in 1210.

The castle was rebuilt in stone by the FitzGeralds of Ophaly, later the Earls of Kildare, whose family motto “Crom Abu!” recalls the medieval connection. They walled the town in 1310.

The castle was besieged several times. The last occasion was in 1600, when it was atacked by Lord President Carew at the head of 1500 men; the constable, Pierce Lacey made his escape during the night.

In the winter of 1601 the Countess of Kildare received Red Hugh O’Donnell and his warriors from their famous overnight crossing of the frozen Slieve Felim marshes en route to their doom at the Battle of Kinsale.

In 1671 the castle was granted by King Charles II to the Duke of Richmond, who lived in sporadically it for several years. It was briefly garrisoned by Jacobite troops during the Williamite War.

Croom Castle House, an C18th manor built into the castle structure using some of the stones, was built by John Croker, with additions by Rev Edward Croker, and had other several owners, including two generations of the Lyons family.

The current proprietors offer self-catering holiday accommodation for up to 8 people at prices ranging from €1800 to €3000 per week.

Croom, a regular meeting place for poets of the Maigue School in the C18th, is credited as the place of origin of the verse form known as the Limerick.

The present edifice was built in 1788  by Henry Lyons. The wheel was powered with water from the River Maigue. The mill closed in 1927, but the mill wheel continued to operate until the early 1940s.

Croom Mills Heritage / Visitors’ Centre, housing an audio-visual exhibition tracing the development and growth of the mill, also has a pleasant café / restaurant.

The church of St Mary of the Assumption (RC), originally erected in either 1808 0r 1821, has been extended and remodelled several times.

Croom also has an attractive Church of Ireland edifice in regular use.

Anhid / Toberregan church stands in ruins in a graveyard scenically located at the junction of the Rivers Maigue and Comoge.

Islanmore Stud is on the south side of the village. The original C18th house was built for a younger brother of the Earl of Dunraven. 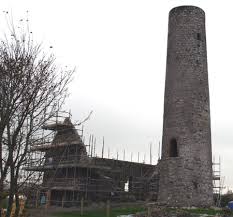 Carrigeen / Dysert / Disert Aenghusa, a monastic site west of Croom, is believed to have been founded by Saint Aengus the Culdee c.780 AD. It features a large but roofless Round Tower and a ruined church dated from as early as the C10th and as late as the C16th, currently undergoing restoration. (Photo – http://croom.wordpress.com)