These pages describe ByRoute 6 between Emly (Co. Tipperary) and Castlemaine on ByRoute 1.

Scarteen House, the home of the Ryan family since the 1750s, is most famous worldwide as being the HQ of one of the best known packs of foxhounds, the Scarteen Hunt (the “Black & Tans“), which hosts regular hunter trials and point-to-point races in the area.

Knocklong, named for a prominent hill, is a rural community with a strong GAA tradition.

Knocklong Hill / Cnoc Luinge ( “Hill of the Encampment”), formerly known as Druim Damhghaire (“Ridge of the Oxen”), is said to have been the site of a military camp established by king Cormac Mac Airt when he invaded Munster during the C3rd AD. The king of Munster consulted a druid, Mogh Ruith, who used magical powers to help the Munster men defeat Cormac’s forces in a legendary battle said to have taken place about 250 AD.

The hill could in fact derive its name from a C7th AD encampment, as it may have been put to similar use about 650 AD, when Dioma, king of Thomond, defeated the Connacht men, who were endeavouring to recover County Clare from North Munster. This historic battle secured Clare for the Dalcassians. There is a greyhound track situated on the low ground to the east of the hill.

(Cnoc Luinge has also been translated as “Hill of the Ships”, supposedly because the tents on the hill resembled ships under sail. Another version holds that small ships used to navigate on a lake that once extended from the hill to Emly village in County Tipperary)

Knocklong Castle was probably founded in the C14th but the present ruin, resembling a fortified mansion rather than a medieval Tower House, dates from the C16th, when it was the chief seat of the O’Hurley family in County Limerick. The castle was held by Garret Mac Thomas in 1583 but was re-occupied by the Hurleys in 1606. By 1655 it was in ruin, according to a report of the time which listed Sir M Hurley as its owner. In 1669 Cornet E Cooper was confirmed in the ownership, and the Hurleys dispersed into County Cork. There is traditionally supposed to be a cave beneath the castle. (Photo by Ger Kelly)

Knocklong hill graveyard, located southwest of the castle, developed around a church that was still standing in 1840.

Knocklong village initially grew up near the castle and the old church. In 1655 the Hurleys operated mills locally, and two fairs were held in Knocklong. Lewis (1837) reported that the October fair usually had “a large show of good horses“. A butter market was held in Knocklong on Tuesdays.

St Joseph’s church (RC) has an attractive interior and a fine stained glass window behind the altar.

Knocklong Railway Station (1849-1977) has a memorial plaque commemorating the “Heroic Rescue of Volunteer Sean Hogan by his daring comrades from armed escort” on 13th May 1919, during the War of Independence. The incident,which involved a close-range shoot-out in which two famous IRA men, Dan Breen and Sean Treacy, were seriously wounded and two RIC men killed (for which two locals, one almost certainly innocent, were later convicted of murder and executed in 1921), is celebrated in a song which can be heard performed by Johnny ‘The Fiddler’ Donegan here.

Knocklong Cottage is a pretty house available for holiday rental.

Hospital (An tOspidéal) (pop. 1800), a rather confusingly named town, was founded c.1215 by Geoffrey de Marisco, Lord Justiciar of Ireland. He is believed to have intended it as a Commandery of the Knights Hospitallers of Jerusalem, although an alternative theory connects it with the Knights Templar. 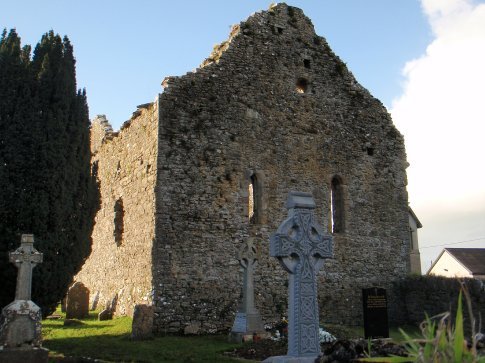 The large medieval abbey church still stands in ruins, and inside can be seen three crude effigies, one of a knight in full armour; the images of a lord and lady are believed to cover the tomb of the founder. (Photo – Emma & Maneesh)

Castle Farm, now home to an Equine and Small Animal Veterinary Practice, was the site of a Tower House built c.1588 by Sir Valentine Browne of Lincolnshire, which later came to be called Kenmare Castle. He acquired extensive property locally and around Killarney (Co. Kerry), and his successors were almost all named Valentine.

Although their support for the dethroned King James II, who granted them the legally dubious title of Viscount Kenmare, cost them their estates under King William III, they recovered the land in 1720 and, unusually for Roman Catholics, retained their property throughout the Penal Laws era. The family came to be identified with the old Gaelic aristocracy.

Their seat moved to Killarney, and by the mid-C19th the castle ruins were already vestigial.

Nearby Ballinamona is the site of a Stone Circle.

Hospital and its environs grew considerably at the turn of the Millenium, and there are plans for future expansion.

Hospital is linked by the R513 to Ballylanders on ByRoute 5. Knockainy Hill (Cnoc Aine) was long venerated as the dwelling place of Aine, the Celtic goddess of the harvest. (Photo – www.themodernantiquarian.com)

For centuries on every Midsummer Eve the locals made tall reed torches called cliars and made a procession around her hill. They then spread out to wave the torches over crops and cattle to entreaty Aine for good fortune and abundance in the coming year. There are folk tales of Aine revealing herself to the locals on occasion on these eves.
In one such tale, collected by D. Fitzgerald, a number of girls had stayed late on the hill while watching the cliars. Aine appeared among them and asked them to go home as she and her people wanted the hill to themselves now. She called a few girls over to look through a ring where they saw a multitude of people on the hill who otherwise could not be seen.
Ancient structures on the hill include a damaged cairn marking the burial site of a long forgotten chieftain, three conjoined burial mounds, a Standing Stone and a strange enclosure containing another small cairn.

Knockainy / Knockainey / Knockaney / Aney is a small village on the River Camoge, with several attractive houses and a couple of good pubs.

According to Lewis (1837), this was the location of an  early Christian monastic centre of learning, allegedly founded in the C5th by Saint Patrick,  which became an Augustinian convent in 941 AD, was destroyed by Norsemen, and after reëstablishment in 1246 by the FitzGibbon family, survived until King Henry VIII’s 1540 Dissolution of the Monasteries.

Knockainy Castle is a ruined and overgrown C16th Tower House containing a spiral staircase. It is said to have been a FitzGerald stronghold destroyed during the Desmond Rebellions.

St John’s church (1861) is a handsome Victorian edifice with beautiful stained glass windows and excellent acoustics. It has an unusual bell tower and steeple, erected c.1600, and underground vaults dating from the C17th, while the old churchyard contains several interesting mausolea.  As the local Church of Ireland population is now too small to sustain it, the building is used as a cultural centre.

Herbertstown (Baile Híobaird) was  the scene of Land League agitation in 1887, organised by the local parish priest, Fr William Ryan, who was jailed for a month for inciting illegal acts. His release was greeted by jubilant crowds, including leading municipal authority figures, who escorted him 14 miles home from Limerick City, blocking the road to prevent police from following.