These pages describe ByRoute 6 between the DUBLIN outpost of Rathcoole and Knocklong (Co. Limerick) via:

Kill (An Chill – “The church”) (pop. 2500) is an attractive village on the River Kill just south of the M7. Although rapidly growing into a commuter satellite of DUBLIN, the community has its own distinctive character and regularly wins awards in the National Tidy Towns competition. (Photo by shotspoof)

Kill has a strong equestrian tradition, with several stud farms and racehorse stables in the vicinity, and is home to Goff’s Bloodstock Sales complex, the main auction house in Ireland for thoroughbreds and yearlings, and Holmstead Saddlery, the country’s largest equestrian accessories superstore. Local riding schools include the Old Mill Riding Centre and the Flannelly family’s Kill International Equestrian Centre, which has an Olympic indoor arena and state of the art training facilities.

Cill Corbain is listed in the annals as the burial place for nine kings of Leinster of the Ui Faelan dynasty (ancestors of the O’Byrnes) up to the C9th. Excavations for the widening of the N7 in 2004 unearthed evidence of early habitation, including a late Bronze Age/early Iron Age Hill Fort and three small Ring Barrows.

As Kill Hill, the village was a staging post on the old toll road to Kilcullen, the first turnpike to be built in Ireland (1729).

The Old House was originally built in 1794 as a coaching inn, and rebuilt in 1943. The sites of two former shebeens in the village are now occupied by modern shops.

The (empty) local RIC barracks was heroically burned during the War of Independence. 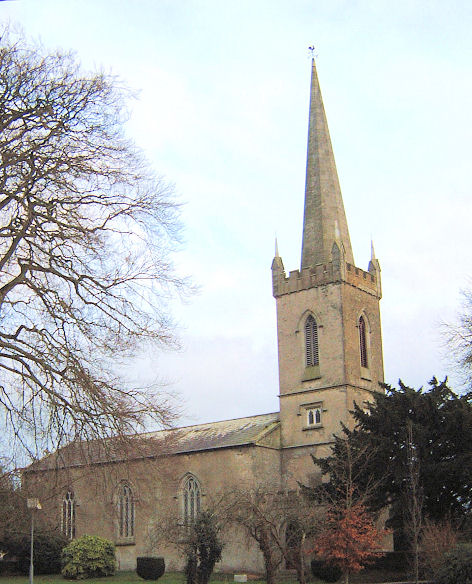 The edifice has a half door; these used to be quite common in churches but have almost completely vanished, and this particular example is reputed to be one of the last in Ireland.

St John’s has a beautiful German organ donated by the 7th Earl of Mayo, who lived in nearby Palmerstown House. Strangely, the normal positions of the black and white keys of the organ are reversed. Percy Jocelyn, local Rector c.1815, was later at the centre of such massive scandal, humiliation and disgrace as Bishop of Clogher (he was caught in a compromising position with a handsome young Grenadier Guardsman in a London pub) that he fled to Scotland and worked under an assumed name as a butler.

St Brigid’s church (RC) was built in 1821 and extended in 1973. It is said that the chapel bell was the first in Ireland to peal in celebration of Catholic Emacipation in 1829. (Photo – www.churches-uk-ireland.org)

Kill is west of Kilteel on ByRoute 5 and east of Johnstown on ByRoute 7.

Great Forenaghts is an ancient townland that derives its name (pronounced “Furness”) from the Gaelic Fornochta – “bare hill”, referring to the site of a famous megalith.

Furness House will look vaguely familiar to millions, as it has often been used as a film set (most notably for the TV series “The Irish RM“).

Described as ”a medium-sized country residence“, the Georgian mansion was built in the Palladian style in stages by the Nevill family between 1730 and 1800. The exterior is decorated with pilasters and lions around the door, with relief carvings of horses’ skulls signifying “old money”. The interior features attractive woodcarvings and ornate plasterwork, including a ceiling by Michael Stapleton.

The ruined church in the grounds traces its origins to c.550 AD; it was extended in 1210 after the land was bequeathed by Adam de Hereford to St. Thomas’ Monastery in Dublin. In 1650, Cromwellian troops led by Colonel Hewson burnt the church and the nearby Hartwell Castle. It has been roofless ever since, but the walls were restored by the OPW in 1968.

The Furness Yew adjacent to the church is one of the largest yew trees in Ireland. It is believed to predate the Norman church extension, and is probably the oldest living thing in County Kildare.

The C18th and early C19th gravestones in the former churchyard indicate that both Protestant and Catholic burials tookplace here.

The Longstone Rath, situated on a wooded hilltop on the Furness estate, comprises a 9ft-high circular earthwork enclosure, nearly 200ft / 60m in diameter, around a 20ft / 6m Standing Stone made of granite from at least 10 miles away.

No firm dating evidence is available, but the ring-work was probably constructed early in the second millennium BC and presumably belongs to the same general period as other megaliths in the area such as that at Punchestown a few miles away.

It evidently had some ritual and / or astronomical significance, and was later used as a burial / cremation site for two men, presumably chieftains.

The estate was walled in the 1840s as a work-creation scheme during the Great Famine. Since the mid-1990s it has belonged to a member of the Guinness family.

Forenaghts / Forenaughts is also the name of a Manor House built c.1720 by Richard Wolfe, whose grandfather from Durham had acquired land at nearby Baronsrath. Descendants included Arthur Wolfe, Baron Kilwarden, the Chief Justice murdered by a Dublin mob during Robert Emmet’s disastrous 1803 Rising, another Richard Wolfe, killed at the Battle of Abu Klee in the Sudan in 1885, and his brother George Wolfe, the last British-appointed Ranger of the Curragh and Cummann na nGaedhael TD for Kildare, who died at Forenaghts in 1941. The house remained in the family until the end of the C20th.

Punchestown (sometimes spelt Punchedstown) is a townland in County Kildare, nowadays best known for its Racecource.

Punchestown Racecourse is the home of Irish National Hunt racing and the National Centre for equestrian and field sports.

The course hosts 18 race meetings each year, with the undoubted highlight since 1861 being the four-day Irish National Hunt Festival held at the end of April, one of the premier Racing Festivals in the British Isles, nowadays simply referred to as ‘Punchestown’.

Punchestown is the only Irish racecourse to keep alive the old tradition of running cross-country races, and hosts Horse Shows, Hunter Trials and 3-Day Events of international calibre.

Punchestown is the location of two major Standing Stones. In a field directly opposite the main entrance to the racecourse is the almost conical Craddockstown West Menhir, over 4m tall and leaning distinctly westwards. The Longstone of Punchestown Great, in another field nearby, is at almost 7m /27ft high the tallest and arguably the most elegant of all Ireland’s Standing Stones. This tapering megalith was also tilted for many centuries; it fell down in 1931 and was re-erected in its otherwise empty stone-lined socket cist three years later. No surviving Irish Standing Stones is as tall as many in Brittany.

Punchestown is in the same parish as Rathmore on ByRoute 5.