The Uachtar Tíre (“Upper Country”), once the tribal lands of the O’Flanagan Clan, later named the Barony of Upperthird, is a region dominated by the wild Comeragh Mountains. Scattered with numerous lioses or Ring Forts and other ancient remains, it was a strong Irish speaking area even into the early years of the C20th. (Photo – www.rathgormack.com)

The region came to be known as Paoracha or Power’s Country as the Anglo-Norman Le Poer family multiplied and extended their influence from the late C12th onwards. Power is still undoubtedly the most common surname in the area, and for many years it was also that of the richest families. The Le Poer castles are amongst the oldest surviving buildings in the area, as earlier dwellings were made of timber or turf.

In 1535 King Henry VIII granted Sir Richard Power the title of Baron de La Poer and Curraghmore, and he and his descendants, the Marquesses of Waterford, together with their relatives at Gurteen De Le Paor outside Kilsheelan, owned nearly the whole territory. Described in the Down Survey of 1654 as “cold and course land“, it nonetheless proved a lucrative source of rents and levies.

In the C18th the area was known for highwaymen and bandits, the most famous being William Crotty. Some of these outlaws were probably dispossessed Roman Catholic landowners.(Image – www.rathgormack.com)

The early part of the C19th saw two gangs, the “Gows” and the “Poleens”, stage frequent faction fights at fairs and other social gatherings of the day. The Pattern of Mothel was abandoned due to the scenes of degeneration and excess. The gangs evidently viewed the fights as recreational even though loss of life was common.

During the Great Famine of 1845-49, rents went up and families were evicted, in some instances as their dwellings were destroyed. Some people migrated from their home areas to settle on “rent-free” land around Coumshingaun Lake. Living conditions in those remote areas must have been appalling. Relief schemes were started in 1846 to provide labour and a source of income in the area. Roads were widened and repaired, and a “New Line”, as the road is still known, was cut and built between Carrick and Lemybrien.

In the late 1840s the district saw unrest and lawlessness. James Stephens and Michael Doheny, two of the leaders of the Young Irelanders, found refuge in the area in 1848 following their abortive Cabbage Patch Rebellion.

A local landowner of the time, John Hearne, reported that the area was a nest for rebels, saying “The farmers there are a curse to the country. They oppress the labourer, and rob the landlord. You have none or few of their sons in the army or navy, but in the ranks of the enemies of British rule you will find densely congregated“. The unrest continued for a number of years, with attacks and reprisals such as the burning of the Rathgormack police station.

The Troubles between 1918 and 1922 saw a lot of IRA activity in the area, due to the willingness of the local population to aid the “Flying Columns” and the many hiding places in the Comeragh Mountains. One of the worst instances was the 1921 murder of RIC District Inspector Gilbert Potter by members of the 3rd Tipperary Brigade under Dinny Lacey. By the end of hostilities Rathgormack had 30 men in F Company of the 8th Battalion, Carrick-on Suir. Mothel/D company had 57 men, Clonea/E company had 72 men and Windgap/G company had 30 men.

Sean and Sile Murphy‘s books The Comeraghs – Famine, Eviction and Revolution and The Comeraghs – Refuge of Rebels both published by Phoenix Publications, make interesting reading.

Mothel began as a C6th monastery founded by Saint Brogan, whose identity and history are disputed; his successor was Saint Coan. The site of this early establishment was close to the present Holy Well of Mothell at Ballynevin.

Mothel Abbey was founded as an Augustinian establishment in the C13th. Its abbot controlled a large tract of mid-Waterford for hundreds of years until King Henry VIII‘s 1540 Dissolution of the Monasteries, when the lands were seized by the La Poer dynasty and Curraghmore Estate was established.

The abbey is now an atmospheric ruin, with an adjoining cemetery being the final resting place to some of the wealthiest people in the area’s past, such as the La Poer family.  (Photo – www.rathgormack.com)

The surviving termon stone is still called Cloc an Comairghe –  “Stone of Sanctuary.”

Mothel is also the location of a fine prehistoric dolmen.

Clonea is the location of a ruined Le Paor castle.

The church of SS Coan & Brogán (RC) is beautiful neo-Gothic style edifice designed by JJ MacCarthy and erected at a cost of £6,000 in 1860.  The bronze crucifix over the high altar is said to have been found around that time buried near the ruined church at Rathgormack.

Clonea is connected by road to Kilmacthomas and is near a scenic stretch of the R676 to Mahon Bridge, both on ByRoute 2.

Rathgormack / Rathgormuck, site of another ruined Le Paor castle, is an ideal base for walkers and climbers to explore the Comeragh Mountains.

Crotty’s Lake, properly Lough Coum Gabthartha, is remembered for the cave overlooking the wild and beautiful lake that early C18th highwayman and Robin Hood figure William Crotty used as his hiding and look out place. He was betrayed by his one-time accomplice David Norris, and hanged, drawn and quartered in Waterford City in 1742. His wife, after supposedly penning the famous Lament for William Crotty, threw herself from Crotty’s Rock on the cliffs to her death below.

Coumshingaun (Coum Seangan – “Pissmire Valley” / “Ants’ Hollow”) features the second most famous lake in the Comeraghs, said to be one of the best examples of a corrie lake in Europe. It’s a spectacular coum that impresses no matter how often visited.

The lake has been best described by Patrick Werner in his Visitors Guide to the Comeragh Mountains, published by the Blackstaff Press in 1978: “Whether you speak of it as the geography textbooks do, as a magnificent example of corrie glaciation with the loch held up by a large black moraine or whether you see it as a guidebook says ‘of unknown depth, associated with irresistible currents and evil spirits’, in short whether you are practical or romantic, you are certain to be impressed“. (Photo – www.discouts.ie)

He adds: “I have seen it through a dazzle of sunshine, through swirling clouds of snow, through driving rain hissing off its surface and appearing and disappearing as mists eddied up and down the precipices and I have never failed to find it beautiful. Perhaps it is best to leave it at that“.

Fauscoum (“Wild Growth Hollow”) on the left hand side of Coumshingaun is an unusual dry coum. The striking cliffs of neighbouring mysterious Foill an Priosun are home to an elusive herd of feral goats.

Rathgormack is within striking distance of Kilsheelan near Clonmel (Co. Tipperary).

The Nier / Nire Valley region is famous for its varied and beautiful landscape and superb fishing. A local tourism group has identified a series of walks ranging from two to four hours duration. Fishing permits can be arranged through any of the guesthouses in the area.

Ballymacarbry is an exceptionally friendly community, regarded as the “capital” of the Nier Valley.

Hanora’s Cottage, 5km outside Ballymacarbry, is a very highly rated B&B with a good restaurant.

Knockaun Woods is at its best in spring and autumn. 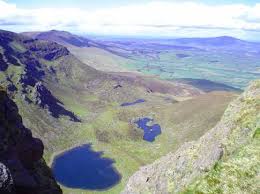 The Sgilloge Loughs – Coumstelloge More and Beg (anglicised over the years, hence the different forms of spelling) are beautiful. The cliffs rise steeply from the edge of the lakes and a small waterfall cascades down from the top.

The Coumalocha, the widest coum in the Comeragh Mountains, entails a longer walk.  The almost rectangular Lough Coumfea, a short distance due west, should also be visited.

The Knockanaffrin Ridge, to the north-east, can also be reached from the Nier carpark; Coum Iarthar and Crotty’s Rock lie almost due east through the Gap.

Guided Walks of the Valley are available every Saturday in season, starting at 10:30 am and lasting about 6 hours.

The Autumn Mountain Walking Festival is held annually on the second weekend in October. The local pubs join in the spirit of the event, and traditional music can be enjoyed in several venues.

Ballymacarbry is quite close to Clonmel (Co. Tipperary). and is not far from Knockboy and Millstreet on ByRoute 2.