Knocktopher (Cnoc an Tóchair) (pop. 450), a pleasant little village, gave its name to a medieval cantred that became an important barony, historically aka Knocktofer / Knocktover. A detailed early history can be read here.

Knocktopher Abbey was founded by James Butler, 2nd Earl of Ormond, for the Carmelite Order of Friars in 1356, and was the family seat of the Langrishe family, the Lords of Ballyhale from 1679 until 1981. Nowadays, it comprises a C19th mansion built on the site of Norman castle, of which the keep can still be seen, and incorporating parts of the original Abbey. One of the country’s only three Holy Trinity Wells is in an original C13th vaulted room, and the owners claim the building has the oldest working chimney in Ireland.

The Abbey is currently a luxury self-catering time-share resort.

St David’s church preserves some sections of a medieval wall with a window, and most of a tower with a C12th Romanesque arch and an octagonal top thought to have been added later. Under the tower is an impressive double-effigy tomb, dating from the C14th or C15th, and some early carved stones. 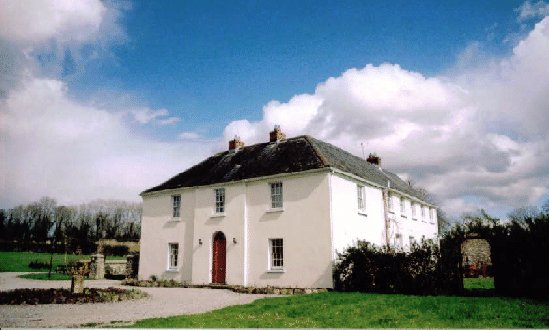 Croan House, between Knocktopher and Dunamaggan, probably dates from before 1743, when the facade was added by the Shirley family, long time residents and land owners in the area. In 1807 John Shirley was divorced by Naomi Reade (whose brother later commissioned nearby Rossenarra House), and the estate passed down through her family to the colourful sisters Mary and Kate Reade, still remembered as local eccentrics.

The current owners run the property as a working farm; they keep large black pigs, exotic sheep and goats, guinea fowl, geese, ducks and several species of hen, and have maintained the beautiful lawns, a broad avenue of mature lime trees, a splendid walled garden, a duck pond and a boules court.

The grounds include attractive self-catering holiday cottages with views over the neighbouring wooded Castlemorres estate.

Sheepstown church, now ruined, dates from the early C12th, with later additions and some interesting features.

The Carrickshock Incident refers to an attack that took place at the townland of Carrickshock near Knocktopher on the 14 December 1831, at the height of the Tithe War, when a crowd of locals attacked a tithe proctor and a detachment of constables who were escorting him, throwing rocks, kicking, gouging and stabbing until the collector / server, twelve policemen and three peasants lay dead. Many were wounded when the constables fired upon the people. A detailed account is available here. A monument in the form of a Celtic Cross commemorates the event. Aghaviller church (CoI), still used for occasional services, is a large C12th building with a C15th residential addition reached by a mural stairway, giving the structure a castle-like air. (photo by Humphrey Bolton)

The churchyard contains the vault of the Morris family, C18th owners of the adjoining Castlemorres estate, the dense woods of which can produce creepy sensations on an overcast day.

Aghaviller Round Tower is a handsome slate-coloured sandstone edifice standing 9.6m tall. Nothing is known of the monastery here or who founded it. The oldest  reference to the tower is in the Statistical Survey of 1802. The original NE-facing doorway, over 4m above the present ground level, was long blocked up; the lower doorway was probably inserted to install a church bell.

A Holy Well lies nearby.

Kilmoganny / Kilmaganny (Cill Mogeanna), derives its name from Kil mo Eugahn – “church of (my beloved) Eugahn / Eugene / Owen”, patron saint of the  family headed by The Walsh of the Mountain, who dominated the highlands known as the Walsh Hills overlooking the central plain of County Kilkenny.

Castlehale, aka Castle Hoel, Castle Howell and Castle Hoyle, founded by Howell, son of Philip, in the C13th, was the  manor seat of the  same family for some four centuries.  One of the last occupants was Walter Walsh (d.1619), who built a major extension in the Tudor style; married to Lord Mountgarrett‘s daughter Ellice (née Butler), he was famed for his hospitality. (Image – Walsh webpage).

William Tighe wrote (c.1800) “Appearing in arms against Cromwell, they (the Walshs of the Mountain) were totally defeated by a detachment. Many were executed on the spot, and their bodies buried in the same place. Since that time none of the family have existed as landed proprietors, but the name is frequent among the country people.”

(In fact the last scion of the Walsh of the Mountain dynasty was helped by the Butlers of Ormonde to recover nearby Clonassy Castle, and later “came out of France” with King James II to fight in the Williamite War, was outlawed and attainted by King William III, and killed at the Siege of Limerick in 1691).

The sad fate of the once powerful family was lamented and bewailed in a traditional Gaelic caoineadh poem, translated here.

The stronghold belonged for almost two hundred years to the descendants of a Cromwellian financier called Sheppard, granted castles and lands in Counties Kilkenny and Tipperary; the family sold their various properties  in order to emigrate to Canada in 1849.

Rev. Carrigan’s History and Antiquities of the Diocese of Ossory, published in 1905, shows a contemporary photograph of Castlehale. No trace of the edifice is visible today.

Castlemorris, aka Castle Morres, was the estate of the Morris family, who got a grant of land here following the confiscations of Walsh possessions in 1653. In the C19th it was the property of Harvey de Montmorency Esq, a notorious absentee landlord. The mansion (1751) no longer exists; all that remains are the prominent Grand Gates that dominate the village. The 500-acre demesne, largely given over to forestry, is exploited seasonally by the Castle Morres Pheasant Shoot.

Rossenarra House is a large Palladian mansion built c.1825, thought to have been designed by  James Hoban, architect of the White House in Washington DC.

The house was commissioned by Maurice Reade, formerly resident in Old Rossenarra in County Wexford, who changed the name here to Rossenarra Demesne. It passed through several generations of the Reade family until the 1880s when it came into the possession of the McEnery family. The artist Sir John Lavery spent his last years in Rossenarra, and died here in January 1941.

Richard Condon, author of The Manchurian Candidate and Prizzi’s Honor, lived in Rossenarra from 1971 until he returned to the US in 1980; his  memoir, And Then We Moved to Rossenarra; Or The Art of Emigrating (1973), was named in honour of his time here.

The photogenic village is home to a famous local Hunt (the Kilmoganny Harriers) and a drama group called the Srughawadda Players.

Currahill Castle, originally a five-storey Tower House, is said to have been a Butler stronghold, possibly occupied by members of the Walsh of the Mountain dynasty. The Sheppard family are known to have owned property at Snugsborough and “Kerrihill”. (Thanks to Annette Rance for this photo; John O’Meara provides a detailed description and more photos here). The edifice gave its name to a successful racehorse.

Currahill Castle Farm was run for a time by a German couple who offered accommodation to their compatriots, but was put up for sale in 2007.

(Special thanks to Jane Stein for helpful information in this section)

Windgap (Beárna na Gaoithe – “Gap of the Wind”) is a village attractively surrounded by steep hills and woods. The name is pronounced “Winegap”, and natives are referred to as “Gappers”.

Killamery was the site of a monastic community founded c.632 AD; a particularly fine but badly weathered C9th sandstone High Cross bearing a Sun Swastika and dragon-snakes survives. Two Bullaun Stones, a Cross Slab and a Holy Well are also to be seen nearby.

The Killamery brooch, unearthed locally in the mid- C19th, is a C9th Hiberno-Viking work on display in the NMI.

Killamery is linked by scenic stretches of the N76 with Clonmel and Callan, and by a rural back road with Mullinahone, all on ByRoute 4.

Ahenny, overlooked by Slievenamon, used to be a thriving mining community.  Most of the C19th houses are now in ruins, but the main street is still intact, bringing to mind villages that can be found throughout the countryside of North Wales. The bucolic surroundings are very pleasant.

Nearby flows clear crystal water, reputed to have healing power for headaches and other infirmities.

Knockroe (Cnoc Rua – “Hill of Red Sandstone”) is the location of the Knockroe Passage Tombs, known locally as The Caiseal / Cashel. This is considered one of the most significant recent archaeological finds in Europe, and is still subject to ongoing investigation by the UCD Department of Archaeology.

Ireland’s most southerly passage tomb is decorated with a frieze of quartz, like the more famous Newgrange (Co. Meath), and is carefully aligned towards the rays of the sun at the Winter Solstice (21st December), but uniquely in Ireland, this 5,000-year-old cairn has separate eastern and western chambers, so that one is illuminated at sunrise and the other at sunset. The tall red sandstone portal is impressive, and there is interesting rock art, but the site has obviously been damaged over the years.

Local legend says those of Gaelic ancestry can hear a Banshee wailing when they stand at the tomb.

The Lingaun River Valley, straddling the border between Counties Kilkenny and Tipperary, was the site of the old Ormond and Victoria Slate Quarries, where local villagers used to work until the time of the Great Famine. 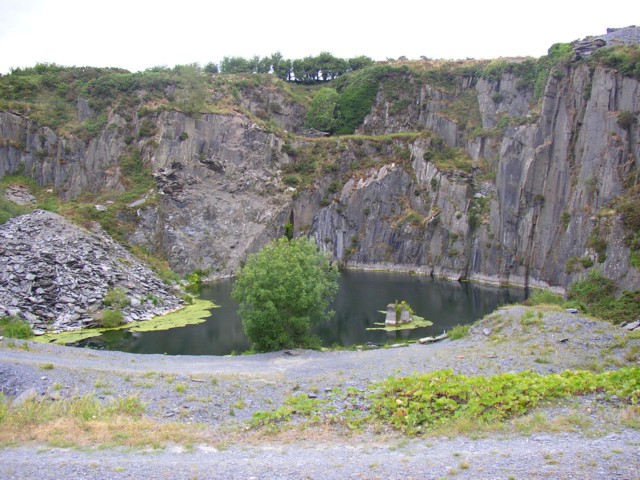 The valley is bizarrely beautiful, its leafy upper reaches contrasting with dark cliffs overlooking a lake reminiscent of the Marshes of Mordor. (Photo by Humphrey Bolton)

Nowadays the valley is  the setting for a number of modern sculptures, added to annually at a series of summer festivals held since 1992 and reputed to be very good fun.

Tullahought / Tullahaught is an attractive village with a mile-long main street called The Pavement, constructed during the Great Famine and long used by Bianconi coaches. A local women’s initiative has involved the recent (re-) construction of several traditional dry stone walls, and an elevated Viewing Tower overlooking the village commands panoramic vistas of the surrounding countryside..

Killmacoliver Hill (261m) is the location of a newly developed 6km loop trail for walkers. The summit features the old Burial Ground, believed to be a 5000-year-old tomb, and a block of stones bearing  curious carved figures.

Kilkieran / Kilkeeran is an ancient monastic site with three beautiful High Crosses; together with those of Ahenny and Killamery, these are traditionally believed to be memorials to “The Seven Bishops“, locally born septuplets who supposedly all reached Episcopal rank in Rome and were killed for their baggage on their return by the wicked Countess of Granny at Ath na gCeann in nearby Lismatigue. Also visible is the family mausoleum of the Osbornes of Kilmacoliver Castle.