Thomastown (Baile Mhic Andáin – “MacAnthony’s Town”) (pop. 2500), scenically located on the River Nore, is the second biggest town in the County of Kilkenny.

Grennan Castle, the impressive remains of which can be seen on the outskirts of the town, was built c.1210 by Thomas FitzAnthony Walsh, son-in-law of William Marshal, Seneschal of Leinster, who granted him a large area of land in the region then known as Ogenti. Most unusually, the settlement gradually became known by its founder’s Christian name in English and his surname in Gaelic. The town grew and came to be surrounded with a wall incorporating 14 towers.

The River Nore has been spanned at Thomastown since the C13th; for hundreds of years the single wooden bridge was the only crossing between Kilkenny City and New Ross. In 1649 it was partially dismantled to deny Cromwell’s troops entry to the town, but in the following year, coming from Kilkenny direction, they gained entry, and the garrison used the now repaired structure to escape.  The Ironsides destroyed the wall, towers and most of the castle in 1650, but did not end Thomastown’s commercial importance. The timber bridge survived until swept away in the “Great Flood” of October 1763 that caused 18 deaths, and its replacement was considerably damaged in November 1787. 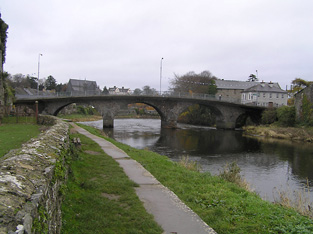 The present bridge, one of several (re-)constructed in the region by George Smith, dates from 1792; it too was damaged in another major flood of 1947, when many low-lying houses were inundated to depths of 2m / 6ft or more, and rather crudely expanded in 1973. Flooding again caused extensive damage in late 2009. (Photo – www.buildingsof ireland.ie)

Thomastown is home to Ireland’s only dedicated Craft School, housed in a converted mill, and many artists and musicians live locally.

The church of the Assumption (RC), completed in 1867, contains the old high altar of the Cistercian Abbey at Jerpoint and also a splendid modern altar.

A Watergarden with herbaceous borders, water plants and tinkling fountains is located at the top of the colourful and attractive main street of the town.

All That Glisters Rock & Fossil Shop at Ladywell Corner was founded in 1988 by Sue Bowden, who designs and makes a variety of products using natural gemstones, crystal and fossils.

Thomastown has several great pubs (notably O’Grady’s) and at least one good restaurant.

Thomastown is well-known in GAA circles for its hurling prowess. Kayaking and fishing on the River Nore are also popular activities.

Thomastown is not far from Dungarvan and Tullaherin on ByRoute 4.

Dysart Castle, an early C16th edifice built on the site of a former monastery beside the River Nore, was the birthplace of the philosopher George Berkeley. Nowadays best known for the annual Dysart Rock Festival, the beautiful wooded estate has long been the venue of the Kilkenny Hunter Trials. The castle grounds can be hired for large wedding receptions etc., and there are also a couple of self-catering holiday cottages, notably a riverside fishing lodge.

Mount Juliet House, named by the 1st Earl of Carrick in honour of his wife, is a magnificent Georgian mansion set on a hill overlooking the River Nore. (Photo –www.failteireland.ie)

The beautiful 1,500-acre walled estate has an interesting history (e.g. after the Restoration, part of it belonged to James, Duke of York, later King James II).

Mount Juliet is nowadays run by the Conrad chain as a luxury hotel, noted for fine dining.

Excellent equestrian facilities go well with fields grazed by mares and foals at Ballylinch Stud, which has operated successfully since 1914. There is also a golf course.

Kilfane derives its name from a monastic community founded in the very earliest Christian times by Saint Paen / Phane, said to have been the son of an Ulster king and a Welsh mother.

Kilfane church, a ruined C13th edifice with an adjacent stone presbytery, was in use as a CoI place of worship until 1835, when it was replaced by the larger building nearby. The older structure is most noted for its larger-than-life effigy of the C14th knight crusader Thomas de Cantvell, known as Cantwell Fada / Long Cantwell, the tallest sculpture of its kind in the British Isles.

Kilfane Castle, long in ruins, was the Cantvell / Cantwell stronghold; the family were Lords of Kilfane until the Wars of the Three Kingdoms, when one had to be shot by Kilkenny Confederacy leaders for indiscipline, and their lands were confiscated in the Cromwellian redistributrion.

Kilfane House, an elegant Georgian country residence, was the home of Captain John Power, who together with his wife Harriet (daughter of Col. Gervase Bushe, whose family had owned Kilfane since Cromwellian times) began to landscape the demesne c.1790, and with his twin Richard founded the Kilkenny Private Theatre and the Kilkenny Hunt Club. Both brothers were subsequently knighted.

Kilfane Waterfall & Glen; this romantic woodland garden has been restored by Mrs Susan Mosse, with winding paths, a cascading stream, a waterfall, a hermit’s grotto, a tiny cottage orné and an adjoining forest where gravelled walks lead to intriguing works of modern art. (Photo – www.nicholasmosse.com)

The Stroan Fountain, a bizarre structure with a dome and obelisk, erected in 1766, was still in use within living memory. It received national media attention in August 2010, at the height of the financial crisis, when the government granted sizable funds for its conservation and repair. The Irish Times quoted the late Mariga Guinness, President of the Irish Georgian Society,  as saying that Ireland had more follies per acre than anywhere else in the world.

Jerpoint Abbey, a splendid C12th monastery with later additions, is the best-preserved Cistercian ruin in the country. A national monument, the complex is most interesting, with displays of medieval craftsmen’s skills in its construction.

The abbey was established in 1180, probably on the site of an earlier Benedictine monastery founded in 1160 by Domnall Mac Gilla Patraic, King of Ossory.

The oldest parts are the Irish-Romanesque transepts and chancel, containing faded wall paintings said to be stylised portraits of saints, and  the tomb of the Bishop of the Diocese of Ossory when the abbey was founded,  Felix O’Dulany (d. 1202).

The long nave was completed before 1200. Visitors can still climb the stairs the monks ascended after night office.  The roof commands fine views of the surrounding countryside. The magnificent central tower was added in the C15th. 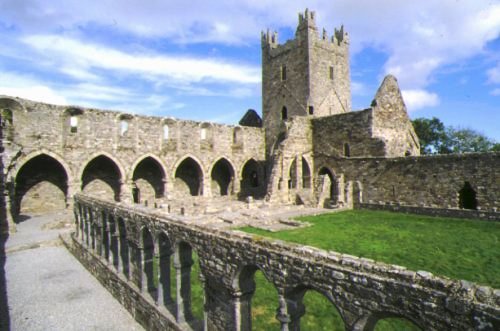 The restored cloister features charmingly embellished sculptures of lords and ladies, bishops, dragons, and even a man with stomach-ache,  reminiscent of  drawings found on medieval manuscripts. (Photo – Gaelscoil Osraí)

The Abbots of Jerpoint were lords of Parliament. In 1380 it was ordained that no mere Irishman should be permitted to make his profession here.

After King Henry VIII‘s 1540 Dissolution of the Monasteries, Jerpoint Abbey and its land became the property of the Earls of Ormond.

Newtown Jerpoint, once a thriving village, is recalled only by a ruined church, founded in 1170 and derelict since the C17th. Local legend has it that a C13th slab marks the spot where  Hiberno-Norman Crusaders returning to Kilkenny buried relicts of the Anatolian bishop Saint Nicholas of Myrna, aka Santa Claus.

Abbey House is a charming C18th farmhouse run by Helen Blanchfield as a pleasant B&B. The book-lined living room is equipped wih a piano, and the Little Arrigle River flows through the grounds.